Italy is located in Southern Europe and comprises the boot-shaped Italian Peninsula and a number of islands including the two largest, Sicily and Sardinia.

It lies between latitudes 35° and 48° N, and longitudes 6° and 19° E. Although the country occupies the Italian peninsula and most of the southern Alpine basin, some of Italy's territory extends beyond the Alpine basin and some islands are located outside the Eurasian continental shelf. These territories are the comuni of: Livigno, Sexten, Innichen, Toblach (in part), Chiusaforte, Tarvisio, Graun im Vinschgau (in part), which are all part of the Danube's drainage basin, while the Val di Lei constitutes part of the Rhine's basin and the island comune of Lampedusa e Linosa is on the African continental shelf. 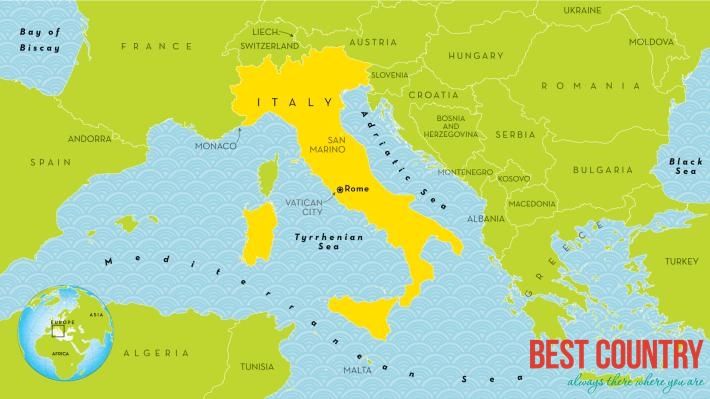 The country is situated at the meeting point of the Eurasian Plate and the African Plate, leading to considerable seismic and volcanic activity. There are 14 volcanoes in Italy, three of which are active: Etna (the traditional site of Vulcan’s smithy), Stromboli and Vesuvius. Vesuvius is the only active volcano in mainland Europe and is most famous for the destruction of Pompeii and Herculanum. Several islands and hills have been created by volcanic activity, and there is still a large active caldera, the Campi Flegrei north-west of Naples.