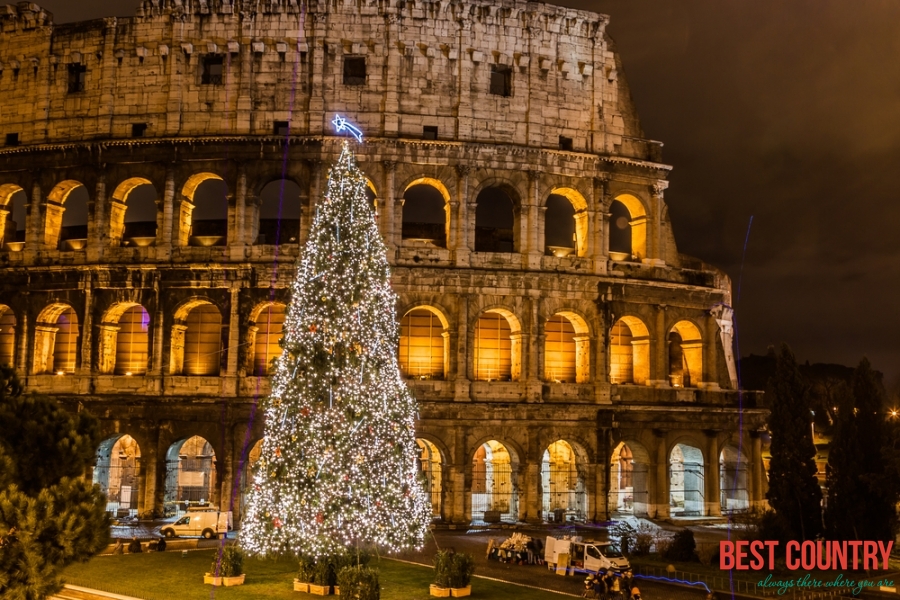 Christmas season in Italy is traditionally celebrated December 24-January 6, or Christmas Eve through Epiphany. This follows the pagan season of celebrations that started with Saturnalia, a winter solstice festival, and ended with the Roman New Year, the Calends.

However there are lots of Christmas things to see during December prior to Christmas, many starting on December 8, the Feast Day of the Immaculate Conception.

Although Babbo Natale (Father Christmas) and giving presents on Christmas are becoming more common, the main day for gift giving is Epiphany, the 12th day of Christmas when the three Wise Men gave Baby Jesus their gifts.

In Italy, presents are brought by La Befana, who arrives in the night to fill children's stockings. More about Epiphany and La Befana

Christmas decorations and trees are becoming more popular in Italy. Lights and decorations are often seen starting around December 8, the Feast Day of the Immaculate Conception, or even the end of November.

The main focus of decorations continues to be the presepe, Nativity scene or creche. Almost every church has a presepe and they are often found outdoors in a piazza or public area, too.

Traditional bonfires are often held on Christmas Eve in the main square of town, especially in mountain areas. Dinner on Christmas day is usually meat based.

Naples is one of the best cities to visit for Nativity cribs. Naples and southern Italy have other Christmas traditions, including the Christmas Eve dinner of the seven fish dishes, although it doesn't really have to be seven fishes and not everyone serves it. Naples Nativity Pictures

Bagpipe and flute players, zampognari and pifferai, are a part of Christmas celebrations in Rome, Naples, and southern Italy.

They often wear traditional colorful costumes with sheepskin vests, long white stockings, and dark cloaks. Many of them travel from the mountains of the Abruzzo region to play outside churches and in popular city squares.

Rome is another top city to visit during the Christmas season. There's a large Christmas market, nativity displays, and several huge Christmas trees. Here's what to see in Rome during Christmas Season.

Saint Peter's Square in Vatican City hosts the popular midnight mass given by the Pope inside Saint Peter's Basilica. Those in the square see it on big screen TV.

At noon on Christmas day the Pope gives his Christmas message from the window of his apartment overlooking the square. A large tree and nativity scene are erected in the square before Christmas.

Torino is one of the best places for lights. Over 20 kilometers of streets and squares are illuminated by some of the best illumination artists in Europe from late November through early January.

Near the top of Monte Ingino, above Gubbio in central Italy's Umbria region, shines a huge Christmas tree, 650 meters tall and made up of more than 700 lights.

In 1991 the Guinness Book of Records named it "The World's Tallest Christmas Tree." The tree is topped by a star that can be seen for nearly 50 kilometers. Tree lights are turned on every year on 7 December, the evening before the feast of the Immaculate Conception.

Città di Castello, in Umbria, celebrates Christmas Eve in on the Tiber River.

Towards evening, a group of canoeists, each dressed as Father Christmas, with their canoes illuminated by lights, make their way along the river to the bridge at Porta San Florido where a crib is suspended over the water.

When they get out of their canoes, they give small presents to the children gathered there.

In Abbadia di San Salvatore, near Montalcino, the Fiaccole di Natale or Festival of Christmas Torches (Christmas Eve) is celebrated. Carols and torchlight processions in memory of the shepherds from the first Christmas Eve.

Cortina d'Ampezzo in the Alps celebrates with a skiers torchlight parade - At midnight on Christmas Eve hundreds of people ski down an Alpine peak carrying torches.

For the Italophile on your gift list or a gift for someone planning a trip to Italy, check our Italy Gifts Guide for suggested books, films, and music.