What to Drink in Iceland

In France, Spain and Italy, it’s wine. In Portugal, it’s port. In Germany and Czech Republic, it’s beer. In Russia, it’s vodka. And in Denmark it’s akvavit. Most European countries seem to have a signature drink, and Iceland is no exception.

While the most traditional of drinks in Iceland is Brennivin – affectionately called the black death – it’s not the only homegrown option. Here’s what you need to know about drinking options in Iceland. 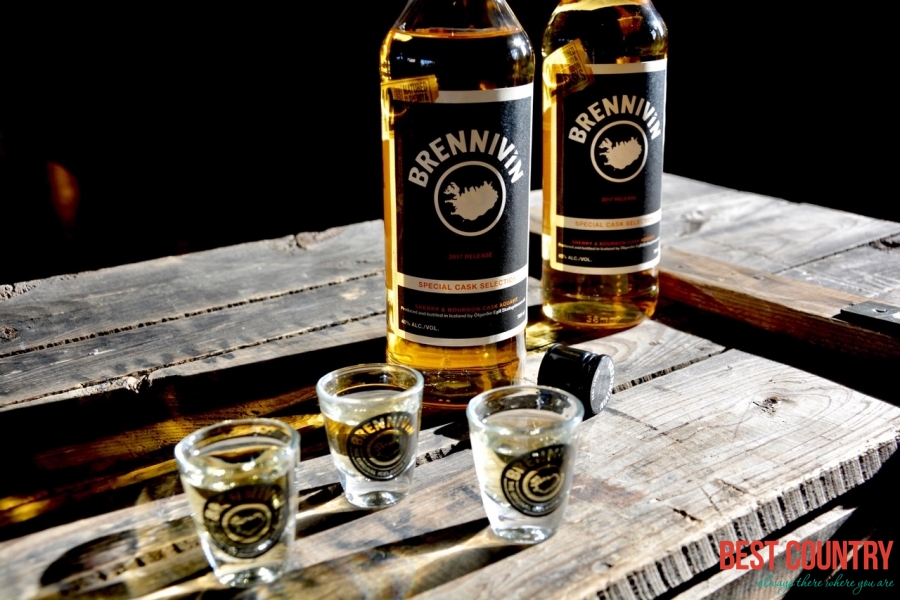 Brennivin is an Icelandic schnapps made from fermented potato pulp and flavoured with caraway seeds. The word brennivín literally translates into burning wine, and it certainly has a strong and distinct taste.

It’s often served alongside the delicacy of hákarl (putrefied shark meat) to mask the meat’s taste. It was nicknamed the black death because of the black label and the fact that many people drank it until they passed out – or fell under the “black death.”

Brennivin is a traditional drink for the mid-winter feast of Þorrablót but many Icelanders do not regularly drink it. In fact, over time it has developed a bit of a reputation as the alcoholics’ drink, because it is fairly high in alcohol content yet is one of the cheaper liquors available in the country.

Still, if you want to try it, you can pick up mini bottles at the airport duty free, or as for a shot in a bar.

Reyka is Iceland’s first (and only) distillery and produces a fantastic vodka that is available at the airport duty free, local liquor stores, and at many bars and restaurants.

It’s a small batch vodka made from a unique still, using geothermal water from a local spring, lava rock for filtration, and geothermal energy for heat. Drunk on it’s own or in a cocktail, it’s made using Iceland’s natural resources and creates a very smooth, drinkable vodka.

Beer has a bit of a rocky history in Iceland. In fact it was banned (along with all alcohol) from 1915 to 1925 and remained illegal until March 1, 1989. The country’s oldest brewery Ölgerðin, continued making beer for export during that time; they also made a non-alcoholic beer and several types of soft drinks.

Nowadays, Icelanders drink over 81 liters of per person annually, choosing from Viking, Egils, Skjálfti, Thule, Gull, Kaldi, Gullfoss and a few smaller microbreweries. In bars and restaurants, beer is definitely the cheapest choice, and the most popular. A pint of beer in most bars will set you back 600-800 ISK ($6-8 US).

When it comes to non-alcoholic beverages, including Appelsin (a fruity soda) and malt (a dark and sweet malt beverage that is considered nutritious and good for upset stomachs) are the most popular choices.

Bland, a mix of Appelsin and malt, was created in 1956, and soon became a popular drink at Christmastime. Now Icelanders drink over 16 liters of malt (mostly in the form of bland) each holiday season.