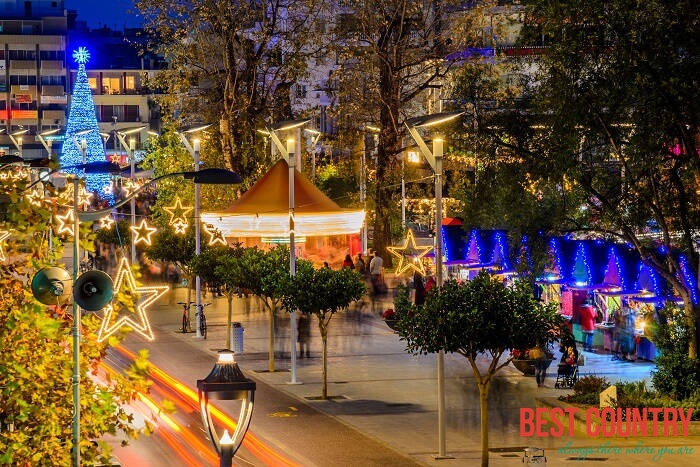 Are you trying to decide where to go on your Christmas holidays and still haven't made up your mind? Why not consider Christmas in Greece? True, it is not the traditional Christmas holiday destination, but it has so much to offer that it will be one of the most unforgettable holidays in your life!

There are two sides to Christmas in Greece; one is religious and solemn, while the other is festive and glamorous.

Both of them have their charm. Most towns in Greece are decorated with bright lights, bells, angels and other Christmasy objects. According to Christmas traditions in Greece, the patron saint of the holiday is Saint Nicolas, who is also the protector of sailors.

For this reason, you will often see boats decorated with many sparkling lights, rather than the traditional Christmas trees. The Christmas season in Greece begins on December 6 th, which is Saint Nicolas day, and ends on January 6 th, which is the Feast of the Epiphany (Theophania).

Celebrations really pick-up from the 20 th of December, as Christmas day gets closer. If you are an amateur photographer, you will be constantly taking Christmas pictures in Greece.

Shops are decorated with all the usual Christmas ornaments, and an upbeat atmosphere is apparent as you walk along the streets and in the shops. Therefore, Xmas shopping in Greece isn't just shopping. It's a festive experience!

If you come to Greece at Christmas, you will have the opportunity to attend a wide variety of events and festivities.

In the country's major cities, such as Athens, Thessaloniki, Patra, Heraklion, etc, the municipal authorities organize music concerts, theatrical performance, and a number of other cultural events.

Christmas in Athens is a fantastic time of the year. The largest Christmas tree in Europe is lit in Syntagma Square, the location of the capital's Christmas village, where little elf houses sell candy and children can take part in a number of activities. There is no limit to Christmas fun in Greece!

Greece is a country where traditions and customs are a part of everyday life. Most holidays in Greece are celebrated traditionally, and Christmas in no exception.

Christmas caroling is very popular, and although you might hear them being sung at any given moment during the holiday season, there are actually three "official" caroling days.

The custom is that children go from house to house singing the carol, with the accompaniment of a triangle, and residents of the houses give them a small amount of money. Greek Christmas carols (calanda) are sung on the mornings of Christmas Eve, New Year's Eve and January 5, the Eve of the Epiphany.

According to tradition, during the Greek 12 days of Christmas (December 25 to January 6), goblins come out to tease people and eat their food. This tradition is based on the legend that the "waters aren't christened" since Christ has not yet been baptized.

The goblins are renowned for their ugliness and their impishness. They are not very intelligent and can't really hurt anybody. It is said that they enter houses through chimneys, and this is the reason people, especially in villages, keep the fireplace lit during the 12 days of Christmas.

In many parts of Greece, people hang a pomegranate above the front door of their house. By the New Year, when the fruit will have dried, Greeks throw it on the ground so it breaks, and step into their house on their right foot. According to tradition, this brings good luck for the year to come.

Christmas, like many other holidays in Greece, is a time for feasting. In the past years, Christmas turkey has become very popular as the main dish of the holiday.

Traditionally, the main course of Christmas dinner in Greece is roast pork, with a variety of side delicacies. No matter what the main dish is, one thing is certain: Christmas food in Greece is delicious!

Melomakarona and kourabiedes are the two varieties of Christmas and New Year's cookies in Greece. The first are semolina, cinnamon, and clove cookies drenched in honey, while the second are rosewater and fresh butter cookies sprinkled with powdered sugar that are normally served on New Year's but many succumb to temptation and begin consuming them earlier.

Christopsomo is the bread that is made on Christmas Eve, which has a cross carved into the top crust before it is baked. On Christmas Day, the head of the household makes the sign of the cross above the loaf of bread, cuts it and gives a piece to each person at the dining table.

Vasilopita is a cake that is eaten on New Year's Day. Before the cake is baked, a coin covered in foil is placed in it. The New Year is written on top of the cake with almonds. The person who cuts the cake makes the sign of the cross three times above it and then starts serving the pieces, one to each person, the house, Christ, The Virgin Mary and Saint Vasileios. Whoever has the coin in his piece of cake will have luck for the rest of the year.

Due to the nature of the Christian Orthodox religion, Christmas is a very religious holiday in Greece. The season starts of with Saint Nicolas day and continues with many other saints' days up till Christmas. It is customary for those of faith to go to church on Christmas morning for the religious service.

New Year's Day is also Saint Vasileios day. The Christmas season winds down with the Theophania on January 6 th. On this day around Greece, waters are blessed and a cross is thrown into the waters. Dozens of brave young people dive into the freezing water to retrieve the cross, which is said to bring good luck to the person that reaches it first.

Some of the most charming features in Greece are its villages, especially those located on the beautiful mountainsides.

At Christmas time in Greece, the tall mountains are snowcapped, as are the lush evergreen trees that cover the countryside.

Most villages in Mainland Greece have picturesque stone-brick houses and narrow alleyways, which in the wintertime, resemble a small Santa's village. They are the ideal places to spend a white Christmas in Greece!

If you want to fit some skiing or other winter sports into your Christmas holiday in Greece, we recommend staying a while in one of the many winter resorts in the countryside. Most offer quaint accommodations that are located close to snow centers.