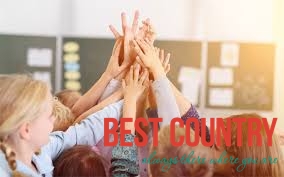 Schooling is free and compulsory in Finland between the ages of 7 and 16. Virtually no illiteracy exists. In addition to regular primary and secondary schools, Finland has an extensive adult education program consisting of folk high schools, folk academies, and workers’ institutes. The adult education schools are operated privately or by municipalities or provinces and receive state subsidies.

Education is state-supported in Finland. Schooling is required from ages 7 to 15 and is free. Instruction for all students is standard.

Virtually 100 percent of the people are literate. The University of Helsinki, founded in Turku in 1640 and transferred to Helsinki in 1828, is the principal university of the nation’s 20 institutions of higher education.

The Finnish institutes of higher learning, which include 13 universities and several colleges and teacher-training schools, had a total annual enrollment of some 175,000 students in 1991. The largest of the universities is the University of Helsinki.