Croatians are very proud of their traditions especially when it comes to their cuisine. Most of their food and drink traditions were of foreign influences, particularly Italian, Austrian, Hungarian and Turkish food. Croatian cuisine is very diverse. Aside form the nice places we can see there, their food is also to die for. 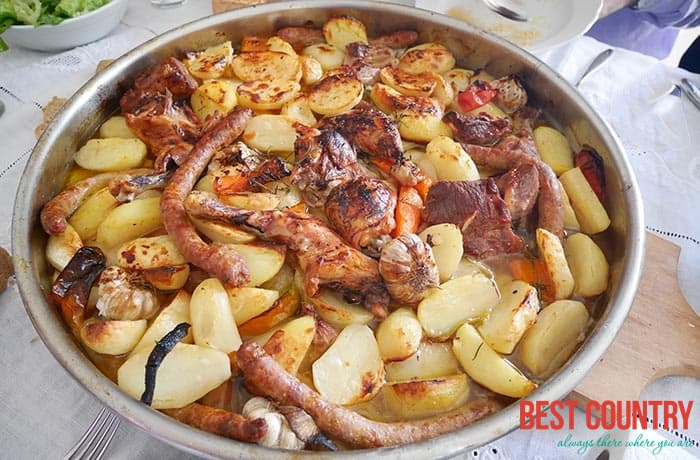 In regional areas, Zganci is their common breakfast meal, which consists of cheese, sour cream, yogurt and bacon.

They also feast in turkeys and ducks with mlinci or baked noodles, sarma or ground meat in sour cabbage leaves and krvavice or blood sausage with sauerkraut.

For dessert, they love having strukle, made from fresh cheese, apples, cherries, and other fruits, and palacinke, crepes filled with honey, walnuts or jam.

In restaurants, knedle and sljivama, a potato dumpling with plums is very popular. Yeast cakes layered with fresh cheese, apples are also famous, and walnuts, poppy seeds and raisins are also a must-try after dinner.

You should also try baked breads and cakes of Croatia. Examples of these are the Burek pillows which are cheese and meat-filled bread served in the form of pizza slices, or in plain sandwiches, and Buhtle, brick- shaped yeast rolls which is served with jam, cheese, or chocolate.

There are also other kinds of breads which include Pletenica roll dough with sesame seeds, Makovica, salted Slanac roll, cheesy Struke filled with cherries, apples, and walnuts, Kiflice or croissants, walnut- filled Orahnjaca/makovnjaca yeast bread and deep-fried Piroske puffy pastry which is served with cheese, ham, jam, or chocolate.

Most of these breads are perfectly served during breakfast. The tastes vary from sweet to salty, enough to satisfy one’s hunger and cravings. Fruit and nuts are added on these breads and cakes to make it more interesting and unique.

In northwestern regions, there are also café bars or what we call kafci which are often a hang-out of people at night. Pivo, a Croatian beer is famous too.

Among its famous brands are Karlovacko and Ozujsko. Kastelet, Grk. Also they have Posip, which are the crisp wines in the country. There is also Semion, a white bone-dried, and Teran red wine, and Loza is a grapebased spirit; travarica, an herbal brandy or vinjak, a cognac produced locally.

Croatia may be very small but it has a lot of things in store for all hungry souls out there…
When it comes to cuisine, Croatia will definitely tickle your appetite!