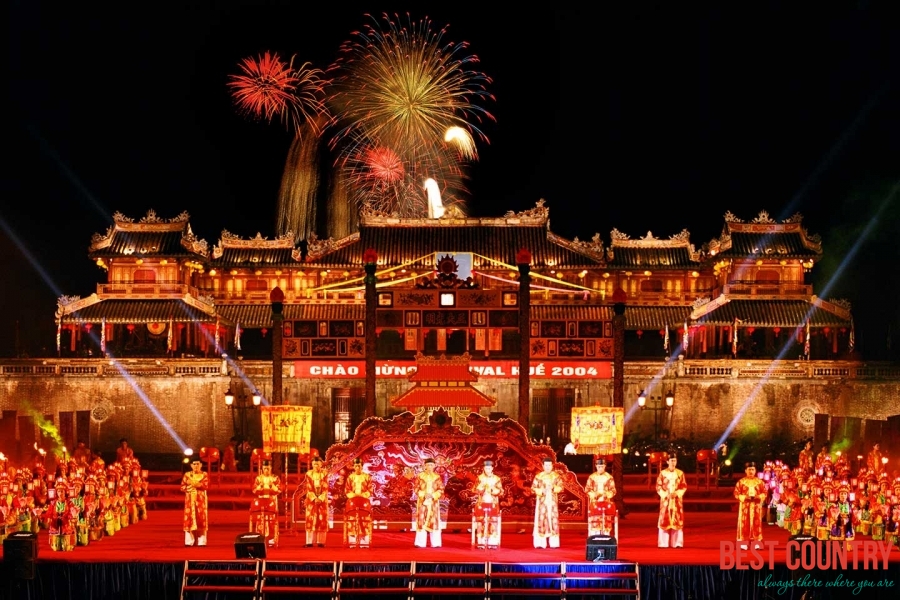 The festivals and events are calendared in Lunar month. Normally, a lunar month stay later than western month of around 30 days. For those who are deeply interested in cultural and spiritual events, choosing Vietnam tours and taking part in Vietnam festivals will be one of the best ways to enjoy Vietnam holiday and Vietnam travel.

January and February are the most interesting festival months in the year, in Vietnam. Plenty of the festivals and special events would be organized throughout Vietnam.

Tet - Vietnamese and Chinese Lunar New Year, is the most important Festival of Vietnamese people.

This scared Festival sometime between late January or early February (depend on Lunar Calendar ) and Tet has become so familiar to the Vietnamese that when Spring arrives, the Vietnamese, wherever they may be, are all thrilled and excited with the advent of Tet, and they feel an immense nostalgia, wishing to come back to their homeland for a family reunion and a taste of the particular flavours of the Vietnamese festivities..

Although officially a three-day affair, festivities may continue for a week or more with every effort made to indulge in eating, drinking, and enjoyable social activities. It is also a time for family reunions, and for paying respect to ancestors and the elders. Gifts of food are made to friends, neighbors and relatives in the days before Tet.

The Tet of the New Year is, above all, is an opportunity for the household genies to meet, those who have helped during the year, namely the Craft Creator, the Land Genie and the Kitchen God. Tet is also an opportunity to invite and welcome deceased ancestors back for a family reunion with their descendants to join the family's Tet celebrations.

Finally, Tet is a good opportunity for family members to meet. This custom has become sacred and secular and, therefore, no matter where they are or whatever the circumstances, family members find ways to come back to meet their loved ones, gather for a dinner of traditional foods like bánh chưng (a square cake made of sticky rice stuffed with beans and pork), măng (a soup of boiled bamboo shoots and flied pork) and xôi gấc (orange sticky rice).

This is followed by a visit to the local pagodas.

Everyone is in a rush to get a haircut, buy new clothes, spruce up their homes, visit friends, settle outstanding debts, and stock up on traditional Tet delicacies.

Stalls spring up all over town to sell mut (candied fruits and jams), traditional cakes, and fresh fruit and flowers.

Certain markets sell nothing but cone-shaped kumquat bushes. Others sell flowering peach trees, symbols of life and good fortune which people bring into their homes to celebrate the coming of spring.

As vendors pour into the City with peach trees strapped to their bicycles, the streets look like moving pink forests.

The "five-fruit tray" on the ancestral altar during the Tet Holidays symbolizes the admiration and gratitude of the Vietnamese to Heaven and Earth and their ancestors, and demonstrates their aspiration for a life of plenty.

Legend said abot of theories but in a simpler way, the five fruits represent the quintessence that Heaven and Earth bless humans. This is one of the general perceptions of life of the Vietnamese, which is "When taking fruit, you should think of the grower".

Coming to Vietnam during the season of the Tet festival, the visitor is engulfed in an ocean of colourful flowers.

Visiting flower shows, contemplating the buds and blooms, and purchasing blossoms represents one of the distinct Vietnamese cultural characteristics.

The peach ( in the North ) and the apricot blossoms (in the South) are symbols of the Vietnamese Tet.

The warm pink of the peach could very well match the dry cold of the North, but the hot South seems to be flourishing in the riot of the yellow of the apricot.

The mandarin is symbolic of good fortune and, therefore, people tend to choose the little plants laden with fruit, big and orange, and verdant leaves for a longer display.

The Giao Thua is the most sacred point of time, the passage from the old to the new year. It is popularly believed that in Heaven there are twelve Highnesses in charge of monitoring and controlling the affairs on earth, each of them taking charge of one year.

The giao thua is the moment of seeing off the old chieftain upon the conclusion of his term and welcoming in the new one upon his assumption of office. For this reason, every home makes offerings in the open air to pray for a good new year.

After the giao thua is the start of the new year with many customs and practices, amusements and entertainment, all of a distinct Vietnamese folk culture.

If you have an opportunity to visit Vietnam during the Tet Holidays and to welcome the Tet Festivities, together with the Vietnamese people, you will surely be profoundly impressed by the distinct traditional culture that is rich in national identity.

On the last day of the old year, the preparation of food to offer to the ancestors is of special significance.

Dishes to offer to the ancestors differ in the Northern, Central and Southern parts of the country, depending on their respective weather conditions at the time and on different local agricultural products available.

What is common in all regions of the country during Tet holidays are the varieties of soups, fried, boiled, or stewed dishes, meat, fish, vegetable...

The foods that the Vietnamese eat at Tet are varied and diverse What they have in common is that the people throughout the country all want to have the best and the most beautiful looking food on this occasion to offer their ancestors and to treat their friends and guests.

The Lim Festival, organized in Lim village located 18 km from Hanoi, where Quan Ho, the special folk songs performed. It takes place every year on 13th day of the 1st lunar month.

These are male and female farmers who sing different types of songs in the pagodas, on the hills, and in the boats. Besides this, visitors can come to the Lim Festival to enjoy the weaving competition of the Noi Due girls.

They weave and sing Quan Ho songs at the same time. Like other religious festivals, the Lim Festival goes through all the ritual stages, from the procession to the worshipping ceremony, and includes other activities.

The Lim Festival is a special cultural activity in the North. The festival celebrates the "Quan Ho" folk song which has become a part of the national culture and a typical folk song that is well loved in the Red River Delta region.

The Lim Festival is also celebrated with traditional temple games. In one game, teenage girls must mind a stranger's baby, chew pieces of sugar cane in order to create fuel with which to start and maintain a fire, cook rice, and prevent a frog from jumping out of a circle marked on the ground.

If the baby cries, the fire goes out or the frog escapes, the girl is disqualified.

This festival of lower Thai Duong Village in Huong Hai Commune of Huong Dien District is organized annually on the 12th day of the 1st lunar month in memory of the village tutelary genie Truong Quy Cong.

His alias is Truong Thieu, and he was a native of the North who came to the village to settle, teach the locals how to fish, and trade junks.

On the eve of the festival, the entire village begins making offerings. Both parts of the village, the upper and lower parts,worship to Truong Quy Cong.

Late at night, the "fish worshipping ceremony " occurs, where people pray for peace and the future abundance of fish.

Every three years, games representing sea fishing activities are organized, such as the "fish catching" game and "net-casting" game. After these games, people tend to go watch the rowing skiffs.

The "net-casting" performance is a form of entertainment that is characterized by rituals to commemorate the merits of the village tutelary genie.

If you go to Tay Ninh, you should visit Nui Ba, a beautiful mountain located in the middle of the Mekong Delta, 11km from downtown Tay Ninh.

Nui Ba (Ba Mountain) is often called Ms. Den Mountain. According to a legend, the mountain was named after a young woman called Denh, but who was referred to as Den.

She was the devout daughter of a guard officer of the Mien ethnic minority group. Den left her house to enter a monastery in the mountains. She became a nun due to family pressure to marry a guard officer's son from the Trang Bang Area.

She remained at the monastery until she died. After her death, the Nguyen Dynasty ordered that a mould of her be cast in black bronze in her honour as the Linh Son Thanh Mau ( Saint Linh Son).

During the spring until the afternoon of the 30th day of the 1st lunar month, and especially on the day of the full moon of the first month, tourists from Ho Chi Minh City and the provinces of the south pilgrimage to worship and sightsee.

Starting at the bottom of the mountain, tourists climb one half of the mountain to Saint Linh Son's communal house and then follow a path that leads to a pagoda.

This pagoda offers vegetarian meals. Tourists can eat as much as they want, but should donate some money to the pagoda; the amount of the donation depending on the budget of the tourist.