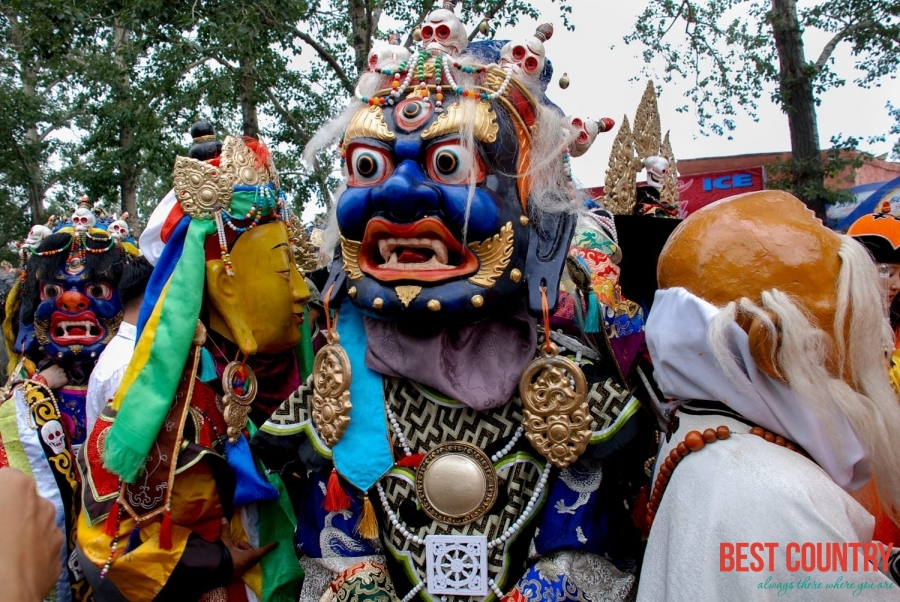 Naadam is a traditional type of festival in Mongolia. The festival is also locally termed "eriin gurvan naadam" - "the three games of men". The games are Mongolian wrestling, horse racing and archery and are held throughout the country during the midsummer holidays.

Naadam begins with an elaborate introduction ceremony featuring dancers, athletes, horse riders, and musicians. After the ceremony, the competitions begin. Women have started participating in the archery and girls in the horse-racing games, but not in Mongolian wrestling.

Naadam is the most widely watched festival among Mongols, and is believed to have existed for centuries in one fashion or another.

Naadam has its origin in the activities, such as military parades and sporting competitions such as archery, horse riding and wrestling, that followed the celebration of various occasions.

Now it formally commemorates the 1921 revolution when Mongolia declared itself a free country. Another popular Naadam activity is the playing of games using shagai, sheep anklebones that serve as game pieces and tokens of both divination and friendship. In the larger Nadaam festivals, tournaments may take place in a separate venue.

Mongolian Lunar New Year, commonly known as Tsagaan Sar is the first day of the year according to the Mongolian lunar calendar. Tsagaan Sar is one of the most important Mongol holidays. Around the New Year families burn candles at the altar symbolising enlightenment.

Mongols also visit friends and family on this day and exchange gifts. Many people will be dressed in full garment of national Mongol costumes. During the greeting ceremony, family members hold long pieces of colored cloth called khadag.

After the ceremony, the extended family eats rice with curds, dairy products and buuz and drinks airag, and exchanges gifts. The day before Tsagaan Sar is called Bituun, the name of the lunar phase of dark moon.

On the Bituun day, people thoroughly clean around home, herders also clean the livestock barns and shades, to meet the New Year fresh.

In the evening, families gather together--immediate family usually. Traditionally, Mongolians settle all issues and repay all debts from the old year by this day.

Traditional food for the festival includes dairy products, rice with curds (tsagaa-цагаа) or rice with raisin (berees-бэрээс), a pyramid of traditional cookies erected on a large dish in a special fashion symbolising Mount Sumeru or Shambhala realm, a grilled side of sheep and minced beef or minced mutton steamed inside pastry, a dish known as buuz, horse meat and traditional cookies.

Tsagaan Sar is a lavish feast, requiring preparation days in advance, as the women make large quantities of buuz and freeze them to save for the holiday.

Travel south to the Gobi Desert to attend the renowned "Thousand Camel Festival" organized by a local non-governmental organization working to protect and perverse the Bactrain camel population, which has been steadily declining over the past twelve years.

This extraodinary festival allows travelers a rare opportunity to interact with and learn first-hand about these amazing animals and the camel herders' nomadic lifestyle.

Highlights of the festival include camel races, performances by traditional Mongolian musicians and dancers, and visits to significant paleontological and cultural sites of the Gobi. Attend the camel races at the Thousand Camel Festival, a unique opportunity to witness the speed and agility of Bactrian camels.

In the eagle festival, Kazakh hunters (Burkitshi) celebrate their heritage and compete to catch small animals such as foxes and hares with specially trained golden eagles, showing off the skills both of the birds and their trainers.

Prizes are awarded for speed, agility and accuracy, as well as for the best traditional Kazakh dress, and more.