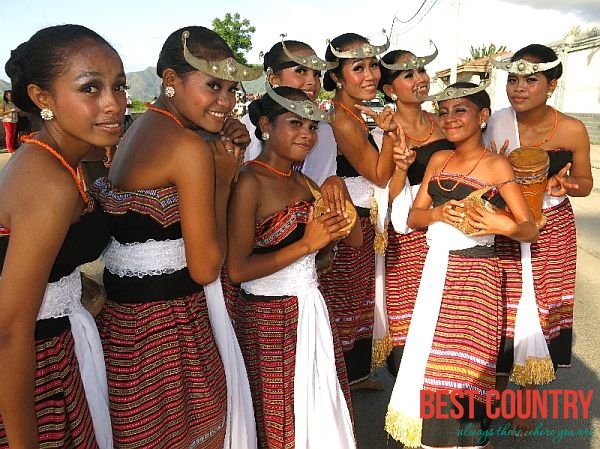 Timor island is before 1976 splitted into 2, the east part was colonized by Portugal, and on the west part the area of Indonesia, yet after 1998 a movement of east Timor independence supported by Australia and Portugal succeeded in giving suppression to Indonesian government to organize a memorandum of opinion, under the watch of UN which brought east Timor ( Timor l'Este ) into their independency.

Historically Timorisland is part of east Nusa Tenggara archipelago with sea relation between Makassar and even as far as Northern Territory of Australia.

The folk tales of local people on the areas gives the indication of the relation.

There are 6 main groups of people living on Timor island based on mainly their language dialect, area, and especially the Atoni people is their Melanesian marked characteristics, yet smaller body size living on the larger part of Timor island.

The Helon people living on south west of Kupang city, and Roti island.

The kemak people living also on both countries showing the same physical characteristics with the Helon, a mixed characteristic of Melanesian and Malay, yet their size of body is the highest among all people on Timor island.

The Marae or Buna people living on the whole area of Timor has the same characteristics with Helon people.

The Kupang people living on the city of Kupang is mixed people from all over Timor, other areas of Indonesia, China and Arab.

The pattern of their marriage institutions not much different from other ethnics of Indonesia.

An ideal marriage is that a son be married with the daughter of mother's brother. But on the fact a youth is free to choose his partner. Same as other ethnic that marriage dowry is to expensive.

To avoid this tradition normally parent would suggest their son to choose partner among relatives who was ever a relation on marriage at the previous generation.

In this case marriage dowry is small or might not necessary, and is considered strengthen the relation. If between the family or clan of man and woman do not have relation based on previous marriage, the dowry will be very high.

In some cases last installment normally refused by parent of the woman in order to still retain her parent's clan.

The type of dowry are gold or silver plate and a number of cattles. in return the family of the woman give blankets. This is one step during the engagement. Second step is deciding the marriage or wedding ceremony with wedding special organization.

Legal wedding is normally done at the church as most of the people on Timor island follow Catholicism.

During Wedding ceremony again a gold or silver plate will be given to the parent of the woman, and woman parent and family will give as a return blankets and pig.

Their wedding ceremony is not less festive then any other ethnics of Indonesia, as they consider wedding for their son or daughter is one of the most important event within their tradition and life.