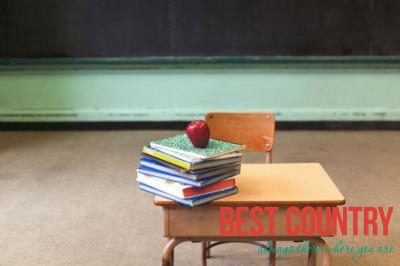 Over 90% of all school buildings were severely damaged or destroyed by the Indonesian military and in the exodus of Indonesians out of East Timor, the nation lost 20% of its primary school teachers and 80% of secondary teachers, most of whom are not expected to return.

UNICEF and other international aid organizations responded fairly quickly, however, reestablishing classes for 420 of the country's 800 primary schools by December 1999 plus an additional 273 schools by April 2000.

In 2001, East Timor appointed its first minister of education. At the beginning of the 2001 academic year, there were about 240,000 primary and secondary school students enrolled in classes with over 700 primary schools, 100 junior secondary schools, 40 preschools, and 10 technical colleges. About 6,000 teachers were employed.

The National University of East Timor (Universidade Nacional Timor Lorosae—UNTL) opened for classes on 27 November 2000 and had about 5,000 students in attendance in 2003.

There are five faculties at the university: agriculture, political science, economics, education and teacher training, and engineering.

All new students follow a course including human rights, ethics, philosophy of science, and Timorese history.

In 2000, the language of instruction was Indonesian, but this has been a subject of debate.

Many are encouraging a switch to the national language of Tetum as a primary language with Portuguese and English as secondary languages.

The new minister of education will need to address the issues of continued repairs and rebuilding of schools, providing adequate training for teachers, and establishing a standardized curriculum relevant to East Timorese students.