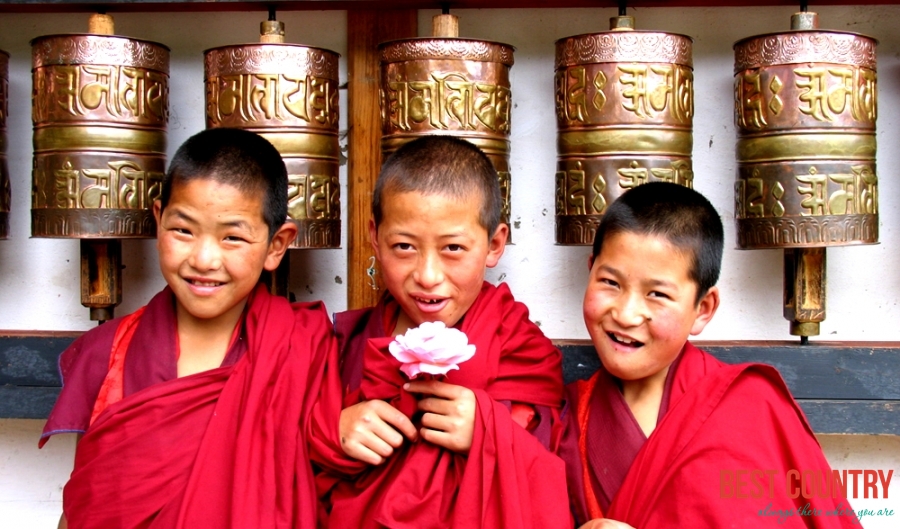 The Kingdom of Bhutan is the only country in the world where Buddhism is the official religion and is endorsed by the government. To ensure the perpetuation of Buddhism, normally, one son from each family attends monastic school.

The Buddhist faith plays a fundamental role in the cultural, ethical and sociological development of Bhutan and its people.

It permeates all strands of secular life, bringing with it a reverence for the land and its well-being.

Annual festivals (Tshechu and Dromchoes) are spiritual occasions in each district and are dedicated to either Guru Rimpoche or other deities.

Mahayana Buddhism was the state religion, and Buddhists comprised about 70% of the population in the early 1990s.

Although originating from Tibetan Buddhism, Bhutanese Buddhism differs significantly in its rituals, liturgy, and monastic organization.

The government through annual subsidies to monasteries, shrines, monks, and nuns has long supported the state religion financially.

Throughout Bhutan, stupas or Chortens line the roadside commemorating a place where Guru Rimpoche or another Shabdrung may have stopped to meditate.

Prayers flags are even more common as fluttering on long poles they maintain constant communication with the heavens.

The majority of Bhutan's Buddhists are followers of the Drukpa sub-sect of the Kargyupa School, one of the four major schools of Tibetan Buddhism.

The Kargyupa literally means a concept tying the realization of emptiness to freedom from reincarnation.

This school is a combination of the Theravada (monastic), Mahayana (messianic), and Tantrayana (apocalyptic or esoteric techniques of meditation and a repertoire of sacred icons, phrases, gestures, and rituals that easily lend themselves to practical interpretation) forms of Buddhism.

Tibetan Buddhism holds that salvation can be achieved through the intercession of compassionate bodhisattvas (enlightened ones or deities which occupy the center of a richly polytheistic universe of subordinate deities) who have delayed their own entry into a state of nibbana, or nirvana, enlightenment and selfless bliss, to save others.

Emphasis is put on the doctrine of the cosmic Buddha, of whom the historical Buddha - Siddhartha Gautama (563 BC- 483 B.C) is only one of the many manifestations.

Monasteries and convents are common throughout Bhutan. Both monks and nuns keep their heads shaved and wear distinguishing maroon robes.

To bring Buddhism to the people, numerous symbols and structures are employed. Religious monuments, prayer walls, prayer flags, and sacred mantras carved in stone hillsides can still be found all over Bhutan.

Among the religious monuments are Chorten, the Bhutanese version of the Indian stupas.

They range from simple rectangular "house" Chorten to complex edifices with ornate steps, doors, domes, and spires. Some are decorated with the Buddha's eyes that see in all directions simultaneously.

The earth, brick, or stone structures commemorate deceased kings, Buddhist saints, venerable monks, and other notables, and sometimes serve as reliquaries. Prayer walls are made of laid or piled stone and inscribed with Tantric prayers.

Prayers printed with woodblocks on cloth are made into tall, narrow, colourful prayer flags, which are then mounted on long poles and placed both at holy sites and at dangerous locations to ward off demons and to benefit the spirits of the dead.

To help propagate the faith, itinerant monks travel from village to village carrying portable shrines with many small doors, which open to reveal statues and images of the Buddha, bodhisattavas, and notable lamas.

The royal family alternately practices the Nyingmapa and Kargyupa forms of Buddhism.

The minority religion of Bhutan is Hinduism, whose followers - those of Nepalese origin - officially constitute 28% of the population.

Major Hindu festivals are recognized as national holidays, and even the royal family participates in them. There is a small percentage of the population, about 5%, who practice Islam.

Although foreign religious personnel are permitted to work in Bhutan as educators, the government does not let them proselytise.

Christians, both Catholics and Protestants, are present in very small numbers throughout the country.

There was reportedly only one building used for Christian worship in the south of the country, the only location where the concentration of Christians was sufficiently large to sustain a church building. Elsewhere, families and individuals practiced their religion at home.

Approximately one-quarter to one-third of the population, ethnic Nepalese who live mainly in the south, practices Hinduism. The Shaivite, Vaishnavite, Shakta, Ghanapath, Paurinic, and Vedic schools are represented among Hindus.

A very old form of worship, which was followed before Buddhism prevailed, is Bon, a kind of an animistic and shamanistic faith.

It is a Tibetan word meaning invocation or recitation and has priests - bonpo - who perform exorcisms, burial rites, and divinations to tame threatening demons and to understand the wishes of the gods, which revolves around the worship of nature.

The arrival of this faith to the country predated that of Buddhism. Bon priests still can be found in the country, but very few citizens adhere to this faith.

Bon rituals sometimes are included in the observance of Buddhist festivals.

Bon has in a way conversely influenced popular Buddhism and has established a canon of teachings, which continue to be practiced in present day Bhutan.