Places to Visit in Thimphu

Thimphu (alt. 2400m/7875ft) - The capital town of Bhutan and the centre of government, religion and commerce, Thimphu is a unique city with unusual mixture of modern development alongside ancient traditions.

Although not what one expects from a capital city, Thimphu is still a fitting and lively place.

Places of interest in and around Thimphu

This stupa was built in 1974 in the memory of Bhutan's third King, His Late Majesty, King Jigme Dorji Wangchuk, who is popularly regarded as Father of modern Bhutan. The paintings and statues inside the monument provide a deep insight into Buddhist philosophy. 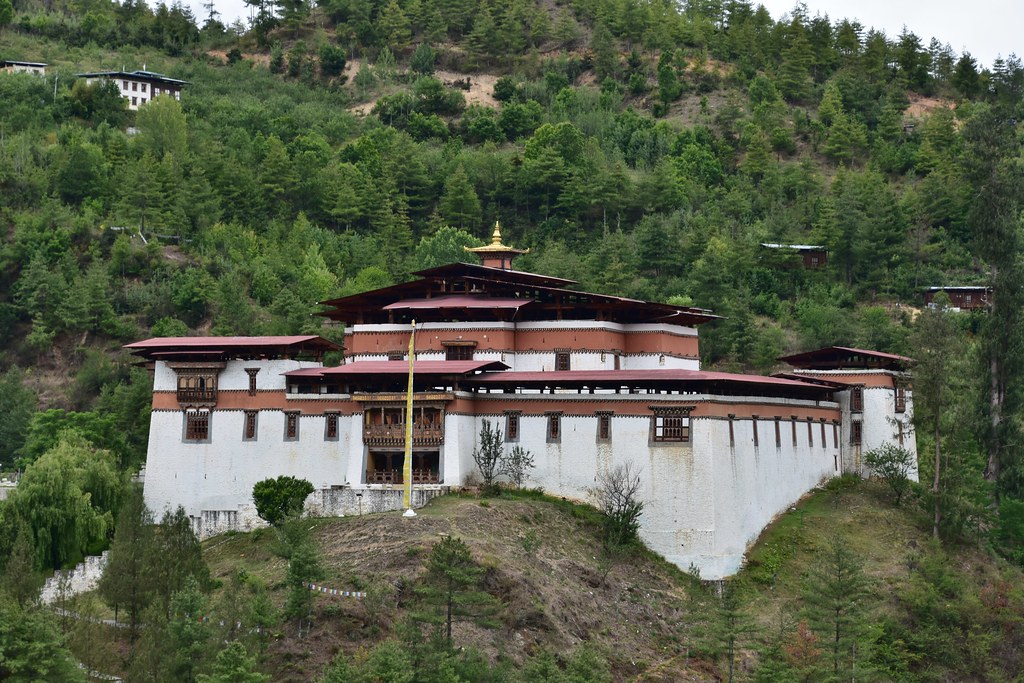 This dzong, built in 1627 by Shabdrung Ngawang Namgyal, stands on a low ridge 8 km down the valley from Thimphu. The Institute for Language and Cultural Studies is located here. The most noteworthy artistic feature of this dzong is the series of over 300 finely worked slate carvings behind the prayer wheels in the courtyard.

The history of Bhutan lies imprinted in archaic texts, which are preserved at the National Library. Besides thousands of manuscripts and ancient texts, the library also has modern academic books and printing blocks for prayer flags.

Commonly known as Arts & Crafts School or Painting School, the Institute offers a six-year course on the 13 traditional arts and crafts of Bhutan. On a visit, one can see students learning the various skills taught at the school.

In Bhutan, equal emphasis is given to both allopathic and traditional medicines. The rich herbal medicines made up from medicinal plants abundant in the Kingdom are prepared and dispensed here. The Institute is also a training school for traditional medicine practitioners. The complex is closed to visitors due to considerations of hygiene, but one can still walk around and view it from outside.

It is dedicated to connect people to the Bhutanese rural past through exhibits, demonstrations, educational programmes and documentation of rural life. The principal exhibit in the museum is a restored three storey traditional rammed mud and timber house, which dates back to the mid 19th century.

The design and form of house is that of an average household in the Wang area during that era. The age of structure demonstrates the durability and performance of the building materials.

From ground to top floor, household objects, typical domestic tools and equipments that would have been used by a family during that period are put on display. The museum is also developing some of the native trees and plants that were used for various domestic purposes in the rural households.

With the opening of Textile Museum, under the patronage of Her Majesty the Queen Ashi Sangay Choden, Bhutanese textile have reached new heights as one of the most visible distinct art form.

The crowns of Bhutan's Kings, namzas (dresses), the first version of Royal Crown and other accessories used by members of Royal family can be found in the museum. The goal of the museum is to gradually become a center for textile studies that will carry out documentation, research and studies on Bhutanese textiles.

Also know as "fortress of the glorious religion", it was initially built in 1641 and later rebuilt in its present form by King Jigme Dorji Wangchuk in 1965.

The Dzong houses, main secretariat building which houses the throne room of His Majesty, the King of Bhutan.

The National Assembly Hall is housed in a modern building on the other side of the river from the Dzong. During the warmer summer months, the monk body headed by His Holiness, the Je Khenpo, makes its home in the Dzong.

A wide assortment of colorful, hand woven textiles and other craft products is available for purchase at the government-run Handicrafts Emporium and many smaller crafts shops around the town.

Every Saturday and Sunday most of Thimphu's scant population and many valley dwellers congregate on the banks of the river where weekend market is held. It is an interesting place to visit and provides opportunity to mingle with the local people.

It is a fortress like temple and monastic school perched on a ridge above Thimphu, south of Motithang. The temple was established in 12th century on a site chosen by Lama Phajo Drugom Shigpo, who came from Tibet.

The central statue here is Chenrezig in a manifestation with 11 heads. From temple courtyard, there is fascinating view of Thimphu valley.

Organised on Tuesday and Wednesday in Centenary Farmer’s market, under patronage of Department of cottage & small industry and in collaboration with the department of culture, tourism council and the department of agriculture marketing and cooperatives, this market offers genuine Bhutanese arts & crafts thus contributing in promotion, protection and preservation of traditional arts.

Junghi Paper factory comprises of two enterprises ; the unit in Thimphu produces traditional handmade paper from natural plants mainly from ‘Daphne’ plant species which is insect-resistant. The other unit in Jimina, 22 km from the centre Thimphu town, recycles waster papers.

The traditional handmade papers are widely used for religious scripts, packing materials, hand-carry bags, lampshades, envelopes, calendars . The paper looks a lot like Japanese washi, and in fact a lot of Bhutanese paper is exported to Japan also.

The present structure was built in 1960s and although lacking the charm of many of the older temples, Zangthoo pelri still possesses some impressive murals and art treasures and is worthy of a visit. The site of the temple was a former battle ground, and the temple was constructed there in order to pacify energies.

Located at a short drive from Thimphu city centre, visitors can get a good overview of the Thimphu valley from the Buddha point (Kuensel Phodrang). You can pay your obeisance and offer prayers to the Buddha, the largest statue in the country and then walk around and take a glimpse of the valley.

This monastery was founded by Lama Gyalwa Lhanangpa in the 12th century and the present building was built in the 15th century by the "Divine Madman", Lama Drukpa Kunley. In 1616 Shabdrung Ngawang Namgyal visited Tango and meditated in a cave near the monastery.

His meditation helped ensure the defeat of an invading Tibetan army. The head Lama, a descendent of Lama Drukpa Kunley presented the goemba to Shabdrung, who carved a sandalwood statue of Chenrezig which he installed in the monastery.

The picturesque three-storey tower and several surrounding buildings were built in the 18th century by the eighth Desi, Druk Rabgye and Shabdrung Jigme Chhogyel added the golden roof in the 19th century.

Situated north of Thimphu, one way it takes about 30 minutes drive and one hour walk through shaded rhododendron forests to reach the monastery.

This monastery was built by Shabdrung Ngawang Namgyal in 1620. A silver chorten inside the monastery holds the ashes of Shabdrung's father. The goemba is situated about half an hour walk from Dodena (alt. 2,600m).

The trail commences by crossing a traditional wooden bridge that spans the Thimphu Chhu, then climbs steeply to the monastery. Being the place where the Shabdrung spent many years in meditation,

Cheri today has numerous hermitages and small temples located on its slopes, commanding spectacular views. The one way walk to the monastery is approx 4.5 km, taking about 2 hours.

It is a 5 km uphill walk from Motithang. The monastery was built in 15th century by Shagcha Rinchen who introduced the Drukpa Kagyupa school in Bhutan in the 13th century. It was one time one of the richest monasteries in the country.

It is an interesting three to four hours round trip walk around Dochula pass, offering fascinating view of Bhutan Himalayas.

From 108 chortens and mani wall at Dochula pass, the road ascends gradually into white, red and pink rhododendron forests for about one and a half hour with some steep sections before branching left to Lungchuzekha Goemba.The highlight of this excursion is beautiful forest, spectacular mountain views and monastery.

The Takin is the national animal of Bhutan, and looks like a cross between a cow and a goat. Legend has it that the animal was created by the great Buddhist yogi, Drupa Kunley, and it can be found only in Bhutan and nearby areas.

Taxonomists place the animal in a category of its own as it is not similar enough to any other animal to fit established categories.

Located on lush hillside about 10km from the city, the gardens offer a peaceful and relaxing environment to spend a few hours. Botanists will find the wide selection of indigenous trees and plants of interest.

Located on the banks of the river (near the city stadium), this 5.6 acres of parkland offer a pleasant and relaxing environment to stroll or to sit and watch the river flow by.

This sacred lhakhang is about 1 km from the main town, built on a cliff, just like the Tiger’s Nest in Paro.

The visit to the temples provides an opportunity to feel and see the great work of ancient Buddhist legends. It is believed that there use to a lake below the lhakhang but now one can found only a marshy area.