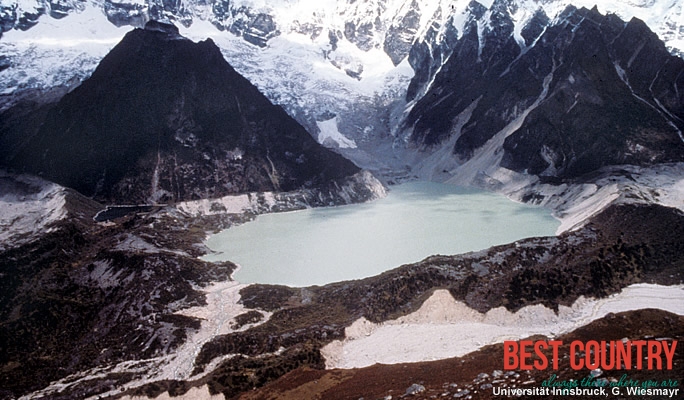 Bhutan has four major river systems flowing swiftly out of the Himalayas that are regularly fed by glaciers in northern Bhutan.

They flow towards Duars in the south and join Brahmaputra River in India.

Brahmputra then flows through Bangladesh and is known as Jamuna there.

Jamuna of Bangladesh joins Padma river of Bangladesh, more popularly known as Ganges in India, and then flows into the Bay of Bengal.

The glaciers are fed by snowfalls during winter that melt slowly in summer. They cover about 10 percent of the total surface area of Bhutan and are important renewable source of fresh water to Bhutan and downriver areas each year.

Melting of glaciers along with heavy rainfall in monsoons sometimes result in flooding too. For the past few decades, glacial lakes have been rapidly forming on the surface of the debris-covered glaciers in this region.

The river systems of Bhutan are:

Drangme Chhu is the largest river system of Bhutan. It flows to the southwest and rises in the Indian state of Arunachal Pradesh It has three major branches that form Drangme Chhu basin together.

The Drangme Chhu basin spreads over most of eastern Bhutan, flowing through the Tongsa and Bumthang valleys, and is joined by eight tributaries in the Duars. In the Duars, it is known as the Manas Chhu.

Mo Chhu and Pho Chhu rising in northwestern Bhutan and fed by snow from the Great Himalayan Range, flow southwards towards Punakha, where they join to merge Puna Tsang Chhu.

The 320 km long Puna Tsang Chhu flows to the south and enter West Bengal of India.

It flows through Ha, Paro, and Thimphu valleys and then through Duars, where it is known as the Raigye Chhu. It flows into West Bengal and has tributaries that are 370 km long.

It is the smallest river system and is known as the Amo Chhu towards north. This river system rises in Tibet, flows out of it into the Chumbi Valley, flows swiftly through western Bhutan, broadens near Phuntsholing and then flows into India.