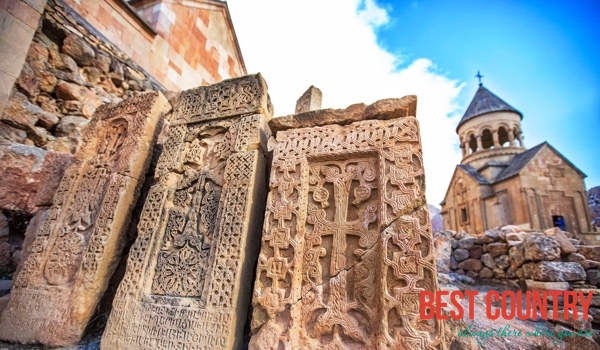 Through the centuries Armenian culture has developed in a contemporary, unusual and thriving way. Many aspects of the Armenian culture are based on the music,dance, literature, and geographical placement of the people.

The culture of Armenia is distinctly different and yet strikingly similar to the neighboring nations of Georgia, Russia, and Iran as well as Mediterranean countries like Italy, and Greece.

Armenian culture has heavy influences of both its Eastern neighbors, along with an inherent influence from Europe in the West.

Culture in Armenia has many facets, the most important are:

Dance - the heritage of Armenian dance has been one of the oldest, richest and most varied in the Near East.

Literature - Literature started in Armenia around 400 A.D. The bulk of it were created by Moses of Khorene. The 19th century, writer Mikael Nalbandian created a new Armenian literary individuality, his poem was the inspiration for the Armenian national anthem, Mer Hayrenik.

Cuisine - Armenian cuisine is a combination of different tastes and aromas. Intimately related to eastern and Mediterranean culinary art, various spices, vegetables, fish, and fruits combine to present unique dishes. Armenia is also famous for its wine and brandy, in particular, Armenian cognac.

Sports - always popular in Armenia, the ancient Olympics often had Armenian aristocracy as contestants. The most popular sports are: soccer, tennis, basketball, wrestling, boxing and weight-lifting.

Woodcraft and Smithies - have always been a source of artistic recognition for the Armenian nation.

Armenia's culture has seen a lot of exchange and change through the centuries yet its core values depending upon the existence of large joint families.

Armenian culture is hence a perfect amalgamation of the best achievements of the past with the high hopes of future.