Yerevan is the capital of Armenia

Yerevan is the capital and largest city of Armenia and one of the world's oldest continuously-inhabited cities. 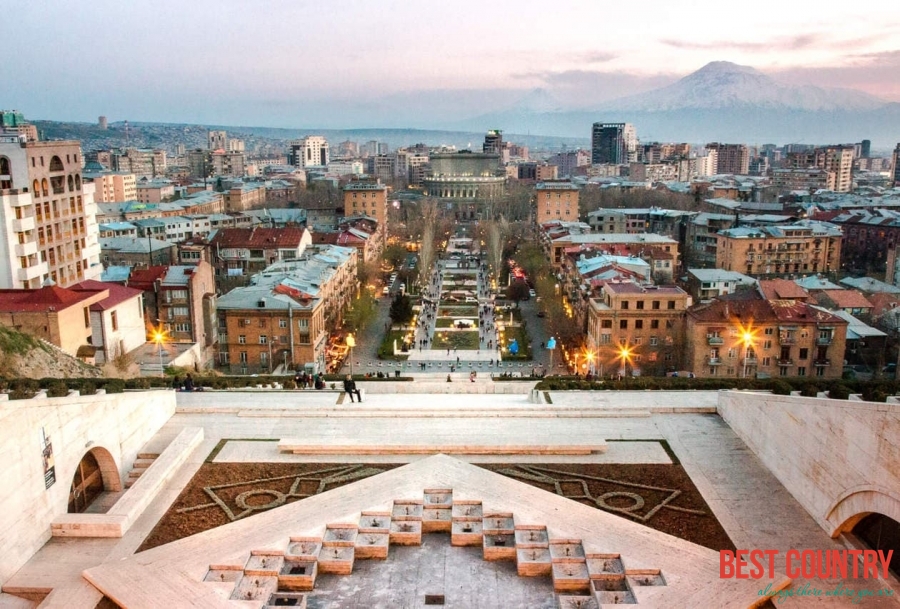 Tourism in Armenia is developing year by year and the capital city of Yerevan is one of the major tourist destinations.

Erebuni Fortress – the excavations, recreations and museum of the nearly 3,000 year old fortress that established Yerevan. Fairly well (and maybe the best) preserved fortress of Urartian Period in Armenia.

Republic Square - The early buildings (the Houses of Government, the Ministry of Communications, and the Marriott Hotel) are fine example of Neo-Classical architecture with Armenian hints. The buildings from later period (the Foreign Ministry, and Art Gallery) are Modernist imitations of previous ones.

Northern Avenue - impossible to miss, this pedestrian avenue was just opened in 2008 connecting Opera with Republic Square, the two hubs of central Yerevan. It's a Post-Modern response to post-WWII Soviet Yerevan architecture. It is emerging as the shopping district, together with Sayat-Nova ave., Terian st., Tumanian st., and Abovian st.

Abovian street - It's home to very few remaining Belle Époque period structures of Republican Armenia. Some gems of Art Nouveau, early Modern (constructivist and the like), and Moorish Revival style can be found in the backyards of Abovian, Nalbandian, and Hanrapetutian streets.

The Opera – It's the 'soft' center of the city. It is topped by the magnificent building of the Opera House. Again (unfortunately) the building is not finished.

Freedom (or Theatrical) Square is part of The Opera. North side of the square is the Opera House, followed by a park full of open air cafés on the West, from South it borders the Northern Avenue, and on the East the square slowly transforms into park with Swan Lake. The Swan Lake park ends with the controversial statue of the composer Arno Babajanyan. The Swan Lake park usually hosts various open air art exhibitions.

Cascades, Sculpture Park and Cafesjian Museum – Sculptures from Botero and other artists of international fame decorate the Park. The park itself is part of Cafesjian Museum - the Armenian version of Guggenheim. The main part of the museum is in the Cascades - an Art Deco version of the Hanging Gardens of Babylon stretching nearly the height of the Empire State Building. It's a massive white stairway up a hillside of central Yerevan, decorated with green stretches, fountains and waterfalls. Higher level of the Cascades give a spectacular view of Mount Ararat and panorama of central Yerevan with it's hilariously multi-colour roofs.

Matenadaran– Houses the worlds largest collection of Armenian illuminated manuscripts, and one of the largest such collections of any kind in the world.

Blue Mosque - is an 18th century Shia Islamic Mosque, one of the extreme few surviving structures of once (before Soviet secularisation) prospering Muslim Community of Yerevan.

Children's Park - This is yet another beautiful remnant of Soviet urban planning in Yerevan. The park, opened in 1937, is situated in a gorgeous canyon of Hrazdan river and features a Children's railway.
The Singing Fountains - From early Spring to late Autumn each evening there is a fountain and light show in front of the Art Gallery at the Republic square. The program includes some classical favorites, as well as contemporary Jazz, Rock and Pop (US or Russian)

Saryan Museum If you are a lover of bright colours and enjoy Expressionist Art then House Museum of Martiros Saryan is a place for you.

Cafesjian Museum of Modern Art is a museum of modern art, house to the collection of Gerard Cafesjian.

The National Art Gallery - Located at Republic Square in the same building as the National History Museum.

The City Museum of Yerevan - presents all periods of the life in Yerevan starting from paleolithic settlements (50000 years) to modern days. Ancient maps and the pictures of the lost city, pre-Soviet Erivan, are of special interest.

Museum of Woodwork houses some artifacts of Armenian historical wood carving culture (doors, furniture and the like) as well as wood-based sculptures of modern day artists.

The location of Yerevan itself, inspires foreigners to visit the city in order to enjoy the view of the biblical mount of Ararat.

There are plenty of historical sites, churches and citadels in areas and regions surrounding the city of Yerevan, such as the (Garni Temple, Zvartnots Cathedral, and Khor Virap, etc.).