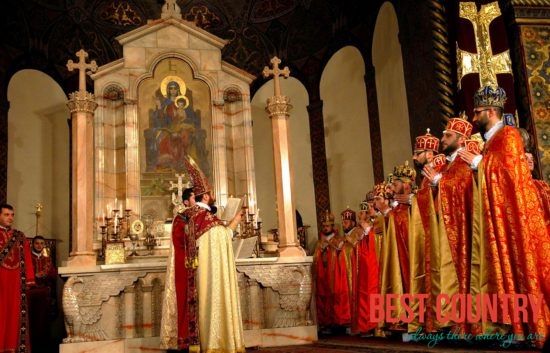 Up to 97% of Armenians follow Christianity, which has existed in Armenia for over 1,700 years. Armenia has its own church, the Armenian Apostolic Church, which most Armenians follow. Christianity has a strong influence in the country, but there is a small presence of other religions too.

The country has an area of 11,500 square miles (30,000 km2) and a population of 3 million. Approximately 98 percent of the population is ethnic Armenian.

As a result of Soviet-era policies, the number of active religious practitioners is relatively low, but the link between Armenian ethnicity and the Armenian Church is strong.

According to the U.S. State Department, International Religious Freedom Report 2005, an estimated 90 percent of citizens nominally belong to the Armenian Church, an independent Eastern Christian denomination with its spiritual center at the Etchmiadzin cathedral and monastery. The head of the church is Catholicos Garegin (Karekin) II.

There are small communities of other religious groups. There was no reliable census data on religious minorities, and estimates from congregants varied significantly: Catholic, both Roman and Mekhitarist (Armenian Uniate) (180,000); Yazidi, an ethnically Kurdish cultural group whose religion includes elements derived from Zoroastrianism, Islam, and animism (40,000); unspecified "charismatic" Christian (22,700); Jehovah's Witnesses (11,500);

Yezidis are concentrated primarily in agricultural areas around Mount Aragats, northwest of the capital Yerevan. Armenian Catholics live mainly in the northern region, while most Jews, Mormons, Baha'is, and Orthodox Christians reside in Yerevan.

In Yerevan there is also a small community of Muslims, including Kurds, Iranians, and temporary residents from the Middle East.

Foreign missionary groups are active in the country.

The Constitution as amended in 2005 provides for freedom of religion and the right to practice, choose, or change religious belief.

The law places some restrictions on the religious freedom of religious groups other than the Armenian Church.

The Law on Freedom of Conscience establishes the separation of church and state but grants the Armenian Church official status as the national church.

Christianity was first introduced by the apostles Bartholomew and Thaddeus in the 1st century AD. Armenia became the first country to establish Christianity as its state religion when, in an event traditionally dated to 301 AD, St. Gregory the Illuminator convinced Tiridates III, the king of Armenia, to convert to Christianity. Before this, the dominant religion was Zoroastrianism and to a smaller degree paganism.

The Armenian Catholic Church (an Eastern Catholic church in full communion with Rome) formed a diocese within Armenia in 1991, after the collapse of the Soviet Union. It claimed about 200,000 adherents in Armenia in 2000 and nearly 500,000 in 2008.

The Bahá'í Faith in Armenia begins with some involvements in the banishments and execution of the Báb, the Founder of the Bábí Faith, viewed by Bahá'ís as a precursor religion.

The same year of the execution of the Báb the religion was introduced into Armenia.[5] During the period of Soviet policy of religious oppression, the Bahá'ís in Armenia lost contact with the Bahá'ís elsewhere.

However in 1963 communities were identified[7] in Yerevan and Artez. Following Perestroika the first Bahá'í Local Spiritual Assemblies of Armenia form in 1991 and Armenian Bahá'ís elected their first National Spiritual Assembly in 1995.

Azeris and Kurds living in Armenia traditionally practiced Islam, but most Azeris have fled the country due to the Nagorno-Karabakh War.

Approximately 1,000 Muslims live in Yerevan, and one 18th century Mosque remains open for Friday prayers.Islam in Armenia consists mostly of Azeris and Muslim Kurds. In 2009, the Pew Research Center estimated that less than 0.1% of the population, or about 1,000 people, were Muslims.

Armenians did not convert to Islam in large numbers. During the Arabic conquest, Islam came to the Armenians however, almost all Armenians never converted to Islam, since Christians were not required to convert by Muslim law, and the absence of heavy taxation also hindered this. The story was similar in the Ottoman Empire.

During 1988-1991 the overwhelming majority of Muslim population consisting of Azeris and Muslim Kurds fled the country as a result of the Nagorno-Karabakh War and the ongoing conflict between Armenia and Azerbaijan.

There is also a significant community of Yazidi Kurds (50-70,000 people), who were not affected by this conflict. Since the early 1990s, Armenia has also attracted diverse esoteric and sectarian groups.

Jews have a historic presence in Armenia. During the Soviet years, Armenia was considered to be one of the most tolerant republics for Jews in the Soviet Union. Currently there are an estimated 750 Jews in the country, a remnant of a once larger community.

Most left Armenia for Israel after the collapse of the Soviet Union because of inadequate services. Still, despite the small numbers, a high intermarriage rate and relative isolation, a lot of enthusiasm exists to help the community meet its needs.

There is a strong and growing ethnic (Reconstructionistic) Neopagan movement in Armenia.

Adherents call themselves Hetans or Hetanos (հեթանոս). The movement traces its origins in the work of the early 20th century political philosopher and revolutionary Garegin Nzhdeh and his doctrine of Tseghakron.

In 1991 it was institutionalised by the armenologist Slak Kakosyan under the umbrella organisation called Armenian Hetan Alliance.

The doctrine and mythology of the new Pagan movement is codified into a book, the Ukhtagirk, written by Kakosyan himself.

The association claims roughly 3,000 members, even though a 2005 survey puts the number of unaffiliated Armenian Hetans at 32% of the population (the remaining being constituted by a 37% of Christians and a 24% of non-religious).

They have re-consecrated the Temple of Garni (a Hellenistic-style temple rebuilt in 1975), originally a temple to Mihr, to Vahagn, and they use it for regular worship and as a center of activity.

The movement is strongly associated to Armenian nationalism, since it finds its foundations in the desire of Armenians to recover their pure ancestral cultural identity.[13] It finds some support from nationalist political parties of Armenia, particularly the Armenian Republican Party and the Union of Armenian Aryans.

Ashot Navasardyan, the founder of the Republican Party of Armenia, which is also the currently leading party of the country, was a Pagan himself, as many other members of the party are.

There are small communities of Protestant Armenians of various denominations, as missionaries converted a number of Armenians.

The Jehovah's Witnesses have estimated their membership at 11,500. The Church of Jesus Christ of Latter-day Saints claims approximately 3,000 adherents in Armenia at the end of 2011 .

The Roman Catholic Church claims about 100,000 adherents in Armenia.

About 2% of Armenia's population, mostly ethnic Kurds living in the western part of the country, follow the ancient Yazidi religion.

Many Yazidis came to Armenia and Georgia during the 19th and early 20th centuries to escape religious persecution.