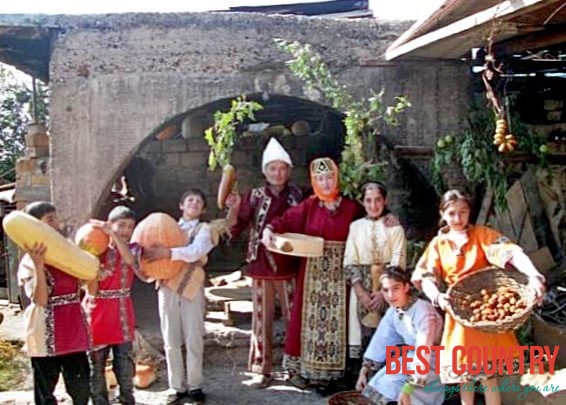 However, during the 18th Century in Armenia, January 1st was accepted as the beginning of the New Year. But many regions in Armenia like Suni, Artzah and Udik, continues to celebrate New Year on Navasardi.

Gradually at the end of the 20th century all Armenians adopted the January 1 st as the official first day of the New Year.

New Year brings with it happiness and excitement for kids. In Armenia too the young await New Year celebrations eagerly.

In ancient times there was a prevalent custom that on New Year's Eve, children gathered in-groups and roamed the streets of their village, singing songs and welcoming the New Year by singing to their neighbors.

In return, they received lots of fruits as gifts. However, there were norms regarding the ritual of gift giving. Within the household, it was a tradition for the family members to exchange gifts, but a wife never received a present from her husband, as this was considered a disgrace.

Traditional Armenian New Year's delicacies include various dried fruits, raisins, but pastries, cakes and harisan are important as they have symbolic significance. The most important pastries being served is Darin with a coin hidden in it.

The family member who found the piece with the hidden coin in it was considered the member who is going to bring luck to the family. The most remarkable meal is the Dolma , which is prepared with rice and grape leaves.

And there is Kata , again an important delicacy, which is made of wheat flour, butter, milk and sugar. These are some of the traditions associated with the celebrations of New Year in Armenia.