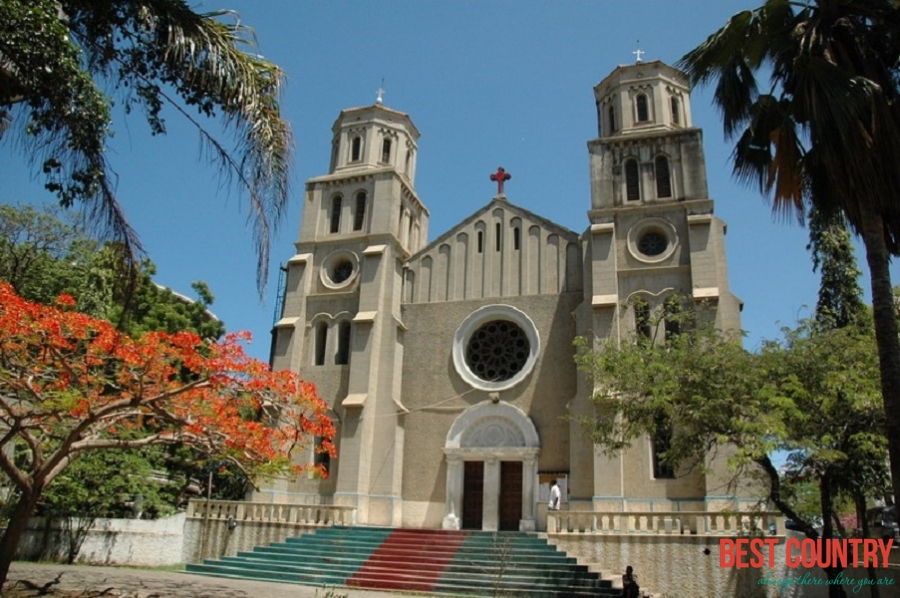 Present in Kenya from 1945, the religion grew to an estimated of 308,000 in 2005 or about 1% of the population. In the 1990s the Bah&#225;'&#237;s in Kenya participated in a nationwide community health project including vaccinations, maintaining latrines and developing clean water sources.

Roman Catholicism was first brought to Kenya in the fifteenth century by the Portuguese, and was spread rapidly during the 20th century by colonists. Today, the main Christian denominations in Kenya are Protestant confessions, which make up about 47.4% of the country's religious composition.

They include the Anglican Church of Kenya, and the Presbyterian, Reformed, Methodist, Baptist, Lutheran, and Pentecostal churches. The Roman Catholic Church represents 23.3% of the population.

The Church of Jesus Christ of Latter-day Saints has more than 10,000 members in 39 congregations in Kenya. They also have 2 family history centres in Kenya, and an employment resource center in Nairobi.

Islam is the religion of approximately 11.1% of the Kenyan population . Islamic organisation dispute the figures suggested. Some sources suggest the number of Muslims in Kenya between 35% and 45%. Most Muslims in Kenya are Sunni, mostly of the Shafii rite. Approximately 7% percent identify themselves as Shia and about 4% identify themselves as Ahmadi Muslims.

Muslims are concentrated mainly in the Coastal and North Eastern Regions. Nairobi has several mosques and a notable Muslim population. There are large and historically significant populations of Swahili Muslims on the coast (most notably in Mombasa, Lamu and Malindi), in the Western Province, and smaller numbers of Somali, Arab and South Asian Muslims.

Religious Shari'ah courts, called Kadhi courts, are given jurisdiction over certain civil matters such as divorce and inheritance under the constitution of Kenya. Muslims have complained that they are targeted and discriminated against by the government, particularly since the 1998 United States embassy bombings in Nairobi and elsewhere. The religions subsiding in Kenya do not display the distinctions between the 42 cultures. They mainly display the traditions of the larger "umbrella" cultures.

There are Hindus living in Kenya. The numbers are estimated to be around 0.14% of the population. They are mainly located in the capital of Kenya, Nairobi, and other urban areas such as Mombasa, Eldoret, Thika and Kisumu.

In the 2009 Census, 922,128 people reported themselves as having "no religion."This is 2.4% of the total, making this group larger than the groups reporting themselves as traditionalists, Hindu or other religion. 61,233, 0.2%, reported that they did not know their religion. There is a stigma against people who are atheists in Kenya.

African religions are typically based on natural phenomena and reverence to ancestors. The dead are presumed to merely transform into another state of being and capable of bringing good fortune or calamity to the living. Most religious rites are therefore centred on appeasing the dead through sacrifices and proper burial rites. The dead's wishes must also be followed to the letter.