Asuncion is the capital of Paraguay 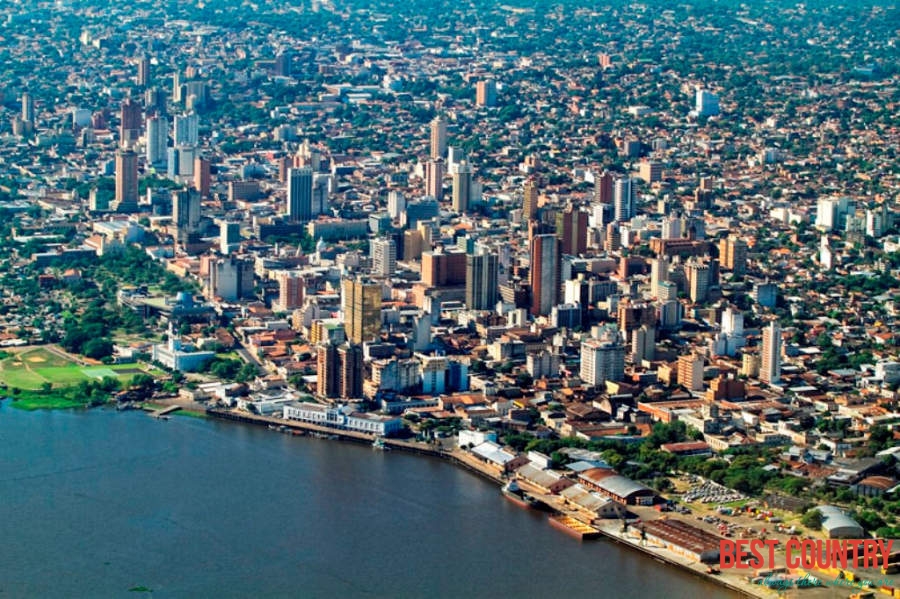 Asuncion, city and capital of Paraguay, occupying a promontory and descending to the Paraguay River near its confluence with the Pilcomayo. The city lies 175 feet (53 metres) above sea level.

The city was so named when a stockade was completed there on the Feast of the Assumption (August 15) in 1537. When Buenos Aires was evacuated in 1541 after an attack by the Pampa Indians, the inhabitants fled to Asunci&#243;n.

It was the headquarters of Spanish colonial activities in eastern South America for nearly half a century before Buenos Aires was refounded. In 1588 Jesuits established mission settlements on the Parana; River to convert the Guarani; population. Intermarriage of Indians and Spaniards contributed to the largely mestizo character of the present Paraguayans. After official separation from Buenos Aires in 1617, Asuncion declined in importance.

Partly because of its remoteness from Spain, nationalist and separatist movements began early in Paraguay: the Jesuits were expelled in 1767, and independence from Spain was declared in Asuncion at midnight on May 14/15, 1811. The city’s strategic position at the head of a great river system linking Argentina, Brazil, and Uruguay, its three enemies in the War of the Triple Alliance (1864/65–1870), led to Asuncion’s capture in 1868, and Brazil occupied and administered it until 1876.

Asuncion has many beautiful flowering trees and several large parks. Adjacent to the river, suburban buildings are still colonial in style—one story with a patio—but the centre of town consists of modern high-rise buildings. The cathedral, presidential palace, and Pantheon of Heroes (a smaller replica of the Invalides in Paris), all built in the 19th century, and the Hotel Guarani, designed by the Brazilian architect Oscar Niemeyer, are among the notable buildings.

As the seat of the national government and of the archbishop of Paraguay, Asuncion dominates social, cultural, and economic trends in Paraguay. Several institutions of higher education, including the Universidad Nacional de Asuncion (1890), the Universidad Catolica “Nuestra Senora de la Asunci&on” (1960), and numerous private universities, are located in Asuncon.

Asuncion is the principal distributing centre of the most densely populated region of Paraguay. Cotton, sugarcane, corn (maize), tobacco, fruit, and cattle products from the rich agricultural and pastoral hinterland are processed in and around the capital. Industrial plants produce textiles, vegetable oils, footwear, flour, small river craft, and tobacco products.