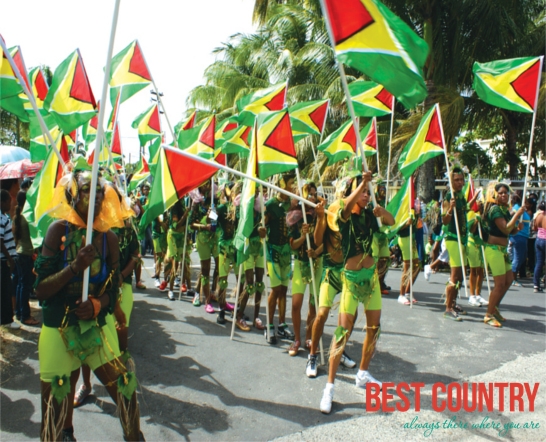 Travel to Guyana and experience some of or all public holidays that is either religious or non religious that are celebrated by all Guyanese. These reflect our motto which states ‘one people, one nation, one destiny.’

Guyanese no matter which religion one may belong to whether it be Hindus, Muslims or Christians are all part of a big community whereby no one is left out and where everyone participate in each other festivities one way or another. Travel Guyana and be able to experience our cultural heritage which is not separated or isolated in compartments and thus cannot exist without the other.

That is, our government had made National Holidays the days of celebrations for each major festival and events of the Guyanese people. This was done so that Guyanese can be actively involved in each others festivals both religious and secular.

The festivals that foster and shape the Guyanese culture both religious and non religious are mentioned below are just a few:

The major Christian festivals that are celebrated in Guyana are Christmas and Easter. These festivals are enjoyed and celebrated by all Guyanese. During this time, people normally do general cleaning of the house, repairs or any other works that need to be done on their homes are taken care of at this time.

This is done in the perspective of the coming Jesus Christ whom was born in Nazareth. The women would then put up clean curtains, scrub the floors among other small jobs they would do. There are plans for the famous black cake. Within days before fruits are soaked before the cake is baked. Among other dishes baked or cooked during this time is pepper pot, garlic pork, ginger beer, among others.

A few nights before Christmas or coming on close to the holiday, the old and even the young folks move from house to house sing carols. There is a famous phase in Guyana that plays on the radio that states, ‘Christmas comes once a year, and every man must have his share, only poor Willy in the jail, drinking sour ginger beer.’

During this time as well is where the men folk do a lot of drinking and eating, the women folk cook and clean, parents take the children to see Father Christmas at some one of the department store, sharing and giving. There are also a lot of parties and dances during this season. Churches hold services that depict the reason for the season. And it does not matter who you are or what religion one might belong to, this season is celebrated by all.

In Guyana St. Stephen’s day is known as Boxing Day which is a national holiday. It is said that St Stephen was a Christian martyr whom was stoned to death. On this day his death is remembered by taking part in all forms of rough sports or games. It is customary or was a custom to take box presents to relatives and friends. But Guyanese celebrate this day by going to parties, picnics, visiting friends, among many other social events.

This is an exciting time of the year for all Guyanese. The Easter season symbolizes the resurrection of Jesus Christ from the dead. On Good Friday businesses are closed, special programmes or movies are played to show the Passion of Christ, and other popular activities are not in action for the day.

But there are many church services that reflect on what the season is about and there is always a somber mood about the place. Then all the fun starts on Easter Sunday and Easter Monday. When looking up in the sky and seeing hundreds of kites flying.

These are in the different shapes and colors; the sweet buzzing sounds of the kites, is wonderful site. The Kite season would normally start a few days or a month before Easter. This is when the children and even adults would buy colored kite paper and start to make their type of kite they would have envisioned they would want to make. In Guyana it is very important for a person to have kite that can fly the highest and buzz the loudest.

It is fun for some to have razor blades at the tail of their kites so that when moves in the sky the wind will swing and will cut the string or punch a kite who is close by. This may sound very mean, but it’s all part of the fun. Kite flying a re mostly done down at the sea wall or in any area that the wind is strong.

In Guyana this one of its most colorful festivals which is known as Divali or Deepavali. This means ‘festival of lights’. This festival is celebrated by Hindus and occurs late in October or early November. Divali is normally celebrated for four days and during this time people pray, fast and greet each. But to understand Divali one needs to know about the great Hindu hero Rama. This can be found in the Ramayana (Hindu holy book) that is often read at festivals. King Dasarata had three wives. His first wife give birth to a son called Rama.

The second wife, Queen Kausalaya, did not take to him very much because he was the next heir to the throne. Instead she wanted her son, whom was Prince Bharat to be king. So she banished Rama and Sita his wife to leave the kingdom forever.

The people were glad for their return including Prince Bharat who was King during his absence. Then king Bharat willing handed over the throne to Prince Rama and welcomed him with open arms. This is when they lit tiny lights along the pathway. Since this return the day is known as Divali, the festivals of lights and is celebrated by the Hindus every year. Every part of the house is cleaned and new curtains are hung.

Special foods on this day that are prepared include metai, halwa and many others. On this day as well, homes are decorated with clay cups that contains oil and a wick. This is always a beautiful and marvelous sight to see. Service at the Hindu temple (Mandir) are always kept at this time. Whilst other people like myself would just love to walk around the villages and communities to admire the diyas that’s always be on display.

Ramadan is one of the most important time of the year for our Muslim brothers and sisters. Thus, it is not always held the same time each year, because the Muslims count their months depending on the moon which generally change year by year.

During this time they are required to fast and do not eat nor drink between sunset and sunrise. In fasting it requires or encourages them to have good thoughts and do kinds things. At the end of this fasting period which is usually a month the Muslims celebrate a day known as ‘Eid’. On this day special food are made and people feast with their family and friends as well as their neighbors. Muslims who can afford to make a pilgrimage to Mecca (the Holy City), once in their lifetime at least would do so.

This is a reminder in memory of the sacrifice of Ishmeal. Where God had asked Abraham to offer his son Ishmeal as a sacrifice to show his devotion to god. Even though Abraham loved his son dearly, he was willing and prepared to do what god has asked him to do. As he was about to carry out his task, god stopped him and told him he was an obedient servant.

And instead of his son god him a goat instead to make sacrifice. Muslim remember as they make small sacrifices of goats and cows and when they are finished they would share it with their family friends, neighbors and to the poor. There are other Muslims festivals of ‘Eid’ that have different meanings.

Is a Hindu festive holiday that is celebrated in March that deals with the triumph of good over evil. Traditionally on this day Hindus wear white and partake in throwing up each other a powder or liquid called abeer. This is a red dye which symbolizes the tyrannical blood of King Kiranya who in Hindu teachings was burnt alive by his son Prince Prahalad because of the way in which the people had suffered by the hands of his father. Powder, perfume, and water are also thrown on family, neighbors, friends, on this day by Hindus and non-Hindus which is very amusing and good natured.

This is another Muslim festival. This festival celebrates the birth and death anniversary of the Prophet Muhammad. Prophet Muhammad was born in Mecca after the death of his father Abdullah. He lived up to sixty-three years. It was this prophet that created the Holy Quran. He dedicated his life to the teachings of Islam. And showed it through his life how wonderful it is to follow Islam.

During this time on Youman Nabi, Mulims in Guyana pay tribute to the mighty prophet Muhammad. This day is spent in prayers. A special service is kept or this occasion as well as religious programmes is broadcast throughout the day. On this day as well they give alms to the poor and persons who are in need.

This word is derived form the Amerindian language and is translated to mean “the celebration of a job well done” or “celebration after hard work”. This day is some times referred to as “Mash” and observed on the 23rd February - which is Republic Day for Guyana – to commemorate Guyana for being a Republic nation. mashramani This is one of the colorful of all festivals in that it’s a fusion of colors.

During this time there are competitions, float parades, masquerades bands, and dancing to and in the streets to beat of steel band music, soca, calypsos and chuckney music. In the streets masqueraders perfume in acrobatic dance routines which is a vivid reminder of Guyana’s African Heritage. There is calypso, soca and chuckney competitions are in full swing as persons vie to be champion King or Queen for the year.