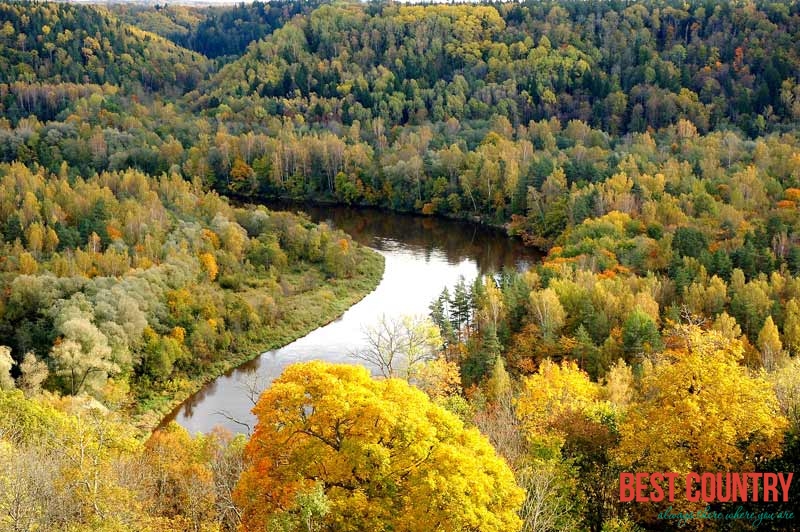 In the summer, daylight hours are long and in the winter short. In December it is still pitch dark at 9:00 A.M., and daylight disappears before 4:00 P.M. This light deprivation may be an important ingredient in deciphering certain aspects of Latvian collective behavior. It may account for the general exuberance and joie de vivre in spring and summer, and the relative taciturnity and melancholy the rest of the year.

The climate is tempered by the Gulf Stream flowing across the Atlantic Ocean from Mexico.

Latvia's proximity to the sea brings high levels of humidity and precipitation, with average annual precipitation of 633 millimeters (24.9 in) in Riga.

There, an average of 180 days per year have precipitation, forty-four days have fog, and only seventy-two days are sunny. Continuous snow cover lasts eighty-two days, and the frost-free period lasts 177 days.

This precipitation has helped provide the abundant water for Latvia's many rivers and lakes, but it has created many problems as well.

A large part of agricultural land requires drainage. Much money has been spent for land amelioration projects involving the installation of drainage pipes, the straightening and deepening of natural streams, the digging of drainage ditches, and the construction of polder dams.

During the 1960s and 1970s, drainage work absorbed about one-third of all agricultural investments in Latvia.

Although accounting for only one-third of 1% of the territory, Latvia was responsible for 11% of all artificially drained land in the former Soviet Union.

An additional problem associated with precipitation is the difficulty of early mechanized sowing and harvesting because of waterlogged fields.

In 1992 Latvia experienced the driest summer in recorded weather history, but unusually heavy rains in the preceding spring kept crop damage below the extent expected.

The moist climate has been a major factor orienting Latvian agriculture toward animal husbandry and dairying. Even most of the field crops, such as barley, oats, and potatoes, are grown for animal feed.