Thailand is a very reasonable place to get plastered on alcohol. Cocktails at street side cocktail stalls typically cost less than USD 3. You can drink a dozen of these and not get drunk, letting you know that potency isn't a strong point with Thai-made cocktails, if they actually get made right. Then again, I've been in Western countries where I've paid USD 7-10 or more for similar drinks, and I could've still recited the alphabet backwards.

The safe bet here when ordering mixed drinks in non-luxury hotel environments is to make the order simple. For instance, ordering a screwdriver or a gimlet leaves your bartender less room to err than if you order a Long Island Iced Tea, which they will invariably screw up.

Drinks containing 'exotic' ingredients, like Blue Curacao and butterscotch schnapps, are risky to order. Thai bartenders will mix them with their own variations, and they probably won't resemble the drink you wanted.

If you're a tequila connoisseur, remind yourself you are very, very far from Mexico. Tequila is readily available, but usually it's not the finer resposado type nor is it 100% agave. You would have to visit an upper tier hotel's bar or an expensive import market to obtain fine tequila.

For that matter, you'd have to visit the posher places to get fine alcohol period. In Western bars you can request top shelf liquors and pay the premium. Street side bars in Thailand won't stock Grey Goose or Gran Patron. Imported alcohols from most countries, particularly the European Union and North America, incur a hefty excise tax and duty.

Vietnam takes it a step further and rips off the Gilbey's bottle design and logo to manufacture their own brand that is even cheaper. Mimicking well-known Western brands is de rigeur in this part of the world. Western copyright infringement isn't something the Thai government is losing any sleep over.

Indian-made vodkas and rums are available cheaply. If you want to step up the ladder a few rungs to get mid-range Finlandia or Absolut vodkas, distilled in Finland and Sweden, respectively, you're looking at about USD 25 per 700 ml bottle. For a change, the duty free prices at Suvarnabhumi Airport really are a savings. There, a 1 liter bottle will run about USD 20.

Wine is relatively expensive, wherever it's from. Chilean, South African, Australian, American, and French wines can be found easily, though the brand selection can be thin.

The least expensive bottles of anything passable will cost at least USD 13, probably more. Thailand has a developing wine industry of its own. None of these locally-made bottles would incur any duties, and yet strangely, they cost the same or more than the superior-made imports.

The drinks of choice among Thais and resident foreigners are beer and locally-produced whiskey and rum. With two recent price hikes, Thailand-made beer ain't as cheap as it used to be. All the same, no one can say that paying USD 1 to 1.80 for a 630 ml bottle of beer, depending on brand, is going to break the bank. Archa, Cheers, Leo, and Chang are found on the lower end of the price scale. Singha, Heineken, Tiger, and upstart Federbr&#228;u are on the higher end. 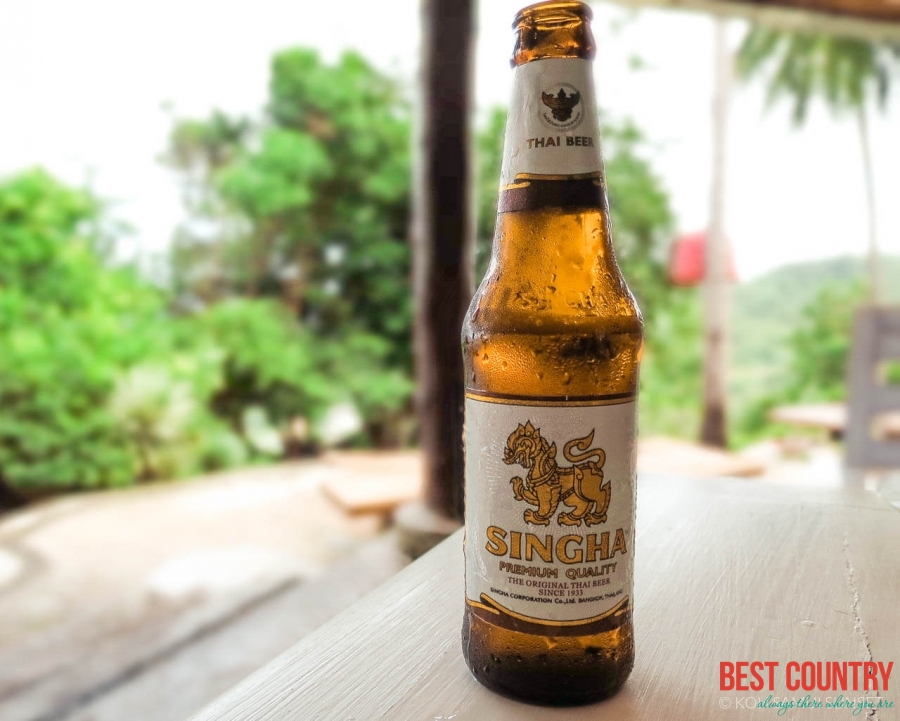 Singha is the best known internationally and the oldest brew in the Kingdom. Chang entered the picture in the last decade and dethroned Singha as the champ, mainly because of Chang's lower price. These two beers remain the most popular and can be found anywhere.

Common, but less common than the two champs, is Leo and Tiger. The lesser-ranked brands may be available at your local 7-11 or Family Mart or may not be. Look closely on the beer labels, and you'll soon realize that the same breweries are spitting out high-end and a low-end offerings to cover all bases. Tiger and Cheers are made by the same brewery, competing in different price ranges. So are Singha and Leo, San Miguel and Red Horse, and Chang and Federbru.

There aren't many Thailand-produced beers given the size of the country. The microbrewery renaissance that hit Western countries in the 1990's has yet to make an impact in Thailand.

For a recent New Year's Eve party with guests from abroad, we purchased every mainstream Thailand-produced beer we could get our hands on. A pricey brew like Phuket Beer, made by a mainstream brewery but only available in limited supply at premium supermarkets, was not considered, as most people living in Thailand have never seen it. The amount of beers remaining under the mainstream umbrella was just twelve. Not all from this mainstream dozen are indigenously Thai either. They're just brewed locally so as to escape high import duties. The most popular and expensive of these non-Thai Thai beers is Heineken.

Doug's Republic won't endorse it, but consumers around the world seem to. The Singaporean Tiger Beer seems to be quite popular, too. Given its average quality, one can only conclude it was Asia Pacific Breweries' deep pockets that allowed this beer that's older than Singha to spread through not just Thailand, but Malaysia, Vietnam, Cambodia, China, New Zealand, Papua New Guinea, India, Sri Lanka, Laos, and Mongolia. Of course, Tiger, like Chang, like Leo, like Cheers, like every other beer, is a "gold medal winner."

Gold medal winning beers in Thailand are as popular and as meaningless as the terms "award-winning filmmakers." Less frequently seen, but still widely available if searched for, are Asahi and San Miguel. We're sure they've also won gold medals.

The Thais love their hard liquors, particularly Sangsom. Distilled from sugarcane, Sangsom is a rum, not a whiskey, although people often refer to it as whiskey. Sangsom tastes nothing like the fine Scotch whiskeys your grandparents drank (or wished they drank) or the Caribbean rums we're sure you do drink.

Sangsom dominates its market niche, with more than 70% market share in the "disgusting whiskeys of Thailand" category. A 750 ml bottle sells in a supermarket for around USD 7 to USD 9. A smaller-sized 300 ml bottle is also common. Similan and Sangthip are better rums and cost about 10% more than the ubiquitous Sangsom. In a bar, you'll pay double.

The real whiskey is made out of rice. In Laos, they call this white alcohol Lao Lao. In Thailand, Lao Khao. It's bad in any language.