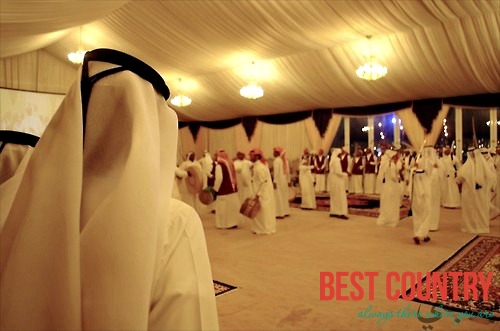 Weddings in any culture are a cause for expensive fanfare and hectic preparations. In the Arabian Gulf, however, weddings are conducted in a unique manner, observant of the gender segregation maintained between nationals in other facets of their private lives.

Typically a couple will have two wedding celebrations: a female and a male one so that both sexes can congratulate the families of the new couple.

Towards the end of the ladies' gathering, around midnight or even later, the groom will come to collect his bride along with any of the male members of her family such as her father or brother(s).

If you have driven around Doha and wondered what the large tents, with formal chairs stacked outside, are for, then you have driven by the site of a male Qatari wedding.

The male wedding is typically held in an outdoor tent, either in traditional Bedouin style, with an open front and traditional red covered cushions, or the modern elaborate tent which can include air conditioning units and other amenities.

The tent and its location depend on the preferences of the groom's family. After ritual greetings between the groom, his family members, the bride's family members, and all of the guests, there may be men who dance with swords or musical performances by an oud player on the traditional stringed instrument. Women are not allowed at this event, including female family members of either side, but it is often videotaped.

In most cases, you will be unlikely to know the bride herself, but will receive an invitation through her cousin or friend.

The invitation itself will announce that you are in good company: generally printed on heavy cream paper, with the couple's and party details in Arabic calligraphy, it is embellished with sequins, crystals, or ribbon, ensuring that each guest anticipates a lavish event.

Going to Qatari women's wedding can make you feel like being a bride yourself. Everyone, particularly those closest to the bride, will spend the entire day at the beauty salon, being done up with elaborate coiffures, immaculate nails, and often the removal of facial and body hair. Thus polished, dressing in couture gowns and jewelry follows.

It is not uncommon for women to shop for months prior to a wedding, often outside of Qatar, for a designer gown that no one else will be wearing. The more opulent the wedding, the harder the search for the perfect gown (remember: these are the guests - the bride must out do them all).

It is not unusual to see Roberto Cavalli, Dior, Gucci, or any of the worldwide fashion labels swirling around you once you enter the ballroom. White is not only the bride's color in Qatar, and you may see quite a few other white gowns amongst the attendees - though nothing as elaborate as the bride herself, of course.

The hall for the women's reception is another indication of the evening to come. Invitations to the Ritz Carlton ballroom or Dafna hall at the Sheraton mean large affairs, with at least four to five hundred women in attendance.

Al Dana club and Regency hall are also popular for weddings. Inside the invitation you'll receive a 'ticket' or small token that you must present to the guards at the entrance of the hall.

These are usually in themes such as a cut out heart, and the invitation is yours to keep. No cameras are allowed at women's weddings (and women's gatherings in general) - not even phones that have cameras, because, due to the absence of men, none of the women will be wearing their Islamic coverings.

On the occasions where the band has a male singer, he is usually positioned behind a curtain so as not to disturb the enjoyment of the guests. When the groom and other male family members arrive at the end of the evening, women replace their abayas and shaylas and the bride stands out in her wedding finery.

Passing through security and into the gathering, there will be a gauntlet of female relatives of the bride and groom. Each of them should be greeted with a kiss near the cheek, often multiple ones if you know the person very well. If you don't know anyone in this line, it's best to smile and offer mabrook, or congratulations in Arabic, as you pass through.

Generally the bride will enter after her guests have been waiting about an hour or so after the printed start time for the evening. If the invitation reads 9 PM, guests will arrive at 10 PM, and the bride herself an hour or so later.

Her entrance is a dramatic event - marked sometimes with fog, a light display, and raising of a curtain Ð and her slow walk up towards a delicate sofa in the center of the room captures everyone's attention.

Once she has been seated on the sofa, people come to dance before her or greet her. She is generally surrounded by her sisters, and the tables closest to the platform where she is seated are occupied by other close friends and relatives.

Once inside the hall, you'll see a profusion of color, fabric, and make up, sights invisible on the everyday streets of Qatar.

During a three or four course meal, all the guests will dance in honor of the bride, throwing money in appreciation of the band that will be later collected and distributed.

This is a moment when the living generations of a family gather together: grandmothers in abayas with shiny gold face coverings, the young women in their fashionable evening wear, and children, scuffing their new dress shoes.