Qatar's traditional cuisine has been strongly influenced by migrants from Iran and India, and more recently North Africa. 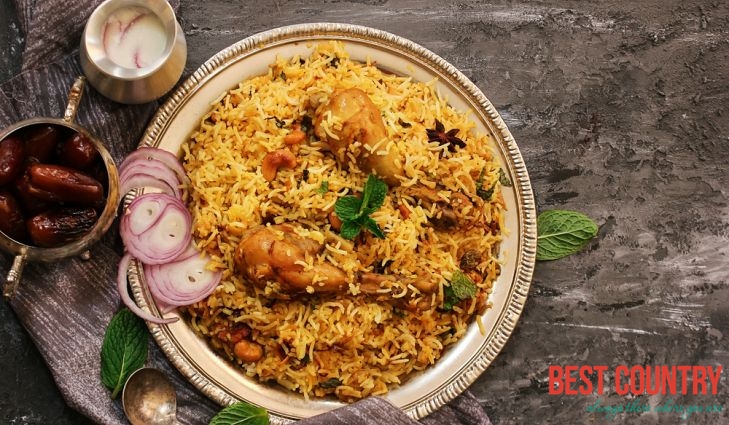 The number of foreigners working in the country has led to modern Qatari eating habits being influenced by food from around the world.

Many of the country's traditional dishes are based around seafood especially lobster, crab, tuna, red snapper and shrimp and the many different kinds of dates native to the region.

All meat is halal, which is prepared in accordance with Muslim laws.

Many locally grown foods, such as dates, sour apples and fresh almonds are considered delicacies.

One of Qatar's most important traditional dishes is machbous which is a stew of richly spiced rice with either seafood, meat or both. Traditionally, it is served in a large communal platter.

Another favourite is lamb or mutton served with yogurt made from cow's or goat's milk.

Other important Qatari specialities include:

Hummus, a dip made from chickpeas and tahini, a sesame seed paste

Taboulleh, a cracked wheat, or bulgur dish flavoured with parsley and mint

Biriani, a spiced rice dish which is mixed with chicken or lamb

Motabel, a paste made from lightly cooked aubergine mixed with garlic and tahini
Ghuzi, a whole roast lamb on a bed of rice and nuts.

The region also has some delicious traditional desserts, including mehalabiya, a rose water and pistachio pudding, umm ali, a bread pudding with nuts and white raisins, and esh asaraya a cheesecake topped with cream.

Breakfast is usually a light meal, which is eaten early and includes yogurt, cheese and olives eaten with coffee.

A main midday meal is usually heavy, beginning with an appetiser, or mezze, served with flat Arabic bread followed by a stew of lamb or fish with cooked vegetables and salad.

Many people do not use cutlery and scoop their food using bread. The evening meal is typically a light snack, except during Ramadan and on special occasions.