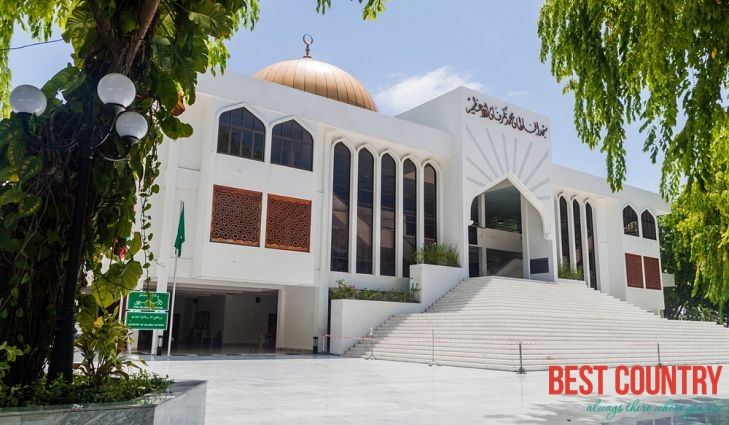 With the exception of Shia members of the Indian trading community, Maldivians are Sunni Muslims; adherence to Islam, the state religion since the twelfth century, is required for citizenship.

The importance of Islam in Maldives is further evident in the lack of a secular legal system.

Instead, the traditional Islamic law code of sharia, known in Dhivehi as sariatu, forms the basic law code of Maldives as interpreted to conform to local Maldivian conditions by the president, the attorney general, the Ministry of Home Affairs, and the Majlis.

On the inhabited islands, the miski, or mosque, forms the central place where Islam is practiced

Because Friday is the most important day for Muslims to attend mosque, shops and offices in towns and villages close around 11 a.m., and the sermon begins by 12:30 p.m. Most inhabited islands have several mosques; Male has more than thirty. Most mosques are whitewashed buildings constructed of coral stone with corrugated iron or thatched roofs.

In Male, the Islamic Center and the Grand Friday Mosque, built in 1984 with funding from the Persian Gulf states, Pakistan, Brunei, and Malaysia, are imposing elegant structures.

The gold-colored dome of this mosque is the first structure sighted when approaching Male. In mid-1991 Maldives had a total of 724 mosques and 266 women's mosques

Prayer sessions are held five times daily. Mudimu, the mosque caretakers, make the call, but tape recordings rather than the human voice are often used. Most shops and offices close for fifteen minutes after each call.

During the ninth Muslim month of Ramadan, Muslims fast during the daylight hours. Therefore, caf&#200;s and restaurants are closed during the day, and working hours are limited.

The exact occurrence of Ramadan varies each year because it depends on the lunar cycle. Ramadan begins with the new moon and ends with the sighting of the next new moon

The isolation of Maldives from the historical centers of Islam in the Middle East and Asia has allowed some pre-Islamic beliefs and attitudes to survive.

Western anthropologist Maloney during his 1970s fieldwork in Maldives reports being told by a Muslim cleric that for most Maldivians Islam is "largely a matter of observing ablutions, fasting, and reciting incomprehensible Arabic prayer formulas."

There is a widespread belief in jinns, or evil spirits.For protection against such evils, people often resort to various charms and spells.

The extent of these beliefs has led some observers to identify a magico-religious system parallel to Islam known as fandita, which provides a more personal way for the islanders to deal with either actual or perceived problems in their lives.