Education in the Maldives 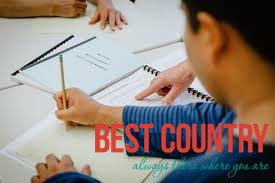 Traditionally children aged three and up in the Maldives were educated in Islamic "Makthab" classes, generally using a single large room or the shelter of tree.

The children learn simple arithmetic, Dhivehi and some Arabic, and practise reciting the Qur'an. These private schools still exist, but western-style schooling is becoming more pervasive.

The first western-style school in the Maldives is the Majeediyya School, a secondary established in 1927. The school was originally co-educational, but it was felt necessary to create a second school for girls (Aminiyya School) in 1944.

Based on a study by educational advisors from UNESCO, the Government of Maldives began implementation of the Educational Development Project on 6 October 1976.

Curriculum Development began in 1976, while Teacher Training began in 1977. Simultaneously other Programmes were introduced and continued through 1970s and until mid 1980s from where on the First Ten Year Master Plan for Educational (1986-1995) began implementation. Second Master Plan was implemented 1996-2005.

These were the bases of educational development in the Maldives begun by the government of President Nasir continued by President Gayoom.

As of 2002, the President's Office claimed that universal primary education has almost been achieved and the literacy rate had improved from 70 percent in 1978 to 98.82 percent. In 2005, there were 106,220 students in schools, or 40% of the total population.

Maldives National University, which was previously known as the Maldives College of Higher Education.

The college had offered 95% of the post-secondary education in the Maldives:

Villa College , which has offered degree courses in computing and IT since 2007.

The University of Sri Jayewardenepura in Sri Lanka plans to open a university in the Maldives, initially a management faculty.