The quality of food in general in Cyprus is very good. The vegetables are fresh, plentiful and varied. We have not yet discovered the 'benefits' of irradiation' and fresh local produce can be bought in carrier bags as they begin to 'turn' for about Ј1 a bag, no matter what the contents.

This is very handy for preparing such long lasting staples as tomato sauce and various other pickles and jams.

It is also a good reason to purchase a fruit juicer and freezer. Please note that for ease of use, the local names we use here are not necessarily spelled correctly, but if you say them as they are written, you should be understood.

If you are a vegetarian, you will find meat on every menu, but you will also be delighted with the salads and the vegetables you will also find, some are prepared in the oven with unusual dishes such as large butter beans casseroled with vegetables in the oven, Cauliflower oven baked in tomato sauce with Commanderia, green beans also in a tomato sauce, a vegetable named kolokasi, ( which needs to be broken into pieces and not sliced or it will become slimy,) again cooked with tomato's, different types of bean (fasolia) haricot beans cooked with carrot, potatoes, celery, onions and tomato, black eyed beans cooked with lahana (a type of spinach) and all manner of stuffed peppers, courgette, mushrooms and aubergines. Pourghouri (pronounce it poor gory) is a nice dish, cracked bulgher wheat with vermicelli cooked with onion and tomatoes. Similar to a cous cous, although not really, but often called cous cous here by mistake.

The pork here is probably the best in the world. You will find cuts of pork which have been smoked or marinaded in wine, lountza and hiromeri. There are spicy sausages with garlic called loukanika and very very strong ones called pastourma.

There are all kinds of breads and pastries and if you are an adventurous eater you will find many exciting and different dishes to try. Olive oil and lemon juice plays a large part in the Cypriot cuisine and if you go to the villages you can find some excellent home produced varieties of olive oil normally handed over in an ex-wine bottle.

Halloumi is a Cypriot cheese with a slightly pleasant rubbery consistency which fries or grills beautifully and is usually included in the first course of a meze for you to try.

It is a versatile cheese and can be fried, grilled, put into pies called tiropittas or eaten 'raw', grated onto pasta or pizza and is a delicacy made from goat's milk, sheep's milk or cow's milk. The stronger and more expensive village cheeses are often made from sheep's milk.

Feta is another cheese used extensively in Cyprus dishes. It is, along with the olives what makes a Greek salad Greek. It is quite a salty cheese for its type, and if you want to taste something in the same line, but softer and milder, ask for Anari.

If you can find good village fetta, rather than being stronger, it is in fact rounder and very different to the commercial brands. A nice tasty hard cheese to try is called Kefalotiri. (Tyri or tiri means cheese)

You can also buy any European foodstuffs that you could wish for from Heinz ketchup to Swiss chocolate, as the shopping facilities on the island are brilliant.

Sweet lovers will also be impressed. We have a lot of sweet pastry products, some saturated with honey or sugar syrup, mixed with nuts and fruit, you will find a good selection in any of the bakeries in the towns or villages.

There are sugar coated peanuts and almonds, some with a burnt caramel gone hard, some smothered with sesame seeds, mmmm, the famous Cyprus delight, known elsewhere as Turkish delight, grape juice dripped down a string to produce a sweet which is often embedded with almonds (shoudzoukou) and mounds of dates, nuts, figs, apricots and other fruits.

Take away food and kebabs

Most take away's do a selection from fish and chips to roast chicken and roast potatoes, all at very reasonable prices and at most taverns and restaurants the standard menu includes kebabs, chops, steaks and fish.

You can also order a Meze, (Which everyone who comes here should try at least once) which is an array of many of the dishes which the restaurant produces, usually only served for two persons or more. Be prepared for a long, enormous meal though, save yourself at the beginning, otherwise just when you think you will burst the main dishes will arrive!

To try the best meze my advice would be to drive out to an inland village and find a non touristy restaurant, the meze will be of a superior quality and you will find that the sheiftalia are not the larger commercially produced ones for the tourists, but the small tasty ones.

Be aware if you do this that the cheeses will be stronger and you may be presented with offal as this is also a delicacy in Cyprus.

The best value meal we know of is the trusty kebab. You get a pitta bread full of tomatoes, onion, cucumber and parsley at worst or with cabbage, lettuce and either pork meat cooked on a skewer over charcoal, or with sheftalia, (to try both at the same time ask for a mixed kebab) some very nice sausagey things cooked in the same way. 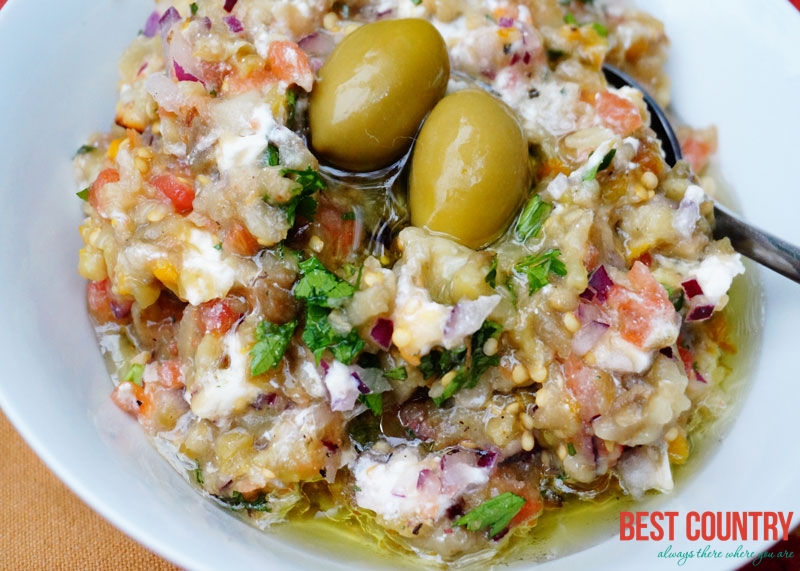 Often you can have a piece of lemon, pickled pepper, tzaziki (yoghurt with cucumber) or tashi (tahini sauce) as an optional extra. This filling meal still only costs from between 2.5 Euros to 5 Euros.

There is also the donor kebab or a variation on that in Cyprus is called yiro, which is either pork or chicken strips wrapped around a spit and cooked until it is gone. This is often served on greek bread, smaller than a standard pitta bread, thicker and softer, similar to a Kashmiri breakfast bread.

Another nice option is a simple chicken kebab, the same as the pork souvlaki, only with chicken on a stick cooked over a charcoal fire. All of these variations should keep you busy for a week or so and cost considerably less than a restaurant meal. Most kebab shops have an area for you to eat in and if not, no one minds you eating on the hoof or in the park.

The potatoes from Cyprus are famous, and rightly so, they are delicious, so it is unfortunate that a new disease is creeping into the kitchens of many restaurants...the frozen chip !

The only way to combat it's growth I have decided is to ask...before you order if the chips are frozen (most owners seem to under the impression that people prefer 'the McDonalds chip') If you prefer real potato chips....ask for them...it may be the only way to get the message across.

There are many many restaurants, trouble is there are not too many that we know to recommend, but we are still looking and hope to have some more for you soon.

If you know of a good place, let us know and we will try it anonymously. We do put what we like in the sections on the different towns, as we live in Larnaca we have more here than anywhere else.