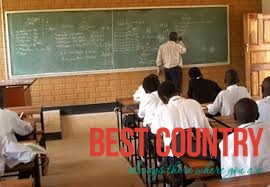 Broadly, Zambian education can be split into two; Public education and Private education. Under private education, we can also add religious education. But, a larger percentage of the education system in Zambia is made up of public institutions.In public schools (and some private schools), the normal dress code is the school uniform.

The majority of Zambians have been educated through Public schools. All public schools are the responsibility of the state.Due to a shortage of school places as a result of having fallen behind in the construction of new schools to catch up with the ever increasing population, the government resorted to maximising the use of school buildings.

Although private education is beyond the reach of many Zambians, a lot of private schools have sprung up.

Private schools are known for a low student to teacher ratio, a small number of student enrollment and high academic achievements. This has enticed many parents who can afford to take their children to private schools.

Until recently, preschools were not part of early childhood education for the majority of Zambians. Today however, there are preschools in most of the residential areas of major towns and cities.

Primary School education is broken into the lower and upper primary. Primary education starts from the age of six or seven and lasts for seven years.

Pupils take their exams at the end of the seven years of schooling. Successful ones proceed to secondary/high school.

The requirement for entry to secondary school is a primary school certificate or completion of primary education.

Colleges in Zambia differ widely depending on what field(s) the college offers. There are those which offer engineering, journalism, nursing, teaching, law, dentistry, information technology, agriculture and many other courses. And duration of the course also differs.

Generally, the cost of college education largely depends on whether the institution is public or private.

Because of a number of teachers going outside the country and a rise in a number of private schools, public schools are finding it hard to retain qualified teachers, leading to a shortage of teachers in some schools. Especially hard-hit are schools in rural areas. They also face problems in recruiting teachers who usually vie for urban areas.