The cuisine of Mauritania includes the culinary practices of the West African nation of Mauritania. Historically, what is now Mauritania, has been influenced by Arab and African peoples who have lived in and traversed the "stark" landscape marked with Sahara desert dunes in caravans. 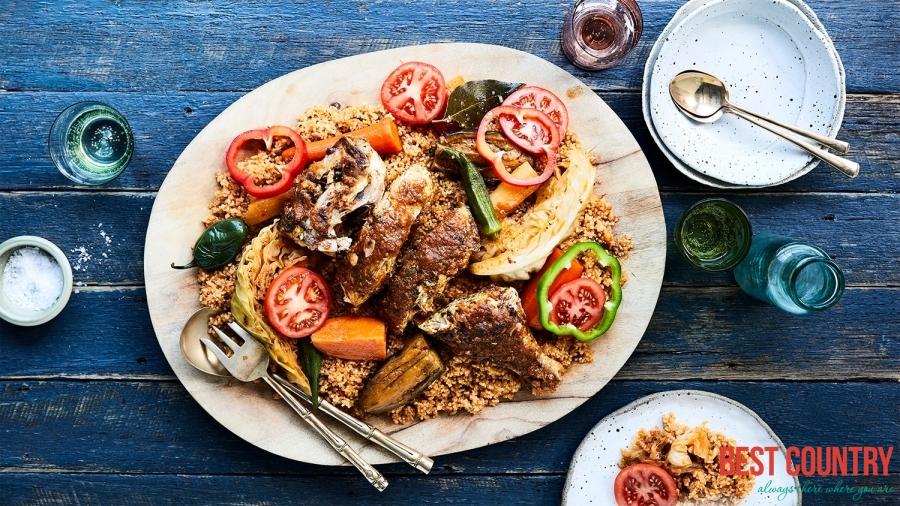 There is overlap with Moroccan cuisine in the north and Senegalese cuisine in the south. French colonial influence (Mauritania was a colony until 1960) has also played a role in influencing the cuisine of the relatively isolated land.

Alcohol is prohibited in the Muslim faith and its sale is largely limited to hotels. Mint tea is widely consumed and poured from height to create foam. Traditionally, meals are eaten communally.

Thieboudienne (Cheb-u-jin), a coastal dish of fish and rice, which is considered the national dish of Mauritania. It is served in a white and red sauce, usually made from tomatoes.

Yassa poulet, chicken rotisserie with vegetables served over french fries or rice. It is originally a Senegalese dish from the Wolof and Pulaar tribes.

Mahfe, goat or camel meat in a peanut, okra and tomato sauce. It is served over rice and can also be made without meat (for vegetarians).

Maff, meat and vegetables in a peanut-based sauce

Zrig, camel milk (made from Dromedaries)