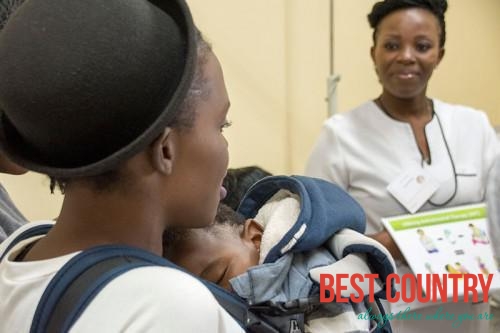 The Ministry of Public Health in Cameroon is responsible for the maintenance of all public health services. Many missionaries maintain health and leprosy centers.

The government is pursuing a vigorous policy of public health improvement, with considerable success in reducing sleeping sickness, leprosy, and other endemic diseases.

The demand for all types of health services and equipment is high and constant. The need for modern equipment is especially urgent, with many clinics using outdated equipment, some of which is imported illegally from Nigeria.

There is also a shortage in professional medical staff, partially caused by public service hiring quotas.

Therefore the staff that works is badly paid and has too much work to do, which makes it difficult to treat patients adequately. Many doctors and nurses which were trained in Cameroon emigrate to Europe - but also to South Africa and Asia - for that reason.

In 2005, 62 percent of the population had access to safe drinking water and 92 percent had adequate sanitation.

The 2014 CIA estimated average life expectancy in Cameroon was 57.35 years.

Malaria is prevalent in the Bénoué River Valley, the basin of Lake Chad, the coastal region, and the forests of southern Cameroon. A large percentage of the adult population is affected. Other serious water-borne diseases are schistosomiasis and sleeping sickness, which is spread by the tsetse fly. Cameroon lies in the yellow fever endemic zone.

In 1999 Cameroon immunized children up to one year old for tuberculosis (52 percent); diphtheria, pertussis, and tetanus (48 percent); polio (37 percent); and measles (31 percent). The infant mortality in 2005 was 65 per 1,000 live births. An estimated 29 percent of children under the age of five suffered from malnutrition.

In June 2011, the United Nations Population Fund released a report on The State of the World's Midwifery. It contained new data on the midwifery workforce and policies relating to newborn and maternal mortality for 58 countries. The 2010 maternal mortality rate per 100,000 births for Cameroon is 600. This is compared with 704.6 in 2008 and 522.6 in 1990.

The under 5 mortality rate, per 1,000 births is 155 and the neonatal mortality as a percentage of under 5's mortality is 24. The aim of this report is to highlight ways in which the Millennium Development Goals can be achieved, particularly Goal 4 – Reduce child mortality and Goal 5 – improve maternal death. In Cameroon the number of midwives per 1,000 live births is 0.2 and the lifetime risk of death for pregnant women 1 in 35.