Cameroonian cuisine is one of the most varied in Africa due to its location on the crossroads between the north, west, and centre of the continent; added to this is the profound influence of French food, a legacy of the colonial era. 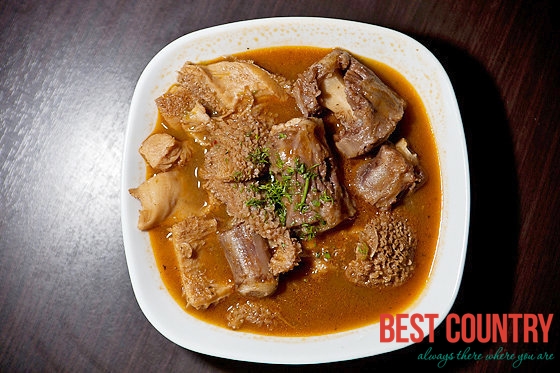 Staple foods in Cameroon include cassava, cocoyam, yam, rice, plantain, potato, maize, beans, and millet, and Ndole, Achu. The French introduced French bread and Italian pasta, which are not as widely consumed, however, due to their price.

The main source of protein for most inhabitants is fish, with poultry and meat being too expensive for anything other than special occasions. Bush meat, however, is commonly consumed, some of the most sought after species being the pangolin, the porcupine and the giant rat. There is also a thriving, illegal trade in endangered bush meat species such as chimpanzee and gorilla.

Given that Cameroon was colonised repeatedly, New World staples were introduced several centuries ago, as well as European cooking techniques and culture. It is also influenced by its geography, with distinct differences between its North and South regions.Cameroon is made up of over 250 ethnic groups and cuisine differs between ethnic group and also by region.

The soil of most of the country is very fertile and a wide variety of vegetables and fruits, both domestic and imported species, are grown. These include:

Among Cameroonian specialties are brochettes, known locally as soya (a kind of barbecued kebab made from either chicken, beef, or goat), sangah (a mixture of maize, cassava leaf and palmnut juice) and ndol (a spicy stew containing bitterleaf greens, meat, shrimp, pork rind, and peanut paste). Curries, soups and fish dishes abound, as well as meats on skewers. Insects are eaten in some parts of the country (particularly the forested regions).