The cuisine of Botswana is unique but also shares some characteristics with other cuisines of Southern Africa. Examples of Setswana food include pap, samp, vetkoek, and mopane worms. A food unique to Botswana is seswaa, heavily salted mashed-up meat.

The markets of Botswana are filled with a large variety of foods. Some are grown locally using irrigation and some are imported from neighbouring countries. A large quantity of high-quality beef is raised in Botswana. Lamb, mutton, chicken and other meats are also plentiful. Beef is the most popular meat, followed by goat meat. River fish are also part of Botswana cuisine. 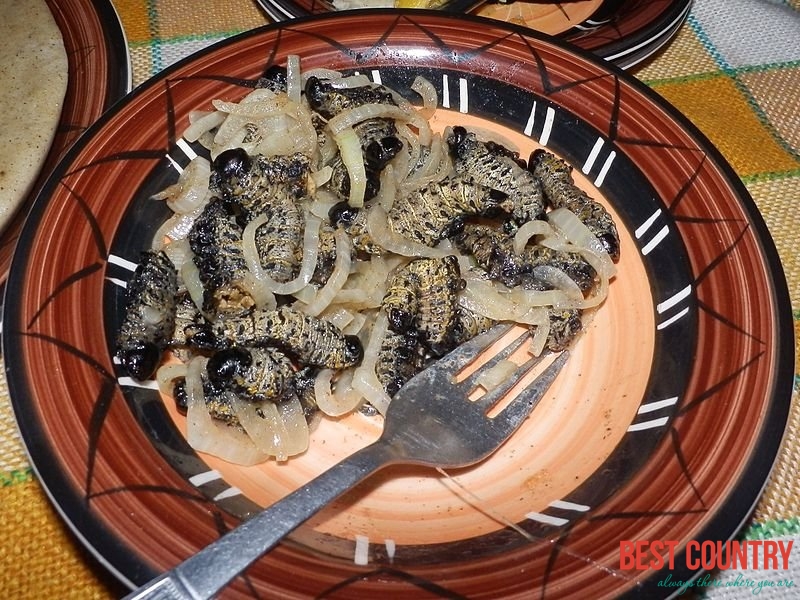 Sorghum and maize are the main crops grown in Botswana. Wheat and rice and other kinds of cereals not grown locally are imported. Many different kinds of beans are grown, including cow peas, ditloo, and letlhodi. Peanuts (groundnuts) are also grown. Many vegetables are grown, such as spinach, carrots, cabbage, onions, potatoes, tomatoes, sweet potatoes and lettuce. There are some vegetables that grow in the wild that are available seasonally. Dried bean leaves are a popular Setswana food.

Many fruits are locally available, including marula. Watermelons, believed to have come originally from Botswana, are plentiful in season. Another kind of melon, called lerotse or lekatane, is also grown. There are some kinds of wild melon found in sandy desert areas which are an important food and water source for the people who live in those areas. Many vegetables are seasonal and are often dried or salted for preservation. There are many different ways of cooking dried vegetables.

Seswaa, or chotlho, is a very popular traditional meat dish made for most special occasions. Usually prepared by men, it is cooked in a three-legged iron pot, simmered until soft, with only salt and water. Another popular dish is serobe, in which the intestines and some inside parts of goat, sheep or cow are cooked until soft. If the animal is sheep or goat, the trotters are included.

Porridge (bogobe) is made by putting sorghum, maize or millet flour into boiling water, stirring into a soft paste, and then cooking it slowly. Sometimes the sorghum or maize is fermented, and milk and sugar added. This dish is called ting. Without the milk and sugar, ting is sometimes eaten with meat or vegetables as lunch or dinner. Another way of making bogobe is to add sour milk and a cooking melon (lerotse). This dish is called tophi by the Kalanga tribe.

Bread flour is not part of the basic diet, but has been imported for some years, so there are various bread recipes that have become part of the national food. The most common are dumplings (matemekwane), flat cakes (diphaphatha) and fat cakes (magwinya). For these, the flour is made into dough which is cooked in different ways such as boiling with meat, cooking in hot oil or in hot coals.

Popular foods in remote areas include morama bean, a huge underground tuber, and an edible fungus. Mopane worm, a grub that looks a bit like a caterpillar, is cooked in hot ashes, boiled, or dried and fried.