Holidays In The USA 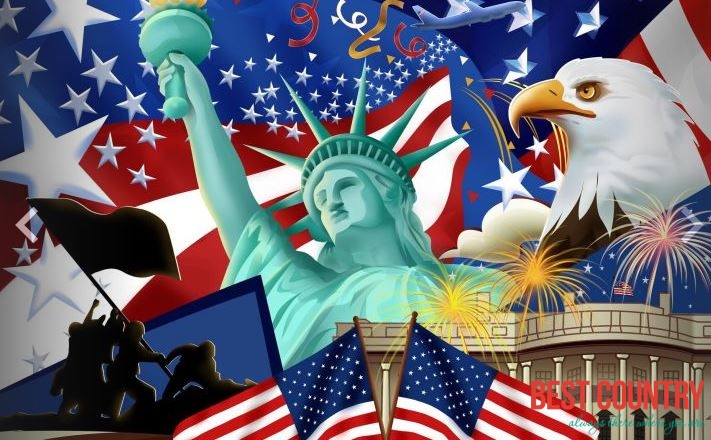 American holidays are strikingly different in origin and show surprising similarities in the manner of their celebration. No matter what the holiday's origin is, they all seem to be the same thing. A holiday has simply become, for most Americans, a day off from work, though some (for example, Thanksgiving and Christmas) retain some individuality.

The major holidays in the USA are:

People stay awake until after midnight on December 31st to "watch the Old Year out and the New Year in." Many parties are given on this night. Theatres, night clubs, restaurants are crowded. When midnight comes, they greet the New Year: people gather in the streets of big cities, they ring bells, blow whistles and automobile horns, some shoot off guns and firecrackers.

It is not a national holiday. Banks and offices do not close, but it is a happy little festival in honour of St Valentine, patron of sweethearts and lovers. It is widely celebrated among people of all ages by the exchange of "valentines." A "valentine" may mean a special greeting card or a little present. The greeting cards are often coloured red, have red trimmings and pictures of hearts.

In addition to commemorating the birth of the United States' first President, it's a great day for shoppers. The department stores of Washington, DC, stated a national tradition of sales marked by unusual bargains. It is not a national holiday. Many schools, offices and banks close for this day, some stay open. The US Congress observes the birthday of George Washington with speeches and readings from his works.

Easter is in memory of the Resurrection of Jesus Christ. It falls on the first Sunday after the first full moon between March, 22, and April, 25. The 40 days before Easter are called Lent. Just before Easter, schools and colleges usually close. Students have a week or ten days of spring vacation. Easter is a church holiday, and many churches have an outdoor sunrise service. People give each other presents of eggs which are the symbol of new life. There is a popular belief that wearing three new things on Easter will bring good luck throughout the year.

It is a national holiday. Schools, banks and offices close for the day. On that day, Americans honour the servicemen who gave their lives in past wars. Schools, clubs and churches decorate the cemeteries. They put up the flags on the graves of the army, navy and airmen. They hold memorial services in churches, halls, parks and cemeteries. In addition to solemn services Memorial Day is often marked by other, more joyful ceremonies: colourful parades, sports competitions.

On this day, in 1776, America signed the Declaration of Independence. It is a national public holiday celebrated with fireworks and speeches praising "Americanism, democracy, free enterprise".

It is a holiday of recreation. It marks the end of summer and the beginning of autumn. Vacation time is over. Resorts, camps and beaches close ... Parents go to summer camps and take their children back home.

Halloween is the day or evening before All Saints' Day. Halloween customs date back to a time when people believed in devils, witches and ghosts. They thought that these evil spirits could do all kinds of damage to property. Some people tried to ward off witches by painting magic signs on their barns. Others tried to scare them away by nailing a piece of iron, such as a horseshoe, over the door.

Now most people do not believe in evil spirits. On this day they just have a nice holiday. Children dress up as ghosts and witches and go out into the streets to beg. They go from house to house and say: "Trick of treat!", meaning "Give me a treat or I'll play a trick on you". People give them candy, cookies and apples.

A favourite custom is to make a jack-o'-lantem. Children scrape out a pumpkin and cut the outlines of eyes, nose and mouth in its side. They light a candle inside the pumpkin to scare their friends. This custom refers to a man named Jack who still wanders around the earth lighting his way with a pumpkin lantern.

On this day, the radio and television broadcast services held at the National Cemetery in Arlington. High officials come from Washington to attend these services. They place a wreath of flowers at the tomb of the Unknown Soldier. All stand in silence for a few minutes at eleven o'clock to honour the memory of the servicemen killed in the two World Wars.

In the USA it is a national holiday. It was first celebrated in 1621 by the Pilgrim Fathers after their first good harvest. Thanksgiving is a family day, for it is customary for all members of the family to gather at the home of their parents. The family eats a large traditional dinner, usually with turkey, cranberry sauce and pumpkin pie.

It is usually a one-day official holiday, but it is preceded and followed by festive parties, and marked by special church services, gift-giving and feasting. Christmas is a family holiday. Schools and colleges close between Christmas and New-Year's Day. People stay at home and spend the time with their families. Everybody tries to come home for Christmas.

People send cards or Christmas greetings to family and friends away from home. Every family tries to have a Christmas tree, which is beautifully decorated. Santa Claus comes from the North Pole in his sleigh, dressed in red cap and jacket, entering the house from chimney. He is a merry and fat individual. He has gifts of whatever kind you may wish for — nothing is too fabulous nor too trivial for him to provide.