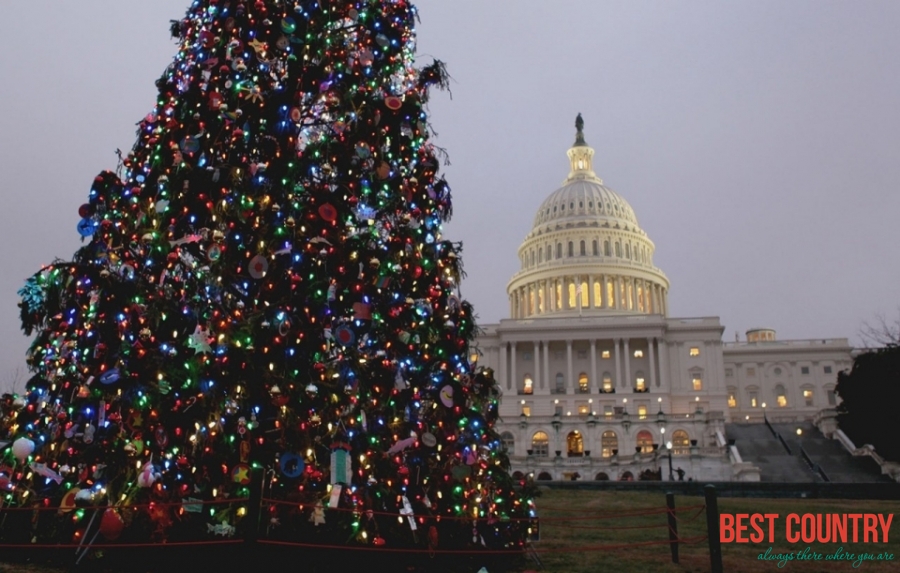 Many people in the United States celebrate Christmas Day on December 25. The day celebrates Jesus Christ's birth. It is often combined with customs from pre-Christian winter celebrations. Many people erect Christmas trees, decorate their homes, visit family or friends and exchange gifts.

People celebrate Christmas Day in many ways. In the days or even weeks before Christmas Day, many people decorate their homes and gardens with lights, Christmas trees and much more. It is common to organize a special meal, often consisting of turkey and a lot of other festive foods, for family or friends and exchange gifts with them.

Children, in particular, often receive a lot of gifts from their parents and other relatives and the mythical figure Santa Claus. This has led to Christmas Day becoming an increasingly commercialized holiday, with a lot of families spending a large part of their income on gifts and food.

Many Sunday schools, churches and communities organize special events. These can include decorating the neighborhood or a shopping mall, putting up a Christmas tree and planning a Nativity display, concert or performance. A lot of plays and songs have a aspect of Christmas as a theme. Some groups arrange meals, shelter or charitable projects for people without a home or with very little money.

Government offices, organizations, businesses and schools are closed, almost without exception. Many people visit relatives or friends and are out of town. This may cause congestion on highways and at airports. Public transit systems do not run on their regular schedules. In general, public life closes down completely.

The original meaning of Christmas is a special church service, or mass, to celebrate the birth of Christ. The story of the Nativity, or the events surrounding the birth of Jesus, are particularly important in religious celebrations of Christmas.

However, many traditions that are around today have their roots in pre-Christian winter festivals. These include the importance of candles and decorations made from evergreen bushes and tree, symbolizing everlasting light and life.

In Roman times, a mid-winter festival was held. This was a relaxing time with a lot of parties and merry making. It was also common to give other people small gifts, such as dolls for children and candles for adults.

This festival culminated with the celebration of the winter solstice, which fell on December 25 in the Roman calendar. In Scandinavia, a festival called Yule and lasting up to twelve days was held in late December and early January. In this time people burnt logs and held parties. These customs have influences how Christmas Day is celebrated today in the United States.

The Bible does not give a precise date for the birth of Jesus. It is also unclear when December 25 became associated with the birth of Jesus, although it may have been around two hundred years after his birth.

In the early centuries of Christianity, the anniversary of the birth of Jesus was not a cause for celebrations. The idea of turning this day into a celebration started in the early Middle Ages in Europe.

During Reformation and up until the middle of the 1800s, Christmas was often not celebrated because partying and merry making was seen as unchristian. From about 1840, celebrating Christmas became more widespread. December 25 was declared a federal holiday in the United States in 1870. Since then Christmas Day has become a steadily more important holiday.

A wide range of people and objects represent Christmas. These include baby Jesus, the Nativity and the Three Kings, but also Santa Claus, reindeer and elves. Common objects at this time of year are pine trees, holly, decorations, fairy lights, candles and presents. Christmas Day is now truly a mix of religious celebration and commercial interests.