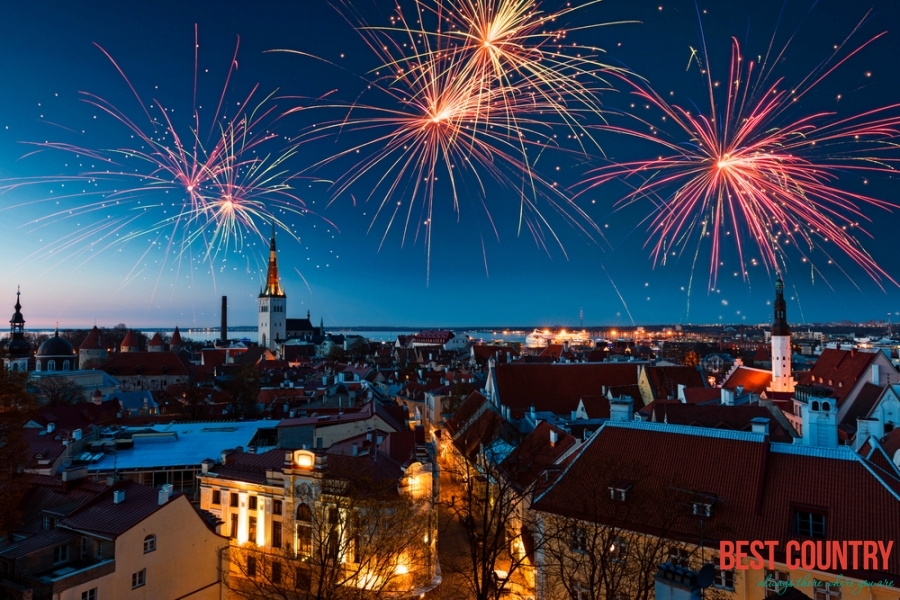 Estonia celebrates New Year on the date of January 1, according to Georgian calendar.

In Estonia, there is one different way with which New Year is welcomed and New Year celebrations are made.

However, in the bottom-line of everything, like every other place, people do put in long days of planning and efforts to come out with the best of whatever they do, to ensure a grand farewell to the past time, and splendid welcome to the coming time.

People, irrespective of their age and gender, can be found standing in concord to have gala celebrations on New Year’s Eve.

Other than being a part of social parties organized all over Estonia, people rummage around shops, markets, and malls for getting best products for their household, as well as buying for the purpose of gift.

With some heading to the local markets, some other goes to the extent of visiting far off places.

Tallinn and the seacoast city of Estonia are the most preferred places to visit during New Year’s time.

New Year’s Eve in Estonia is that part of the year, when people prefer to spend quality time with friends, relatives, and members of the family, while cheering and enjoying the moment of the arrival of the New Year.

Some other goes out to be a part of social celebrations and parties organized at number of party places, clubs, and discotheques, where party music is played on high notes, and is equally supported by the exulting dance moves.

Most of these parties are well hosted with the arrangements of the best food and finest liquor in place. Some of them even go beyond that to plan a moderate fireworks show at the stroke of midnight.

Apart from parties, number of live shows in the form of music concerts, acrobat performances, theatre plays, and theatre shows are also organized, and well accepted by the natives as well as visitors from outside.

The Estonia Concert Hall is the biggest stage set on New Year’s Eve, with various cultural oriented shows being organized in the evening reflecting the culture and heritage of Estonia.

Therefore, anyone with a plan to arrive on them on New Year’s Eve need to act fast, and book a ticket for oneself without any delay.

Estonia is a beautiful nation. Apart from its capital city of Tallinn, there are few other cities such as Tartu and Narva, which are prominently known for their beauty, architecture, as well as their depiction of the heritage and culture of Estonia.

New Year celebrations as made in these exquisite places, certainly end up providing a unique and memorable experience to all those coming and participating in it.

The capital city of Tallinn during the time of New Year’s Eve turns into a winter dreamland.

With the beautiful architecture covered up with snow on its peaks, the spirit of festival and celebration all around in the hearts of people and the beautiful decorations of the entire streets with colorful lights do make it look like a dreamland.

There is no doubt over the fact that it draws maximum number of tourists in the country during the time of New Year’s Eve.