What to Drink in Estonia

Part of the fun of travelling is trying to local cuisine, or perhaps more importantly, the drinks. Given Estonia’s drinking culture, there is no shortage of options for developing a hangover. If you’d like us to guide you towards some of the better choices in person, why not try our View with a Brew walking tour of Tallinn. Otherwise, here is a brief summary of the ways you may like to enjoy a tipple, Estonian style. 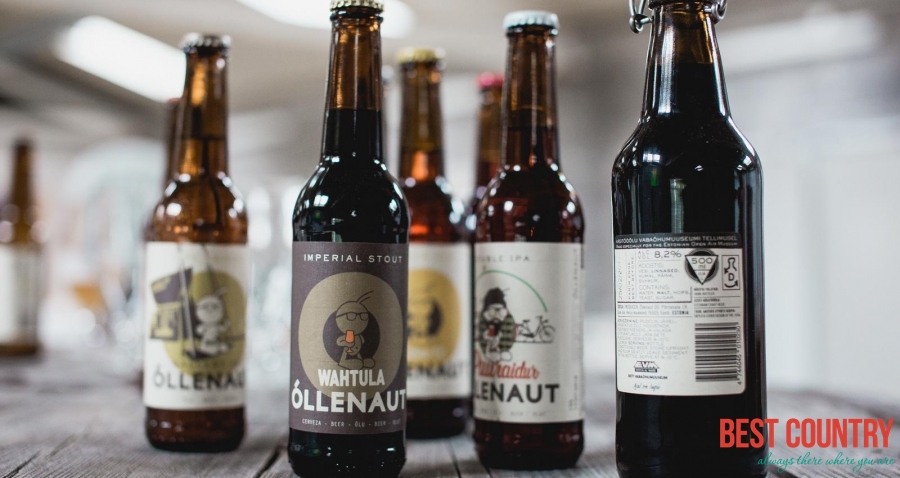 Most people will usually want to try an Estonian beer, and while there are lots on offer, two main breweries dominate the market.

Saku, Estonia’s biggest brewer, was established as the brewery of Saku Manor. You will easily find Saku Originaal (make sure to double the vowel sound when ordering!) on tap in pubs and bars.

Saku Kuld (Gold) is pitched as a premium beer, and well worth a try. However both of these are fairly standard lager style beers.

For real beer connoisseurs, we here at EstAdventures recommend Saku Tume (Dark) or if you can locate is Saku Abbey. You may wish to visit the Saku Brewery on an EstAdventures tour.

Traditionally Saku has dominated in Northern estonia, whereas A. Le Coq has been the choice of southern Estonians.

Although it sounds French it is actually from the town of Tartu, and if you come to Tallinn to see a game of football you will probably do so at A. Le Coq Arena. The most common brand is A. Le Coq Premium, but we prefer one called Alexander. In winter we are particularly partial to A. Le Coq Porter.

Not for the faint hearted, Estonian Liqueurs are well worth a try. You can’t say you’ve been to Tallinn until you’ve drunk Vana Tallinn (Old Tallinn).

It is available in 40%, 45% and 50% varieties, but if that scares you perhaps you may like to try the cream variety.

Kiiu Torn (Kiiu Tower) tastes something like Baileys, and is produced in the small town of Kiiu about 25 minutes East of Tallinn. You can visit Kiiu Tower and sample the liqueur on EstAdventure’s Lahemaa National Park Tour

Pirita is another local liqueur, which has a bottle adorned by the ruins of the Pirita convent. A true experience can be to drink Pirita at the Pirita Convent ruins, Vana Tallinn in Old Tallinn, and Kiiu Torn in Kiiu Tower!

While they may not drink us much as Russians, Estonians certainly love Vodka. Vodka is used to cure just about every ailment. For example at the onset of a cold, an old Estonian folk remedy is to soak your socks in Vodka and then put them on your feet. Even today Estonians swear by “Vodka Socks”.

The best known brand is Viru Valge, and we at EstAdventures are quite fond of the flavoured varieties, even if Vodka does make us act a bit silly at times.

Saremaa Vodka is also well regarded. For a real treat seek out The Tall Blonde, labelled as the Queen of Vodkas. Traditionally it has only been available outside of Estonia, though there are now a select number of places where it is available locally.

If you are very brave go to Valli Baar in the Old Town and ask for a Milli Malikas. I will say no more about it, you just need to experience this bar, and it’s speciality drink for yourself. Don’y say we didn’t warn you!