Port Vila is the capital of Vanuatu 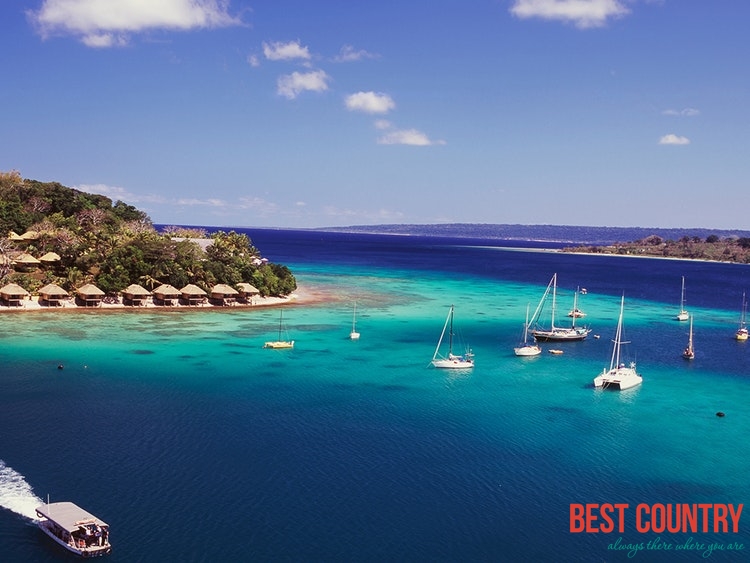 Port Vila /ˌpɔərt ˈviːlə/ is the capital and largest city of Vanuatu and is located on the island of Efate.

Situated on the south coast of the island of Efate, in Shefa Province, Port Vila is the economic and commercial centre of Vanuatu. The current mayor is Ulrich Sumptoh, of the Union of Moderate Parties, elected in January 2014; his deputy is Leimara Malachi, of the Vanua'aku Pati.

The area occupied by Port Vila has been inhabited by Melanesian people for thousands of years. In Autumn of 2004, an archaeological expedition known as Teouma discovered a burial site of 25 tombs containing three dozen skeletons of members of the Lapita culture. Pieces of ceramics found at the site were dated to the 13th century BC.

In May of 1606, the first Europeans arrived at the island, led by the Portuguese explorers Pedro Fernandes de Queir&#243;s and Luis Vaz de Torres. In the 19th century when the islands were known as the New Hebrides, the British possessed economic control of the zone, though by the end of 1880, the economic balance began to favour the French; this transition can be seen in its nickel mines of New Caledonia and plantations.

French citizen Ferdinand Chevillard began buying and clearing land around Port Vila to be converted into the largest French plantation on the island. Instead, it was converted into the municipality of Franceville, which declared independence on August 9, 1889, though this only lasted until June of the following year.

It was the first self-governing nation to practise universal suffrage without distinction of sex or race. Although the population at the time consisted of about 500 native islanders and fewer than fifty whites, only the latter were permitted to hold office. One of the elected presidents was a US citizen by birth, R. D. Polk, a relative of American president James K. Polk.

After 1887, the territory was jointly administered by the French and the British. This was formalized in 1906 as an Anglo-French Condominium. During World War II, Port Vila was an American and Australian airbase.

In 1987, Cyclone Uma severely damaged the city. A powerful earthquake in January 2002 caused extensive damage in the capital and surrounding areas. The city suffered a direct hit and massive damage from category 5 Severe Tropical Cyclone Pam in March 2015.

Port Vila is Vanuatu's most important harbour and the centre of the country's trade. The international airport, Bauerfield International (VLI) is also located in the city. Air Vanuatu has its head office in Vanuatu House in Port Vila.

Major industries in the city remain agriculture and fishing. Tourism is also becoming important, especially from Australia and New Zealand. There were over 50,000 visitors in 1997.

Vanuatu is a tax haven, and offshore financing in Port Vila is an important part of the economy.

Vanuatu is still dependent on foreign aid, most of which comes from Australia and New Zealand, although in recent years aid has also come from the People's Republic of China. Examples of aid have been New Zealand paying to train doctors selected from the local community, then paying part of their wages during the first year after qualification. Australia has paid consultants to work in Port Vila Central Hospital.

The population is around 45,000; predominately Melanesian, with small Polynesian, Asian, Australian and European populations, mainly French and British.

Bislama is spoken by everyone as the day-to-day language. In addition, English and French are also widespread. Other Indigenous languages are also spoken in the city.

Christianity is the predominant religion across Vanuatu, followed by more than 90% of the population. The largest denomination is the Presbyterian Church in Vanuatu, followed by one third of the population. Roman Catholicism and the Church of Melanesia are also common, each about 15%. Cath&#233;drale du Sacr&#233;-Coeur is a modern Roman Catholic cathedral in Port Vila. The seat of the Diocese of Port Vila,the church is dedicated to the Sacred Heart of Jesus.

Port Vila has a tropical climate, with a dry season and a hot, wet season. Rainfall averages about 2,360 millimetres (94 in.) per year, and the wettest month is April. The driest month is September. There are 113 wet days in an average year. The area also has south-east trade winds. Temperatures do not vary very much at all throughout the year, and the record high is 34 C (93.2 F).

The capital of Vanuatu has various sights to offer. There are several memorials, e.g. opposite the Parliament where two traditional totem poles and a monument representing a pig's tusk can be seen.

The Presbyterian Church of Port Vila is an impressive and sightworthy building opposite the Independence Park. A colourful wall painting can be seen on the administration building opposite the market hall. Another noteworthy wall painting is on the fa&#231;ade of the post office. The City Hall of Port Vila is an oblong and sightworthy building on a hill in the city centre.

The Vanuatu Cultural Centre, hosting the Vanuatu National Museum, is located at the Saralana Park in front of the national parliament, close to the National Library and the Malvatumauri (Vanuatu National Council of Chiefs).

This institution is an important place for the preservation and promotion of the different aspects of the local culture. Traditional artifacts from several islands are on display in the museum. The centre host also the National Audiovisual Archives which is the most important fund of documents from the late 19th century until today.

The municipality of Port Vila is divided into four wards and administered by a council consisting of 14 members.

The four wards are:

Malapoa-Tagabe and South are allotted three representatives each to the council while Anabrou-Melcofe-Tassiriki and Centre have four.

Port Vila is one location of the University of the South Pacific, an educational institution co-owned by twelve Pacific countries. The Vanuatu campus is the only law school in the university, and it also teaches languages.

Port Vila was the location in August 1999 for the important UNESCO meeting ”2nd World Heritage Global Strategy Meeting for the Pacific Islands Region”. One of the major topics with reference to Vanuatu and the Pacific region was the question of the suitability of underwater heritage for inscription on the World Heritage List.