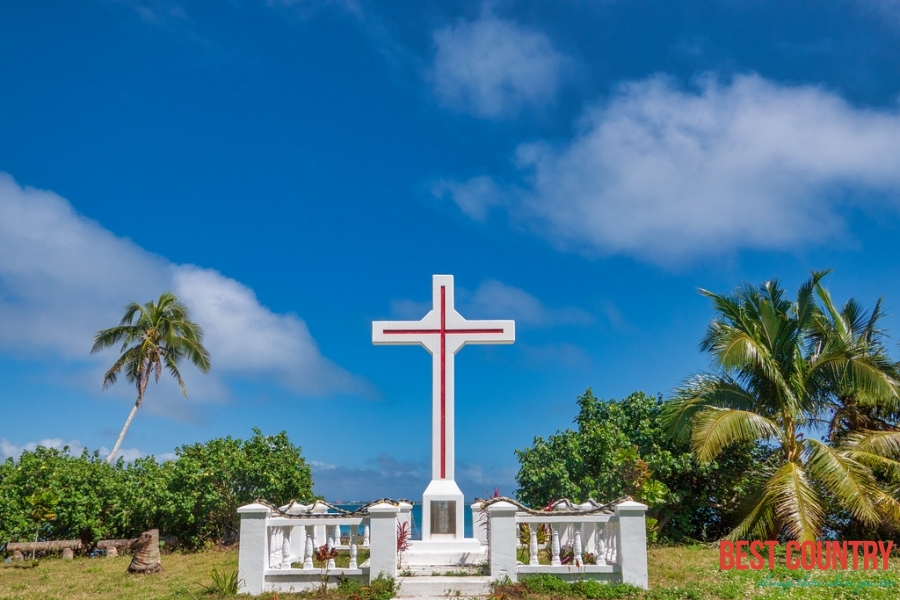 The king and the majority of the royal family are members of the Free Wesleyan Church (Methodist) which claims some 40,000 adherents in the country. There are four other Methodist denominations in the country. The Roman Catholic Church and The Church of Jesus Christ of Latter-day Saints each have a strong presence in the country as well. Tonga also has members of the Seventh-day Adventist Church, Anglicans, adherents of the Bah Faith, Hinduism, Buddhism and Muslims.

Tongans are ardent church goers. Church service usually follows a call and response structure. Singing in the church is often done a cappella. Although a church attends primarily to the spiritual needs of the population, it also functions as the primary social hub. As consequence people who go to a church of another denomination are absolutely not shunned.

Sunday in Tonga is celebrated as a strict sabbath, enshrined so in the constitution, and despite some voices to the opposite, the Sunday ban is not likely to be abolished soon. No trade is allowed on Sunday, except essential services, after special approval by the minister of police. Those that break the law risk a fine or imprisonment.

However, both Roman Catholics and Mormons state that the number of their adherents is higher than reported, and a 2006 survey conducted by the Free Wesleyan Church revealed its membership comprised only 35 percent of the population.[1] The Tokaikolo Church (a local offshoot of the Methodist Church), Seventh-day Adventists, Assemblies of God, Anglicans are also present.

Other than Christian denominations the next largest religion is of the Baha'i Faith.[2] Hinduism and Buddhism have begun to gain traction, growing from 0.2% to 0.4% of the population(or 175 to 383 combined) in five years. Meanwhile, Islam has shrunk to 24 people, from its peak of 47.

However, according to 2011 census, only 18.01% of Tongans belong to LDS Church and Tongans belonging to mainstream Christian denominations represent majority of the population.

The Bah Faith in Tonga started after being set as a goal to introduce the religion in 1953, and Bahs arrived in 1954. With conversions and pioneers the first Bah; Local Spiritual Assembly was elected in 1958.

Less than forty years later, in 1996, the Bahs of Tonga established their paramount Bah school in the form of the Ocean of Light International School.

Around 2004 there were 29 local spiritual assemblies and about 5% of the national population were members of the Bah; Faith though the Tonga Broadcasting Commission maintained a policy that does not allow discussions by members of the Bah Faith of its founder, Bah on its radio broadcasts.

Foreign missionaries are active in the country and operate freely. The Constitution of Tonga provides for freedom of religion, and the government generally respected this right in practice.

The US government found that there were no reports of societal abuses or discrimination based on religious belief or practice in 2007.