Religion and Beliefs in Malaysia 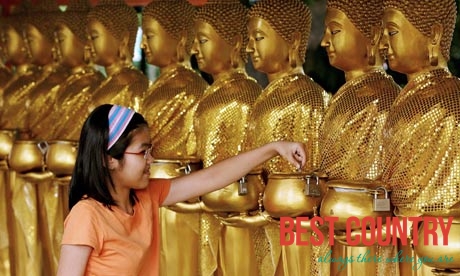 Malaysia is a multicultural society with Islam as the dominant religion, whose followers make up 61 per cent of the population, but the constitution guarantees religious freedom for many other faiths.

Although the country has a secular constitution, debate continues about whether Malaysia should be a secular or Islamic state, with politics often becoming entwined with religion.

Relations between different religious groups are harmonious and tolerant. Christmas, Chinese New Year and Deepavali have all been declared national holidays alongside Islamic holidays.

Various groups have been set up to try and promote religious understanding among the different groups, with religious harmony seen as a priority by Malaysian politicians. However, it is illegal to convert Muslims to other religions.

The government promotes a moderate form of Islam known as Islam Hadhari. Any teaching which deviates from the official Sunni code is illegal, and no other forms of Islam are allowed.

The country has both civil and Shariah courts, with all Muslims having to follow Shariah law, which is enforced by the government and police forces.

The large Chinese population practices a mixture of beliefs, with influences from traditional religions followed in China such as Buddhism and Daoism. Hinduism is followed by the majority of Malaysian Indians.

Christianity has established itself in some communities, especially in East Malaysia but it is not tied to any specific ethnic group. Other religions, such as the Baha’I Faith and Sikhism also have adherents in Malaysia.

Most Malaysian Chinese follow a combination of Buddhism, Confucianism and ancestor-worship, but when pressed to specify their religion will identify themselves as Buddhists and will list themselves as such for bureaucratic purposes.

The indigenous tribes of East Malaysia have mostly converted to Christianity, although Christianity has made fewer inroads into Peninsular Malaysia.

Islam is thought to have been brought to Malaysia around the 13th century by Indian traders. In the early 15th century, the Malacca Sultanate – considered the first independent state on the peninsula – was founded and led by a Muslim prince, the influence of Malacca led to the spread of Islam throughout the Malay population.

Islam is generally practiced liberally, although in the last 20 years strict adherence to Islamic practice has increased. The Malaysian government promotes a moderate version of Islam which is meant to encourage a balanced approach to life and encourages inclusivity, tolerance and looking outwards.

The qualities it values are knowledge, hard work, honesty, good administration and efficiency.

Many Malaysian Chinese practice a mixture of Buddhism, Confucianism, and Daoism and for many Chinese people, religion is an essential part of their cultural life.

Around 19 per cent of the current population classify themselves as Buddhist and most Malaysian Chinese follow the Mahayana branch, whereas Thai and Sinhalese minorities in Malaysia follow the Therevada branch.

The majority of the Tamil population of Malaysia practice Hinduism. Current adherents are mostly descended from migrant communities from Tamil Nadu who came to Malaya to work on British rubber plantations.

The Sikh community in Malaysia owes its beginnings in the country to the British connection and in particular with the recruitment of Sikhs for the paramilitary and police units which formed the nucleus from which the modern police and military forces of the nation derived.

The first of these units was the Perak Sikhs. The Sikhs believe and worship the one and only God who is formless. Hence, idol worship is denounced by the Sikh scriptures. The Sikhs’ place of worship is known as a Gurdwara which is open to all irrespective of race, religion, colour or sex.

Early international trade played a key role in bringing Christianity to Malaysia. Some Persian traders were Nestorian Christians. Later, in the era of the middle ages, Catholic diplomats, travellers and priests travelled through the Straits enroute to China.

Among the traders residing in Melaka during the Melaka Sultanate in the 15th century were Nestorians and also Armenian Christians from what is today Eastern Turkey. Churches were established in the area with the coming of the Portuguese in 1511, the Dutch in 1641 and the British in 1786.