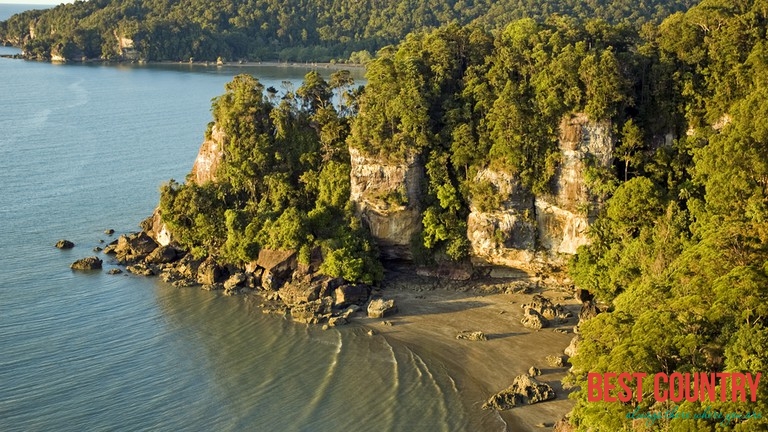 It is composed of Peninsular Malaysia and the states of Sabah and Sarawak on the north coast of the island of Borneo, 650 to 950km (404 to 600 miles) across the South China Sea.

Peninsular Malaysia is an area of forested mountain ranges running north-south, on either side of which are low-lying coastal plains. The coastline extends some 1,900km (1,200 miles).

The west coast consists of mangrove swamps and mudflats which separate into bays and inlets.

In the west, the plains have been cleared and cultivated, while the unsheltered east coast consists of tranquil beaches backed by dense jungle.

The major islands are Langkawi (a group of 99 islands), Penang and Pangkor off the west coast; and Tioman, Redang, Kapas, Perhentian and Rawa off the east coast.

In Malaysian Borneo, Sarawak has alluvial and, in places, swampy coastal plains with rivers penetrating the jungle-covered hills and mountains of the interior. Sabah has a narrow coastal plain which gives way to mountains and jungle. Mount Kinabalu, at 4,094m (13,432ft), is the highest peak in Malaysia.

The best time for beach holidays or scuba-diving will depend on which part of Malaysia you intend to visit. The country is affected by the south-west monsoon from May to September and the north-east monsoon from November to March, and different parts of the country have their dry and wet seasons at different times of year.

Kuala Lumpur is wettest from March to April and September to November, while Malaysian Borneo sees its heaviest rainfall between November and February.

The best time to visit for dry weather is June and July on the east coast, January and February on the west coast, April in Sabah and June to July in Sarawak.

Lightweight, loose-fitting clothes are sensible at any time of year. To avoid offending local sensibilities, female travellers should wear clothes that cover the legs and upper arms.

Note that shorts are rarely worn by adults, except at the beach. Full-length trousers will create a better impression. Because of the rainfall patterns and the vagaries of Malaysia weather, always carry an umbrella.