Under the Mughals, agricultural taxes were collected according to the Hijri calendar. 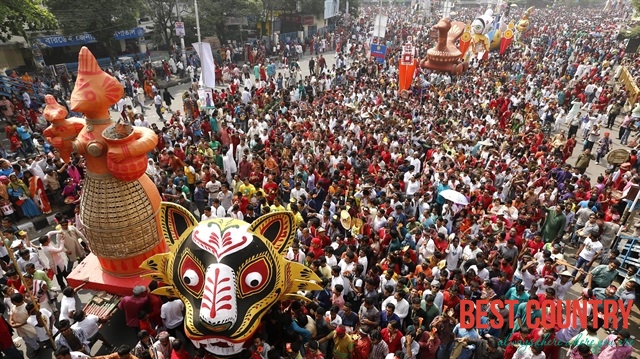 However, as the Hijri calendar is a lunar calendar, the agricultural year does not coincide with the fiscal.

As a result, farmers were hard-pressed to pay taxes out of season. In order to streamline tax collection, the Mughal Emperor akbar ordered a reform of the calendar.

Accordingly, Fatehullah Shirazi, a renowned scholar and astronomer, formulated the Bangla year on the basis of the lunar Hijri and Bangla solar calendars.

It was customary to clear up all dues on the last day of Chaitra. On the next day, or the first day of the new year, landlords would entertain their tenants with sweets. On this occasion there used to be fairs and other festivities.

In due course the occasion became part of domestic and social life, and turned into a day of merriment. The main event of the day was to open a halkhata or new book of accounts. This was wholly a financial affair.

In villages, towns and cities, traders and businessmen closed their old account books and opened new ones. They used to invite their customers to share sweets and renew their business relationship with them.

This tradition is still practised, especially by jewellers. New year's festivities are closely linked with rural life in Bengal.

Usually on the day everything is scrubbed and cleaned. People bathe early in the morning and dress in fine clothes and then go to visit relatives, friends and neighbours.

Special foods are prepared to entertain guests. Baishakhi fairs are arranged in many parts of the country.

Various agricultural products, traditional handicrafts, toys, cosmetics as well as various kinds of food and sweets. are sold at these fairs.

Narrative plays like laily-majnu, yusuf-zulekha and Radha-Krishna are staged. Among other attractions of these fairs are puppet shows and merry-go-rounds.

Kite flying in dhaka and bull racing in munshiganj used to be very colourful events.

Some festivals, however, continue to be observed, for example, bali or wrestling in Chittagong and gambhira in Rajshahi.

Observance of Pahela Baishakh has become popular in the cities. Early in the morning people gather under a big tree or on the bank of a lake to witness the sunrise. Artistes present songs to welcome the new year.

People from all walks of life wear traditional Bengali dresses: young women wear white sarees with red borders and adorn themselves with bangles, flowers, and tips.

A similar ceremony welcoming the new year is also held at the Institute of Fine Arts, university of dhaka.

Students and teachers of the institute take out a colourful procession and parade round the campus. Social and cultural organisations celebrate the day with cultural programmes. Newspapers bring out special supplements.

There are also special programmes on radio and television. The historical importance of Pahela Baishakh in the Bangladesh context may be dated from the observance of the day by Chhayanat in 1965.

In an attempt to suppress Bengali culture, the Pakistan Government had banned tagore songs.

The day continued to be celebrated in East Pakistan as a symbol of Bengali culture.

After 1972 it became a national festival, a symbol of the Bangladesh nationalist movement and an integral part of the people's cultural heritage.