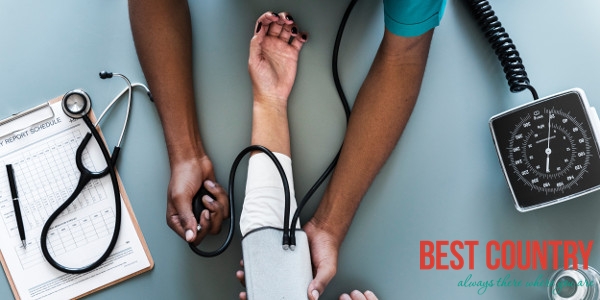 In the pre-genocide era before 1994, Rwanda's healthcare was supported by the Bamako Initiative which was sponsored by UNICEF and WHO and adopted by African ministers of health in 1987.

Progress was started towards decentralising the health management system, first to the Province level and then to the district level. Unfortunately this was disrupted by the 1994 genocide, which crippled the healthcare system alongside the economy.

In the post genocide period, Rwanda has had an uphill climb in the recovery of their health system as well as their economy. The decentralized multi-tiered system in Rwanda has four referral hospitals, which are Centre Hospitalier Universitaire de Kigali (CHUK), Centre Hospitalier Universitaire de Butare (CHUB), King Faisal Hospital (KFH) and the Kanombe Military Hospital.

It also has a number of dispensaries, 34 health posts which are mainly involved with the outpatient programmes such as immunizations and family planning services, a number of health centres estimated to be over 440, and 48 district hospitals.

This was with an average annual rate of reduction to 8.6 from 2000 to 2013.[8] Due to a variety of reasons such as poverty, poor roads due to the hilly terrain in the rural areas, misleading traditional beliefs and inadequate knowledge on pregnancy related issues, 31 percent of the women end up delivering at home despite having a public health insurance scheme.

Some of the solutions which have been sought to the challenges include the training of more community health workers (village health teams) to sensitize the community,on top of providing them with mobile phones to contact the health facilities in emergency situations such as heamorrhage. The number of ambulances to some of the rural health centres have also been increased.

According to a recent report by WHO most of the pregnant women die from hemorrhage (25%), hypertension (16%), abortion and sepsis (10% each) and a small number die from embolism (2%).

In terms of prevention of mother-to-child transmission of HIV,in 2010 the percentage of HIV and pregnant women receiving ante retrovirals drugs rose from 67% to 87% in 2012.

45 percent of women between the ages of 15 to 49, use family planning methods. This comes as no surprise as Rwanda women on average, give birth to 4.6 children throughout their lifetime (RDHS 2010).

In 1990,the percentage of children immunized against measles was roughly estimated to be 82% and by 2012 it had increased dramatically to 98% coverage of measles,3 doses of hepatitis B, 3 doses if pnuemoccal conjugatevaccine and 3 does of DTP.

Exclusive breast feeding rate increased to 85%.This can be explained by a number of factors such as increased awareness among the populations both rural and urban through education programmes as well as improved coverage of effective interventions. This has been significant in the prevention and treatment of the major causes of child mortality.