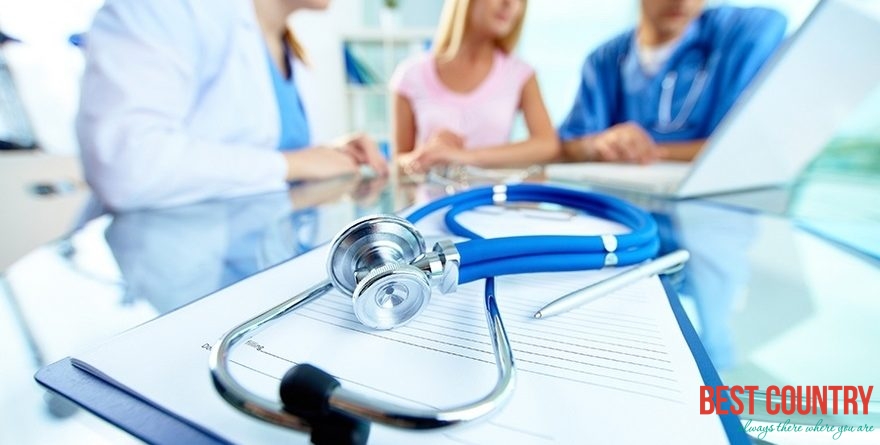 Namibia faces a number of challenges providing health care to its citizens. The country has a dual system of public (serving 85% of the population) and private (15%) health care providers. In the financial year 2006/07, Government and private health expenditure combined accounted for 8.3% of the country's Gross Domestic Product.

Namibia has 343 hospitals and clinics, as well as 1,150 smaller service points.

Health care facilities in the country are sophisticated but not always affordable to the poorer part of the population. Certain services like dialysis and organ transplantations are only available from private medical centres, putting them out of reach for the majority of Namibia's citizens. The situation got wide coverage in 2010 when Jackson Kaujeua, Namibian singer and liberation hero, died from renal failure after not being able to afford private medical care, and thus not being put on dialysis.

The capital Windhoek has cardiac theaters at two different hospitals, the Windhoek Central State Hospital and the Roman Catholic Hospital. Both units were opened in 2010 and 2011, respectively, and have been used to perform open-heart surgery, partly with the assistance of foreign personnel.

In 2004, the country had 598 physicians - 0.3 per 1,000 inhabitants, and 6,145 midwives and nurses - 3 per 1,000 inhabitants. This number is significantly larger than in the rest of Africa[5] and slightly exceeds the minimum density recommended by the World Health Organisation. The total numbers do not reflect that the private health care facilities are luxuriously staffed while there is a shortage in the public sector.

The 2014 CIA estimated average life expectancy in Namibia was 51.85 years.

Due to high prevalence of alcohol abuse, 8% of adult Namibians suffer from related illnesses. Alcohol consumption is increasing particularly in the north of the country (the four regions of Ohangwena, Omusati, Oshana, and Oshikoto).

Due to exposure to sunshine and prevalence of albinism, the most widespread cancer in Namibia is skin cancer, with 581 cases reported in 2010 and 417 cases in 2011. The second most prevalent cancer is Kaposi's sarcoma, a disease related to HIV/AIDS, with 251 reported cases in 2011.

There are occasional Cholera outbreaks in the north of the country, particularly in the Kunene Region.

The AIDS epidemic is a tremendous problem in Namibia. Approximately 13% of the adult population is infected with HIV, a rate only surpassed by its eastern neighbor, Botswana.

In 2001, there were an estimated 210,000 people living with HIV/AIDS, and the estimated death toll in 2003 was 16,000. The HIV/AIDS epidemic has reduced the number of working-class people and increased the number of orphaned children. It falls to the government to provide education, food, shelter and clothing for these orphans.

There is a small group of approximately 60 leprosy sufferers in the Kavango and Caprivi Region, most of them concentrated at Mashare, east of Rundu. Until the early 1980s this settlement contained a leprosarium of considerable size for thousands of patients from South-West Africa and its neighbours Angola and Botswana.

The malaria problem seems to be compounded by the AIDS epidemic. Research has shown that in Namibia the risk of contracting malaria is 14.5% greater if a person is also infected with HIV. The risk of death from malaria is also raised by approximately 50% with a concurrent HIV infection.

About a third of all children are stunted, which impacts on their overall development and health.

Namibia has a high rate of tuberculosis sufferers with approximately 0.7 cases reported per 1,000 inhabitants. Of particular concern are multi and extensively drug-resistant bacteria strains.