Weather and climate of Namibia 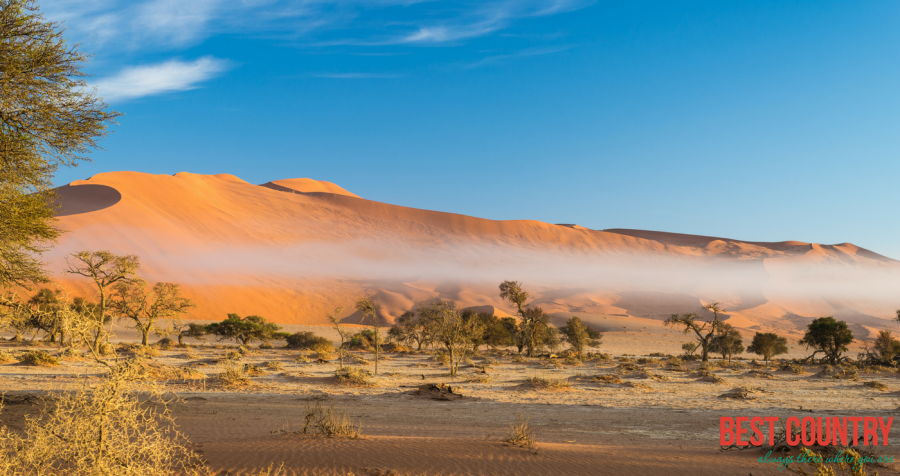 Namibia has more than 300 days of sunshine per year. It is situated at the southern edge of the tropics; the Tropic of Capricorn cuts the country about in half. The winter (June–August) is generally dry, both rainy seasons occur in summer, the small rainy season between September and November, the big one between February and April.

Humidity is low, and average rainfall varies from almost zero in the coastal desert to more than 600 mm in the Caprivi Strip. Rainfall is however highly variable, and droughts are common. The last bad rainy season occurred in summer 2006/07. Due to the dry winters snowfall has a very rare occurrence and prompts media coverage whenever it happens. The last snow was reported at Spreetshoogte Pass in the Namib-Naukluft Park in June 2011.

Weather and climate in the coastal area are dominated by the cold, north-flowing Benguela Current of the Atlantic Ocean which accounts for very low precipitation (50 mm per year or less), frequent dense fog, and overall lower temperatures than in the rest of the country.

In winter, occasionally a condition known as Berg wind or Oosweer (Afrikaans: East weather) occurs, a hot dry wind blowing from the inland to the coast. As the area behind the coast is a desert, these winds can develop into sand storms with sand deposits in the Atlantic Ocean visible on satellite images.

The Central Plateau and Kalahari areas have wide diurnal temperature ranges of up to 30C.

Efundja, the annual flooding of the northern parts of the country, often causes not only damage to infrastructure but loss of life. The rains that cause these floods originate in Angola, flow into Namibia's Cuvelai basin, and fill the Oshanas (Oshiwambo: flood plains) there. The worst floods so far occurred in March 2011 and displaced 21,000 people.