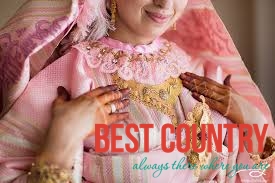 Libyan weddings are grand affairs. If finances permit, the wedding can last up to 5 days, but even in modest circumstances 3 days is the minimum.

The celebrations can be exhausting and many modern brides think 3 days is enough regardless of financial outlay. I was fortunate enough to be invited to a local wedding – day 1 of a large celebration. Weddings nowadays are rarely held in the home, and venues are rented for the occasion.

In this case the wedding party was held on the family’s estate just outside of Tripoli. Entering the hall, the brilliant spectacle of about 200 glamorous women bejeweled and clad in beautiful sparkly evening-wear was a tad unnerving to this traveler who was entirely unsuitably clad. It is customary in Libya to have large weddings, and family, friends and neighbors are all invited, but it is not mandatory to attend every night of the wedding.

On this particular night the bride, in contrast to the other women, was not wearing make-up which is the tradition for this day only. She wore a traditional pink-striped voluminous dress, folded up into cushion-like forms at the back and hips, and had a matching kerchief tied up on top of her head.

Guests were served a traditional dish called rishda, a vermicelli pasta in a spicy tomato-based sauce, served with lamb or chicken. From then on, servers patrolled the hall with giant platters of cakes, cookies, baklava, ice cream, mint tea and soft drinks throughout the night.

A four-piece live band of female musicians played (amplified) Arabic music all night long – certain songs saw lots of women of all ages up on the floor, tying belts around their hips and shimmying away in a Libyan-style belly dance. I too took to the floor and danced with the bride and the rest - it was like being in the disco again - the only thing missing was the pile of handbags in the middle of the circle!

Seeing the little girls dance was something to behold – dashing on to the floor as soon as they liked the beat, they’d shake and shimmy their slender forms and non-existent hips like pros. One little girl in particular who had very long hair had her own style – bending over from the waist, she’d shake out her hair then toss her head in fast circles first to one side and then the other so that her hair became a whirling halo.

There are no men at these affairs. The celebrations are almost entirely separate, even today. Also in contrast to our weddings, here they are held at night. We arrived at 1100 at night, and left at 0230 in the morning, it was a Tuesday night and people were going to work as normal the next day. The summer months are generally the season for weddings and parties but they do occur throughout the year. One wonders where they get the stamina…. The day I attended is called hafla.

The following day was nejma, meaning star, when the bride gets hennaed up. The star bit refers to the bride going out into the street at night holding a mirror in front of her to ‘catch the star’. It is a procession in which the bride’s friends, neighbors and family members take part, although several women who were describing the wedding celebrations to me told me they had not done this, and this part of the tradition may be dying off.

A child walks in front of her holding a tray with candles for light, eggs for fertility and a knife to keep away the evil eye. In Ottoman times I am told a black eunuch would walk entirely naked in the street at the same time, in order to deflect unwanted attention away from the bride...….perhaps if they re-introduced this part of the custom it might revive it? Just a thought...

When this is done, henna is applied. This is far more elaborate than I had understood. A tray with the ritual henna and associated implements is placed in front of the bride. Sometimes a family member will apply the henna but if they are not skilled, a professional is called upon to do it.

The parts of the body which are not going to be hennaed are covered with string – either it is wound round the lower parts of a finger for example leaving the upper parts free, or in olden times to obtain the patterns on hands and feet, the string would be fashioned into different shapes and laid across the appropriate part of the body. (Now they have stencils.)

The henna is not painted on but is thickly applied in a paste over the hand, arm or foot, and then bound with cloth to keep it warm to speed up the activation process. Formerly, straw was used for its warming properties. Thus bound and pasted the bride passes the time with her friends – feet and arms aloft. The process can take either a few hours or all night depending on the desired depth of color. The longer it is left on, the deeper the red.

The third day is called Goufah when the groom’s family invites family and friends to bring gifts to the bride. The bride usually wears the white dress on this day. This is also the day of the rajala, or men’s lunch, when they get together and eat couscous.

The 4th day is called Dokhla and the woman has a party in her home before the groom comes to pick her up to take her to his house. This usually takes place on a Thursday and if you have ever been to a Middle Eastern country and seen (and heard) crowds of people in their cars in a procession at night – all honking and shouting – this is what they are celebrating, the bride going to the groom’s house.

As this is the first night they spend together, it is met with much teasing and banter. Inside the groom’s house, family members will greet them, some reciting prayers from the Koran sometimes to the accompaniment of music.

The following day is called sabahiyya – or morning after. A large breakfast is given and on this occasion the bride may change costume as many as 4 times, she will also be given a ritual spoonful of sugar to taste from all family members – (this is an old ritual to keep relations ‘sweet’ between them). Couples go on honeymoon on this day just as we do.

Wedding customs change from area to area across the country and a wedding in Benghazi will not be the same as a wedding in Tripoli for example, although there will be some similarities. Although there was a female video photographer recording the event, the video will only be shown to women and to immediate male family members. In respect of local custom therefore, there are no photographs to accompany this post. You will have to visit Libya and hopefully be invited to a wedding yourself.