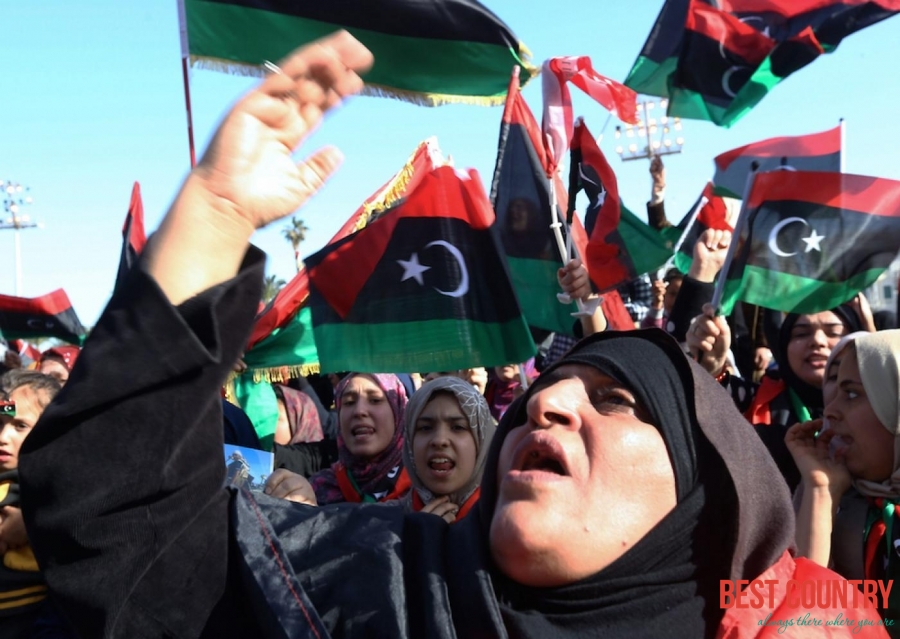 Sunni Islam of Maliki school of jurisprudence is the dominant religion in Libya. Other than the overwhelming majority of Sunni Muslims, there are also small Christian communities, composed exclusively of foreigners. Coptic Orthodox Christianity, which is the Christian Church of Egypt, is the largest and most historical Christian denomination in Libya.

There are over 60,000 Egyptian Copts in Libya, as they comprise over 1% of the population alone. There are an estimated 40,000 Roman Catholics in Libya who are served by two Bishops, one in Tripoli (serving the Italian community) and one in Benghazi (serving the Maltese community). There is also a small Anglican community, made up mostly of African immigrant workers in Tripoli; it is part of the Anglican Diocese of Egypt.

Libya was until recent times the home of one of the oldest Jewish communities in the world, dating back to at least 300 BC.[3] A series of pogroms beginning in November 1945 lasted for almost three years, drastically reducing Libya's Jewish population. In 1948, about 38,000 Jews remained in the country. When the Arab-Israeli conflict began, the Jewish population in Libya were either forced out to leave country or persecuted. Upon Libya's independence in 1951, most of the Jewish community emigrated.

During the seventh century, Muslim conquerors reached Libya, and by the eighth century most of the resistance mounted by the indigenous Berbers had ended. The urban centers soon became substantially Islamic, but widespread conversion of the nomads of the desert did not come until after large-scale invasions in the eleventh century by Bedouin tribes from Arabia and Egypt.

A residue of pre-Islamic beliefs blended with the pure Islam of the Arabs. Hence, popular Islam became an overlay of Qur'anic ritual and principles upon the vestiges of earlier beliefs—prevalent throughout North Africa—in jinns (spirits), the evil eye, rites to ensure good fortune, and cult veneration of local saints. The educated of the cities and towns served as the primary bearers and guardians of the more austere brand of orthodox Islam.

Before the 1930s, the Sanusi Movement was the primary Islamic movement in Libya. This was a religious revival adapted to desert life. Its zawaayaa (lodges) were found in Tripolitania and Fezzan, but Sanusi influence was strongest in Cyrenaica. Rescuing the region from unrest " was very conservative and somewhat different from the Islam that exists in Libya today. A Libyan form of Sufism is also common in parts of the country.

Christianity is a minority religion in Libya. The largest Christian group in Libya is the Coptic Orthodox made up entirely of Egyptian immigrant workers, with a population of over 60,000. The Coptic (Egyptian) Church is known to have several historical roots in Libya long before the Arabs advanced westward from Egypt into Libya. However, the Roman Catholics have a large number as well, with 40,000 members.

Orthodox communities other than that of the Egyptian Copts include the Russian Orthodox], Serbian Orthodox, and the Greek Orthodox[citation needed].

There is one Anglican congregation in Tripoli, made up mostly of African immigrant workers in Tripoli and which belongs to the Egyptian Anglican diocese. The Anglican bishop of Libya has his see in Cairo, as most Christians in Libya originate from Egypt, including the Copts. There are relatively peaceful relations between Christians and Muslims in Libya.

Jews had a presence in Libya at least since the time of Hellenistic rule under Ptolemy Lagos in 323 BC in Cyrene. Once home to a very large and thriving Jewish community, Libya is now completely empty of Jews due to anti-Jewish pogroms and immigration to Israel.

During World War II, Libya's Jewish population was subjected to anti-Semitic laws by the Fascist Italian regime and deportations by German troops. After the war, anti-Jewish violence caused many Jews to leave the country usually for Israel. A savage pogrom in Tripoli on 5 November 1945, killed more than 140 Jews and wounded hundreds more. Almost every synagogue was looted. In June 1948, when there was a recorded 38,000 Jews in Libya, rioters murdered another 12 Jews and destroyed 280 Jewish homes.

Thousands of Jews fled the country after Libya was granted independence and membership in the Arab League in 1951. After the Six-Day War, the Jewish population of 7,000 was again subjected to pogroms in which 18 were killed, and many more injured, sparking a near-total exodus that left fewer than 100 Jews in Libya.

Under former ruler Colonel Muammar Gaddafi, the situation became a lot worse, as all Jewish property was confiscated and all debts to Jews cancelled. In 1999, the synagogue in Tripoli was renovated, however, it was not reopened.

The last Jew living in Libya, Esmeralda Meghnagi, died in February 2002. This marked the end of one of the world's oldest Jewish communities, which traced its origins to the 4th century BC.

With 0.3% of its population identifying as Buddhist, Libya has the largest proportion of Buddhists of any North African country. Many Buddhists are immigrants from Asia. However, there are no Buddhist pagodas or temples in Libya.