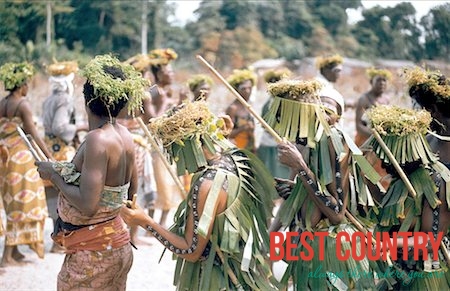 As a predominantly Christian nation, religious celebrations are widely observed throughout Gabon, along with other traditions involving faith like Ramadan.

Christmas and New Year’s are two of the most widely-anticipated events in the country, marked by great festivities, colorful traditions, musical programs, extravagant parties, festive buffets, street marches, and general merriment. In addition to these holidays, cultural festivities are also a great excuse for a party. The Gabonese hold their lifestyle in high regard, evident in festivals that are based on music and the arts.

The country celebrates important holidays that commemorate historical events and other secular and religious dates, when everyone takes a break from school and work. You may choose to travel during or around these dates, either to join in the festivities or avoid the crowds. Outside of national dates, exciting festivals are held to celebrate different facets of Gabonese culture. These include Les Nuits Atypiques de Mighoma, Festival Akini-a-loubou and the Gabao Hip Hop Festival.

Celebrated in the Gabon-Estuaire region and the capital of Libreville on February 25, this music festival is organized by the cultural group Afrik’Aktion, which also has a presence in neighboring countries like Cameroon, Congo, DRC, Chad, the Central African Republic, and The Republic of Guinea. The event attracts an impressive roster of international hip hop artists to perform.

Also celebrated in Libreville from May 9 to 14, Festival Akini-a-loubou is two weeks of contemporary dance. It attracts performers from all over Africa including Benin, Chad, Burkina Faso, Cameroon, Congo Brazzaville, France, and Gabon. Participants conduct various creative workshops at the French Arts Center.

This national holiday on March 12 is held in honor of the founding of the PDG in 1968. Today, Gabon has a multiparty political system, but up until 1990, the PDG was the sole legal entity.

Celebrations on this day mark Gabon’s independence from France on August 17, 1960. While main parades and events are held the day-of, the days before and after also typically see parties marking an end to the country’s century of domination.

This music festival is held in Mighoma, usually on the last week of August. It celebrates traditional music from the Nyanga region showcasing vocal performances, classic and modern instruments, rituals, and many other presentations of sound.