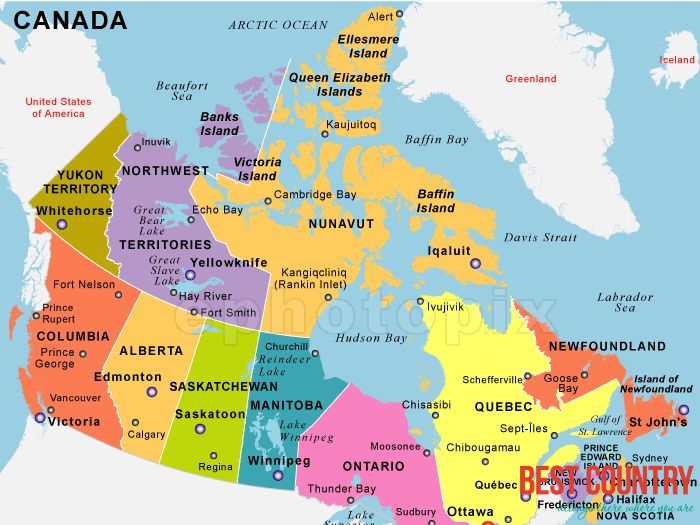 The geography of Canada is vast and diverse. Occupying most of the northern portion of North America (41% of the continent), Canada is the world's second largest country in total area.

The northernmost settlement in Canada (and in the world) is Canadian Forces Station (CFS) Alert (just north of Alert, Nunavut) on the northern tip of Ellesmere Island—latitude 82.5°N—just 834 kilometres (518 mi) from the North Pole.

The magnetic North Pole lies within the Canadian Arctic territorial claim; however, recent measurements indicate it is moving towards Siberia.

Canada is divided into ten provinces and three territories. According to Statistics Canada, 72.0% of the population is concentrated within 150 kilometres (93 mi) of the nation's southern border with the United States, 70.0% live south of the 49th parallel, and over 60% of the population lives along the Great Lakes and St. Lawrence River between Windsor, Ontario and Quebec City. This leaves the vast majority of Canada's territory as sparsely populated wilderness; Canada's population density is 3.5 people/km2 (9.1/mi2), among the lowest in the world. Despite this, 79.7% of Canada's population resides in urban areas, where population densities are increasing.

Canada shares with the U.S. the world's longest undefended border at 8,893 kilometres (5,526 mi); 2,477 kilometres (1,539 mi) are with Alaska. The Danish island dependency of Greenland lies to Canada's northeast, separated from the Canadian Arctic islands by Baffin Bay and Davis Strait. The French islands of Saint-Pierre and Miquelon lie off the southern coast of Newfoundland in the Gulf of St. Lawrence and have a maritime territorial enclave within Canada's Exclusive Economic Zone. Canada also shares a land border with Denmark, as maps released in December 2006 show that the agreed upon boundaries run through the middle of Hans Island.

Canada's geographic proximity to the United States has historically bound the two countries together in the political world as well. Canada's position between the Soviet Union (now Russia) and the U.S. was strategically important during the Cold War since the route over the North Pole and Canada was the fastest route by air between the two countries and the most direct route for intercontinental ballistic missiles. Since the end of the Cold War, there has been growing speculation that Canada's Arctic maritime claims may become increasingly important if global warming melts the ice enough to open the Northwest Passage.

Similarly, the disputed—and tiny—Hans Island (with Denmark), in the Nares Strait between Ellesmere Island and northern Greenland, may be a flashpoint for challenges to overall claims of Canadian sovereignty in The North.