Ottawa is the capital of Canada 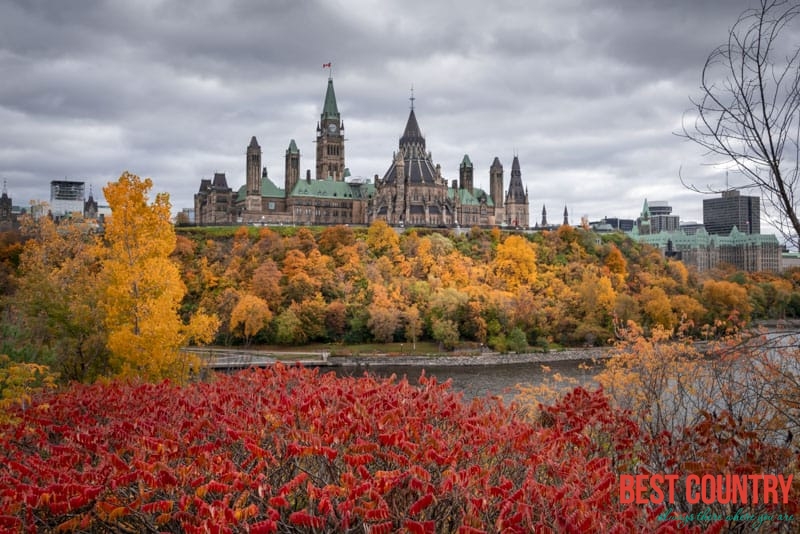 Ottawa is the capital of Canada and the fourth-largest in the country. Located in the Ottawa Valley, the city is at the southeastern tip of the state of Ontario and is on the border of the province of Québec.

The closest major city to Ottawa is Gatineau, which lies just across the Ottawa River in the province of Quebec. These two cities, although in different provinces, together make up Canada’s National Capital Region. It is considered a single metropolitan area and is surrounded by a substantial greenbelt.

The drastic differences in temperature year round can have a great impact on the experience of the city. The months from late June to early September are considered the best times for tourists to visit the city if they are interested in warm weather activities. The winter months see regular snow and ice accumulation, and Ottawa is the seventh-coldest capital city in the world.

One benefit to the cold winters in Ottawa is that the Rideau Canal regularly freezes over. Given the central location of the canal in the city, this creates the world’s largest ice skating rink. It’s 7.8 km (4.8 miles) long and covers the same area as 90 Olympic sized skating rinks.

Although the economy of Ottawa was largely connected to the timber industry in the earlier days of its history, the industries generating the most money in the capital city are now the high-tech sector and governmental jobs. The largest employer in the city is the federal government, which employs more than 100,000 people in the region. This is in part because many federal departments have their headquarters in Ottawa. The Canadian Armed Forces, for example, have their base of operations in Ottawa.

There are also many technology-focused businesses in Ottawa, so many that the city has been referred to by some as “Silicon Valley North.” The tech industry employs more than 60,000 people at over 1,700 businesses in Ottawa. These companies cover a diverse range of focuses, like telecommunication, software development, and environmental technology.

Other major industries that employ many residents of Ottawa are the healthcare field — there are four general hospitals and several specialized hospitals in the wider Ottawa area — the finance sector, and tourism. About ten percent of Ottawa’s GDP is generated from finance-related activity, and tourism has become an increasingly important part of the economy.

The fact that the nation’s capital is in Ottawa attracts tourists to the city, as do its high quality accommodations and various festivals and family attractions. There are about 11 million tourists that visit the region each year, which generates over 3 billion dollars in total revenue. The industry also provides more than 40,000 jobs.

Among Canada’s major cities, Ottawa has the largest rural economy. This sector is supported by activities like agriculture, forestry, mining, construction, and other ventures. Over $1 billion is contributed to GDP from rural economic activity in Ottawa alone.

As Canada’s capital city, Ottawa is home to many government buildings, some of which appear to have been built with functionality as a guiding principle rather than aesthetic beauty. Others showcase interesting styles; the Parliament Buildings, for example, utilize a Gothic Revival architectural style.

Despite its status as a capital city and its fairly large size, Ottawa maintains a relatively low skyline. One of the reasons for this is that there are a multitude of laws protecting view planes within the city. This is to ensure that Parliament Hill is visible from many parts of the city.

Until 1965, buildings were not permitted to exceed 45.5 m (ca. 149 ft) in height so that the Peace Tower would remain the tallest building in the city. This restriction is no longer in effect, and there are now several buildings that are taller than 90 m (ca. 295 ft).

The design of the city includes a number of green spaces, which improves the liveability of the city significantly. The Ottawa Greenbelt is an example of how the government has prioritized green space in this area of the country.

The greenbelt borders the city of Ottawa, covering an area of more than 200 square kilometers (77 square miles) and is home to a variety of wildlife. This green space was created with the intention of limiting the expansion of the city and preventing an urban sprawl in the area. However, the best use of this land is currently being debated.

Ottawa also has numerous parks and city gardens. The city gardens are shared spaces where residents can use the land to grow food. There are around 4,300 hectares of parkland that are maintained by the city of Ottawa, and these include dog parks and play structures for children.

There are over 80 neighborhoods within Ottawa city limits, and they each have features that make them stand out from other areas of the city. Some are full of businesses, some have universities, others are mostly residential, and there are even some rural areas on the city’s outskirts.

There are many different cultural events and landmarks in the city of Ottawa. Some notable museums in the city are the National Gallery of Canada and the Canadian War Museum, though there are many others. The Canadian Museum of History, which is the most visited museum in Canada, is located just across the Ottawa River in Gatineau.

In addition to its museums, Ottawa has several theaters that host plays and musical performances. The Ottawa Symphony Orchestra and the Great Canadian Theater Company are both based in Ottawa. One notable theater located in the city is the Ottawa Little Theater, one of the oldest theaters in North America and Canada’s longest-running theater.

Ottawa is also the location of Winterlude, Canada’s largest festival. The festival is centered around the Rideau Canal Skateway, and there are many other attractions, such as a snow park with ice sculptures, special exhibits at museums, and music performances by DJs. Other notable festivals in the city include the Canadian Tulip Festival, the Ottawa Dragon Boat Festival, and Canada Day celebrations on Parliament Hill.

Of the twenty UNESCO World Heritage Sites in Canada, one is in Ottawa: the Rideau Canal. It has heritage status because it is the oldest continuously operated canal system in North America.

The religion with the largest representation in the city is Christianity, though many religions are represented in the city. There are places of worship for residents of Christian, Buddhist, Islamic, Jewish, Hindu, and Sikh faith throughout the city.

The largest ethnic group in Ottawa is European, making up about 70% of the population. Almost a quarter of the population is considered to be immigrants, and there are many different minority groups in the city. Almost 5% of residents are aboriginal.

Ottawa-Gatineau is the largest Canadian city that has two official languages: English and French. This bilingualism became part of an official business policy in the city in 2002, and much of the population can communicate in both languages. Multilingualism is common in this city, as there is also approximately 20% of the population that lists a language other than French or English as their mother tongue.

More than half of the Ottawa population has graduated from a college or university, giving it the reputation of being one of Canada’s most educated cities. It has the highest concentration of engineers and scientists per capita out of all of Canada’s cities, and there is a large population of resident PhD students. The two primary public universities in Ottawa are Carleton University and the University of Ottawa, which is the largest English-French bilingual university in the world.

As the capital of Canada, the government of Ottawa is greatly important. The city makes up a single-tier municipality, which essentially means that it does not belong to any larger regional or county government. Instead, it is responsible for all of its own municipal services.

The politics of the residents in the capital city are diverse and vary by neighborhood. Historically, the majority of the city has supported the Liberal Party, which is the longest-serving and oldest political party in Canada — it has dominated most of Canada’s politics since the country’s inception. Generally speaking, political and social views become more conservative toward the outer, more rural areas of Ottawa.