Samoan culture has a very long and complex history which includes great migratory movements, amazing feats and the whole history of its population. One of the most important aspects of the Samoan cuisine is represented by the fact that food is not heavily spiced as it is characterised by the use of coconut milk and cream. 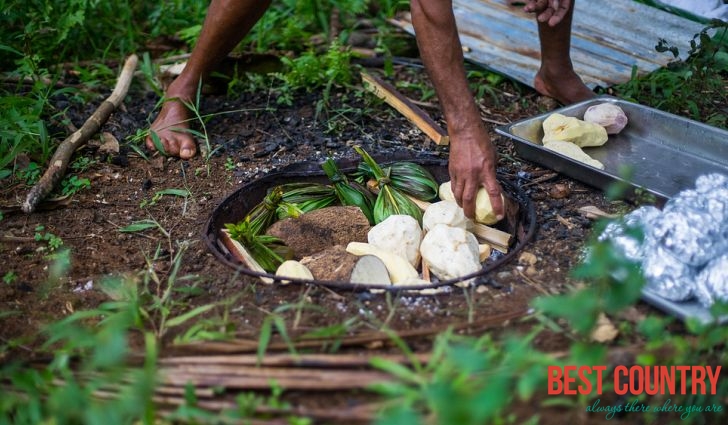 Some of the most popular Samoan foods include taro, bananas, coconut, breadfruit, and shellfish, or pork and Chicken. A very interesting, and in the same time unique method of cooking different kinds of food includes Samoan umu, a traditional above the ground stone oven heated by glowing hot lava rocks.

Thus, the food can be placed on the rocks and plaited in coconut fronds, or wrapped in banana leaves. Western Samoan inhabitants seem to be very keen on fishing, as fresh caught fish has been one of the most important Samoan dish.

The classic Western Samoan menu usually includes meat, such as Chicken glazed with honey. Taking into account that most of the Western Samoan dished are based on coconut milk and cream, it becomes obvious that Samoan food is not prepared with spicy ingredients.

At most of the Samoan feasts, the traditional fare is based on roast pig, Chicken, fresh seafood, fruit and breadfruit. The Western Samoan cuisine also contains a variety of Chinese food which can be found in a few places.

As far as national Samoan drink is concerned, this is called kava and it has a mild tranquilizing effect, being made from the ground roots of pepper plants. It is also drunk at the beginning of ceremonial gatherings and meetings. In Samoan cuisine most of the foods derive mainly from root vegetables, tropical crops, fresh fruit, coconut products, seafood, pork, and chicken.